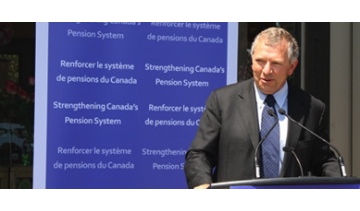 OTTAWA—Small business owners and self-employed people could soon have the option to set up pooled retirement savings plans (PRPPs).

The federal government is coming closer to creating legislation that would allow small businesses and self-employed people to pool money with other employers into PRPPs.

The large-scale, optional pooled plans would be managed by a regulated financial institution, which the government says would decrease the cost and complexity for a small employer.

Menzies is touring Canada and plans to speak with small business owners, financial institutions and other stakeholders before the end of August, with legislation tabled later this year.

He said it’s important for government to move fast.

“We found that there was a goodly amount of Canadians, probably over 60 per cent, that did not have any type of workplace pension plan whatsoever,” he said.

Provinces would also have to draft legislation since pensions are administered by both provincial and the federal governments.

Quebec was the first province to introduce the new system in its 2011-2012 budget. The province has said that it wants its counterparts to follow its lead.

Saskatchewan also has a similar plan, under which employees, self-employed individuals and/or their spouses can contribute up to $2,500 annually.

Both pooled pension plans and the controversial proposed expansion of the public Canada Pension Plan have been bandied about as a potential solution to aging Canadians’ retirement concerns.

The federal government has suggested the PRPPs would be a good alternative to increasing public plan costs as the global economy remains fragile.

“Talking to businesses, they were concerned about doubling their costs, or whatever the amount is, so they felt it was pretty important that we continue on this path,” Menzies said.

PRPPs would be a big boost for banks and other financial institutions, many of which are advocating the creation of a private-sector solution.

But critics say pooled plans, administered by banks and insurance companies, would leave out too many people because contributions would be voluntary.

The government has said a high level of regulatory harmonization across federal and provincial governments will be required to increase the scale of such plans.

Potential tax changes to accommodate those plans would be developed and implemented by the federal government.