The new production facility is MonoSol’s sixth manufacturing plant and its fourth in Indiana.

Against a backdrop of massive earth-moving equipment and stacks of structural steel, Indiana’s manufacturing base took another step forward at the ceremonial groundbreaking for MonoSol’s new plant in Lebanon, Indiana, on September 12.

MonoSol and its customers continue to benefit from major capital investments by its parent company, Tokyo-based chemical manufacturer Kuraray Group, LTD. The new $72 million, 150,000-square-foot production facility is MonoSol’s sixth manufacturing plant and its fourth in Indiana. The company makes water-soluble films for single-unit-dose laundry and dishwasher detergents, personal care, food ingredients and agriculture products as well as films that are used to improve manufacturing processes. MonoSol films are made of polyvinyl alcohol (PVOH), a biodegradable, non-toxic film that dissolves in water.

Construction on the site, located in the Duke Realty Lebanon Business Park, began early this spring. When the current plan is completed in late 2020, the company expects the facility to employ up to 90 workers. Founded in Indiana in 1953, MonoSol currently employs nearly 600 workers at its three plants in Northwest Indiana and its Merrillville headquarters. The company additionally manufactures its water-soluble films in the U.K. and Japan.

Company leaders and employees were joined by local and state officials to celebrate the groundbreaking. MonoSol President and Kuraray Executive Officer P. Scott Bening said the project is designed to enhance the company’s proximity to its growing global customer base and provide a degree of geographic diversity.

“MonoSol serves many of the largest consumer products companies in the world,” said Bening. “Building this new facility in Lebanon positions our company to continue growing alongside of them, while also proving that world-class companies can be born and grow right here in Indiana.”

Lebanon Mayor Matt Gentry, said MonoSol’s commitment is one of the largest in a string of new investments planned for the city in recent months.

“MonoSol was recently recognized amongst the nation’s best and brightest companies to work for and I am pleased that they have chosen to locate their first central Indiana facility in Lebanon,” said Gentry. “We look forward to seeing them thrive in our community.”

“MonoSol is a great example of the kind of manufacturer and international investment we are working to bring to Boone County,” said Whitehead. “We look forward to a productive relationship with the company in the years to come.” 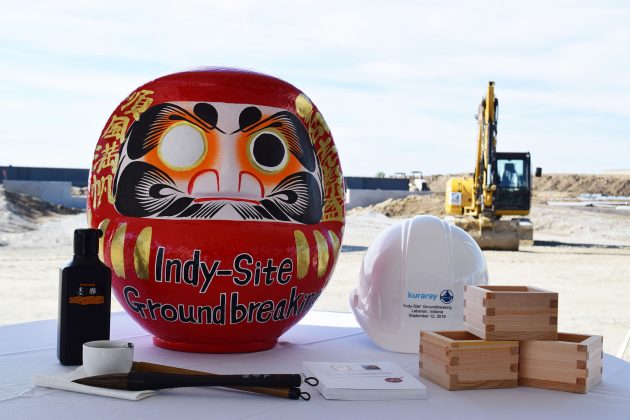 A Daruma doll is one of the most popular lucky charms in Japan and helps fulfill wishes.

“MonoSol has been a great partner to the state for many years, and we are excited to help break ground on the company’s fourth facility in Indiana,” said Helmling. “Indiana and Japan share a strong relationship because of companies like MonoSol and its parent company, Kuraray Group. We are grateful for their continued commitment to Indiana and look forward to the new, quality jobs they will create in Boone County.”

Company and local officials also participated in a traditional Japanese “Daruma” good luck ceremony. A Daruma doll is one of the most popular lucky charms in Japan and helps fulfill wishes. At the beginning of an important project, leaders paint one eye of the doll. Upon project completion, the other eye is painted in celebration of wishes being fulfilled.

Construction at the site is being led by The Ross Group, Inc. with facility design by Virtue Architects. Cushman & Wakefield supported site selection and acquisition.