Improvement there, but weak in Canadian manufacturing sector

Survey respondents commented on generally subdued client demand and a further slight reduction in new export work. This contributed to more cautious staff hiring policies in August and the fastest decline in purchasing activity since the start of 2016. 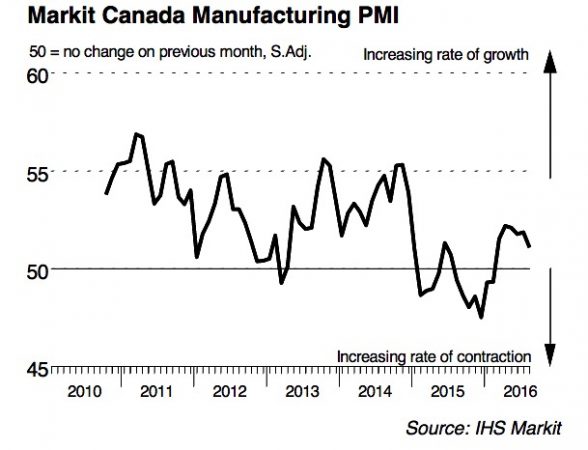 Adjusted for seasonal influences, the Purchasing Managers’ Index (PMI) registered 51.1 in August, down from 51.9 in July, to signal a marginal overall improvement in business conditions. The headline index has now posted above the 50.0 no-change mark for six months running, but the latest reading was the weakest recorded during this period.

Canadian manufacturers pointed to the slowest rise in production levels for six months in August. Anecdotal evidence suggested that subdued demand conditions and strong competition for new work had acted as a brake on output growth.

Reflecting this, the latest upturn in new order volumes was much weaker than the 16-month peak seen in April.

Softer growth of incoming new work was linked in part to another drop in export sales, although the rate of decline was only marginal. A sustained fall in new work from abroad during August contrasted with the solid rates of expansion seen earlier in 2016.

In line with the trend for production and new orders, latest survey data pointed to a slower pace of job hiring during August. Higher levels of employment have been recorded for six months running, but the latest expansion was the slowest since March.

Some firms noted that uncertainty about the demand outlook had led to more cautious recruitment plans and, in some cases, the non-replacement of voluntary leavers.

Meanwhile, supply chain pressures continued in August, despite another moderate drop in purchasing activity. Longer delivery times were partly linked to low stocks and capacity constraints among vendors. August data also signaled another robust rise in manufacturing input costs, which firms attributed to higher steel prices and exchange rate depreciation. However, the overall rate of cost inflation eased to its slowest since April. At the same time, factory gate charges rose only modestly.

Tim Moore, senior economist at survey compilers IHS Markit says, “The latest PMI survey indicates that Canada’s manufacturing sector continues to struggle for momentum, with production growth easing back to its weakest for six months. A combination of subdued domestic demand and lower new export orders were the main factors weighing on output volumes in August. At the same time, manufacturers indicated a renewed slowdown in job creation, reflecting a lack of pressure on operating capacity and ongoing uncertainty regarding near-term growth prospects.”

Cheryl Farrow, president and chief executive officer with SCMA (Supply Chain Management Association) notes: “August was another month of steady but unspectacular growth across Canada’s manufacturing sector. The latest data pointed to the slowest improvement in overall business conditions since the upturn began in March, partly reflecting a weaker contribution to growth from export orders. There were also signs that manufacturers have become more cautious about hiring, reflecting lingering concerns about the demand outlook.

“There were some encouraging signs across the provinces in the latest PMI figures. After a long downturn, manufacturing firms in Alberta & B.C. indicating a sustained expansion in production volumes during August.”

The Markit Canada Manufacturing PMI Report is based on data compiled from monthly replies to questionnaires sent to purchasing executives in over 400 industrial companies.

About Supply Chain Management Association
The Supply Chain Management Association (SCMA) is Canada’s largest association for supply chain management professionals representing 7,500 members, as well as the wider profession working in roles that cover sourcing, procurement, logistics, inventory, and contract management. SCMA sets the standards for excellence and ethics, and is the principal source of professional development and accreditation in supply chain management in Canada. More at www.scma.com.

About IHS Markit
IHS Markit is a world leader in critical information, analytics and solutions for the major industries and markets that drive
economies worldwide. The company delivers next-generation information, analytics and solutions to customers in business, finance and government, improving their operational efficiency and providing deep insights that lead to well-informed, confident decisions. IHS Markit has more than 50,000 key business and government customers, including 85 percent of the Fortune Global 500 and the world’s leading financial institutions. Headquartered in London, IHS Markit is committed to sustainable, profitable growth. More at www.ihsmarkit.com.

About PMI
Purchasing Managers’ Index (PMI) surveys are now available for over 30 countries and also for key regions including the eurozone. They are a closely-watched business survey, favored by central banks, financial markets and business decision makers for their ability to provide up-to-date, accurate and often unique monthly indicators of economic trends. To learn more go to www.markit.com/economics.

Image above purchased via www.fotolia.com.