Fast growing Two Roads Brewery, located in Stratford, CT, needed a solution to problems with outdated tank-based glue equipment used to seal cardboard packaging. The equipment was causing downtime, jeopardizing their production goals. They eventually opted for a technology upgrade, the InvisiPac Tank-Free Hot Melt System, which has reduced their downtime, freed up operations personnel for more productive tasks, and improved the efficiency of their packaging process.

Brewery seeks solution for sticky situation
Two Roads Brewery is one of the fastest growing craft breweries in the Northeast. Since beginning operations in 2012, Two Roads has increased production to 121,000 barrels per year. The proud member of the emerging craft brewing fraternity brews its signature beers in a beautifully restored 100-year-old factory in Stratford, CT.

After cleaning, scraping and painting the old brick, wood, and steel of the former metal forming machinery company, they added the latest state-of-the-art brewing and fermenting equipment. Soon after they began operations, they found their production line growth hampered by frequent plugging of the tank-based hot melt delivery equipment they were using to glue boxes together. On the factory’s second floor, cardboard boxes are unfolded by the case erector; the bottom of each box is glued and sent down to the bottling facility. After the bottles are filled, they are sent to another machine to be loaded into cases, which are then sealed on top using another hot melt unit.

As Two Roads’ packaging team explains, there were issues with the glue system, which was used equipment Two Roads had inherited. The system took nearly an hour to heat up, putting pressure on the production schedule. In addition, they were experiencing char, which is by far the biggest problem in any hot melt application system.

Char occurs when the properties of the adhesive are altered through thermal and oxidative degradation. Char results in hard clumps that have lost their thermoplastic nature and will not flow. [1] This charring was a key cause of the nozzle plugging Two Roads experienced.

The system was also subject to human error – operators frequently had to ask, “Did someone turn on (or turn off) the glue machine?” The long startup time resulted in a loss of valuable production time if the machine hadn’t been turned on. To make matters worse, Two Roads was told by the vendor that the system was being phased out and they would not be able to buy replacement parts. “We asked our glue supplier for a recommendation for a new unit, since there is a marriage between the materials and machinery.”

Chester Duff, adhesive division manager of Astro Chemicals, Inc., says that he jumped at the chance to help Two Roads update their equipment with more advanced technology. Astro had previously helped Two Roads with a labeler and packaging equipment, and supplies them with glue and other chemicals used in beer manufacturing, as well as cleaning agents.

Duff had already been investigating a system from Graco, the InvisiPac Tank-Free Hot Melt System, which showed promise in improving productivity and ease of operation in hot melt applications. The system was designed to reduce char and completely eliminate the frequent plugging of nozzles in glue systems. The system was also designed to stabilize glue consumption rates and reduce both adhesive waste and waste in the form of boxes that need to be repacked or resealed because of an inadequate seal.

“Glue nozzle plugging is an industry-wide issue that had previously been considered a given,” says Duff. He says the issue is rampant, and up to this point in manufacturing it had been as common as breathing. “Companies like Two Roads have just had to keep plenty of nozzles on hand and stop the line whenever they needed changing.” Duff says this particular equipment had to be changed three times a week, and since it was a 4-nozzle applicator it had a major impact on downtime.

Having to stop the line for packaging issues can result in a significant time loss. This type of packaging downtime translates to a huge amount of lost revenue. Breweries have a production schedule to keep that may involve, perhaps, three different beers that must be canned or bottled on a particular day. Once the beer is in the filler, it cannot be stopped or it backs up the whole system.

The cost of downtime varies, but Duff estimates it can range from about two thousand dollars per hour to tens of thousands per hour, depending on the size of plant. If a nozzle is plugged once a week and takes 15 minutes to fix, that is equivalent to an hour a month or 12 hours a year. At a cost of say $3,000 dollars an hour, that would be $36,000 per year. If it happens 2-3 times a week, costs really add up, especially if the plant runs 24/7.

New technology introduced
When he first saw the new InvisiPac system, Duff was not an instant convert, wanting conclusive proof it was going to work before recommending the system to customers. He became a believer after installing the technology at a nearby glass beer bottle manufacturing plant with extremely challenging conditions. The company had such severe plugging that it used and discarded two nozzles each day. From the instant the InvisiPac went online the new equipment performed flawlessly, virtually eliminating downtime due to glue nozzle plugging. Duff reasoned if the system could perform so well in a harsh environment polluted with airborne contaminants, it would be a good fit for the sparkling shiny new facility that was Two Roads.

“This is technology that I believe will revolutionize the industry, which has been depending on what I call the “crock pot” system for 70 years,” says Duff. The analogy refers to the fact that most glue systems sit with glue in the unit like pot roast in a crock pot – slowly cooking for hours and leaving a residue of grease around the pot; with the hot melt system, the glue cooking for many hours causes charring that leads to nozzle plugging.

Testing the new technology
Astro Chemicals arranged to bring in the technology at no charge to demonstrate its effectiveness. If the system did not perform as promised, Astro agreed in advance to remove it and replace it with Two Roads’ old system. The arrangement reduced the risk for Two Roads, ensuring positive results before they made the investment in new equipment. 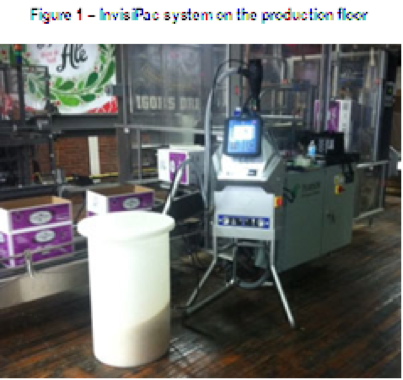 They installed one InvisiPac Hot Melt System in December 2013 and added another unit in August 2014. Since they pushed the button the first time two years ago, the technology has worked like a charm. Two Roads has never even had to change the filter or replace a plugged nozzle. Only after switching to the new equipment did they realize how much smoother their process went without having to live with the constant issue of plugged nozzles. Figure 1 shows the InvisiPac system in action.

The feature Two Roads actually appreciates most is that the unit takes a mere ten minutes or less to warm up, compared to their hour-long wait with the old system. If there is a human error (someone forgets to turn on the glue unit) it takes just a few minutes to rectify the mistake and move forward. In addition, there is no more need to assign valuable personnel to check on glue levels and keep them properly filled. Rather than constantly starting and stopping and performing glue nozzle replacement, the new system frees up operator manpower for more productive upstream or downstream tasks.

According to Two Roads, the automated aspects of the new equipment are a huge help, protecting the production line from human error. For example, if the unit does not dispense glue within an hour, it automatically shuts off. Before, there were instances where the unit could be running at high temperature over the weekend.

Most recently Two Roads added an InvisiPac Pattern Control System, which gives them better control over glue dispensing to seal major and minor flaps on their cardboard cartons. The new integrated pattern controller allows operators to accurately place precise amounts of adhesive and save money by converting from a solid bead to a stitched bead with the push of a button. The integrated pattern controller is another key automation feature, with all of the programming, startup and shutdown right at the operator’s fingertips. 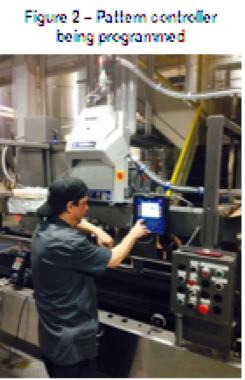 “For the glue pattern, we can just type in numbers. We now have recipes and the machine remembers everything. We have the ability to change things on the touchpad rather than dealing with dials and just hoping to get the settings right. The complete automation of the Graco unit is something we are really loving.” Figure 2 shows an operator programming the new InvisiPac pattern controller.

Installation was quick and painless. Graco provided the equipment as a complete plug-and-play unit, and the old system was easily removed. After training, Two Roads was given operating manuals and contacts for technical assistance. The only time they’ve had to call, it turned out to be a user error, but operators appreciated that someone is available to help with any issue at any time.

The wow factor
Since the installation at Two Roads, Astro Chemical’s Chester Duff reports that he has installed numerous systems. “There’s a significant wow factor,” he says. First of all, the equipment has a sleek industrial design – he says it looks like an ATM or perhaps R2D2. It comes up to temperature so fast, which is a boon to many plants. Rather than having to pay overtime for a production person to come in to turn on the system to be ready for an 8 a.m. shift, an operator can flip the switch and a low application temperature hot melt can come up in just a few minutes.

“The other wow factor is down the line when you realize you don’t have to touch it. It’s called InvisiPac system for a reason. It is invisible to the operator. You never have to touch it. You can go about your business and do other things.”

While energy use was not a specific issue for Two Roads, the equipment’s reduction of energy costs is drawing a great deal of attention at other plants. The new technology uses much less energy on startup. The hoses use less energy than industry standard; additional hose insulation provides up to 66°F cooler surface temperature, resulting in less lost energy to the environment. The system’s features allow users to improve their production sustainability, demonstrating they are leaving a smaller footprint when manufacturing a product. 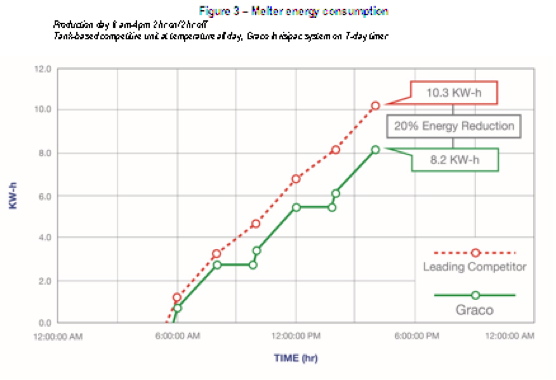 Figure 3 shows laboratory test results that compare the glue melter energy consumption of the InvisiPac system and a specific competitor’s unit, demonstrating a 20 percent reduction in energy use.

The packaging team concludes by saying that Two Roads has been extremely satisfied with the Graco equipment, support and service. He gave a special shout out to Anthony (Tony) Horelik, Graco’s local area sales manager, who personally oversaw installation and would not leave until the customer was up and running.

He jokes that Tony thinks of the machines as his babies, and comes back from time to time to check on how they are doing. Tony insists he stops by for the beer.

“I believe he would do anything for us, but his products run so well that he doesn’t have to. I have recommended these units to plant personnel at other breweries, and I especially like to point out how their automation solves the problem of human error.”