Germany’s new president Frank-Walter Steinmeier kicks off his country-wide tour with a stop at Krones facility.

To kick off his tour of Germany, which he had previously announced in his inaugural speech, Germany president Frank-Walter Steinmeier and his wife and judge Elke Büdenbender on April 26-27, 2017, visiting the Krones AG plant in Rosenheim, Germany.

The facility is Krones’ second-largest production facility, and the region’s biggest employer, manufacturing packers and palletizers for all output ranges.

During a tour of the production halls, president Steinmeier was briefed on Krones and its operations. Cordial, visibly interested, and asking numerous insightful questions, he made a highly favorable impression on Krones AG’s Executive Board chairman Christoph Klenk and board member Thomas Ricker, plant manager Dr. Helmut Schwarz and Krones supervisory board chairman Volker Kronseder. 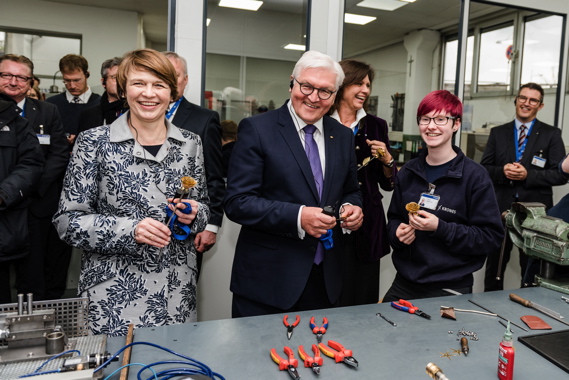 For Krones’ facility in Rosenheim and for the company as a whole, with all its staff, it was a great honor to host the country’s President.

Plant and divisional manager Dr. Helmut Schwarz believes the Krones plant in Rosenheim is a fitting tribute to the facility’s evolution, since Krones is a major economic driver in Rosenheim and the surrounding region, and draws its employees from an area extending far beyond Rosenheim itself. Krones in Rosenheim is vitally important for the company, as evidenced by the 100 million euros that Krones has invested in this facility over recent years.