Rob Gronkowski urges teens not to put their life at risk by eating Tide liquid detergent pods as part of a dare.

Life as a teenager is challenging enough without having to throw down with inane peer-pressure challenges.

Teenagers have been challenging each other to do stupid things since there was such a thing called a teenager. The Washington Post recently reported teen performing such dares as pouring bath salt onto the hands and seeing who can hold it the longest as it burns, or pouring rubbing alcohol on themselves and then setting themselves on fire.

If that wasn’t bad enough, teens trying to become Internet famous are now daring others to put Proctor & Gamble‘s Tide liquid laundry pods into their mouth, chewing it and spewing it.

After the liquid laundry pods were introduced, almost right away warnings via commercial advertisements have been released – but always as a means to warn parents to keep the pods away from small children who might mistake the brightly colored liquid pods as something they can eat, but do contain a highly concentrated toxic detergent.

But youth daring one another to eat the pods?

In 2018 alone, The Washington Post says that there have been 37 cases reported of teens ingesting the pods, half of them intentionally, which makes one wonder just what the others were thinking “unintentionally”.

Swallowing the contents of a liquid laundry detergent pod can cause vomiting, difficulty in breathing and a loss of consciousness, with eight fatalities reported in children aged five and younger.

As such, Tide, in an effort to dissuade youth from participating in such dares, along with various consumer safety agencies are working with a bit of star power to explain to teens the risks associated with the dare. 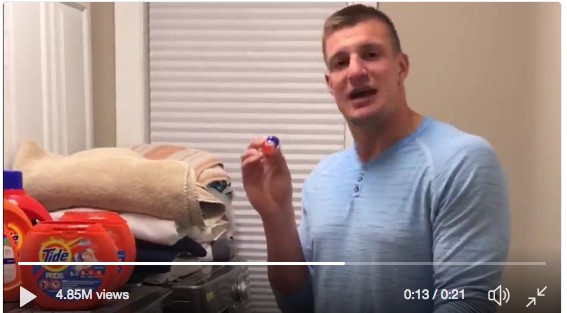 What should Tide PODs be used for? DOING LAUNDRY. Nothing else.

Eating a Tide POD is a BAD IDEA, and we asked our friend @robgronkowski to help explain. pic.twitter.com/0JnFdhnsWZ

And Dua Lipa, an English singer, songwriter and model: 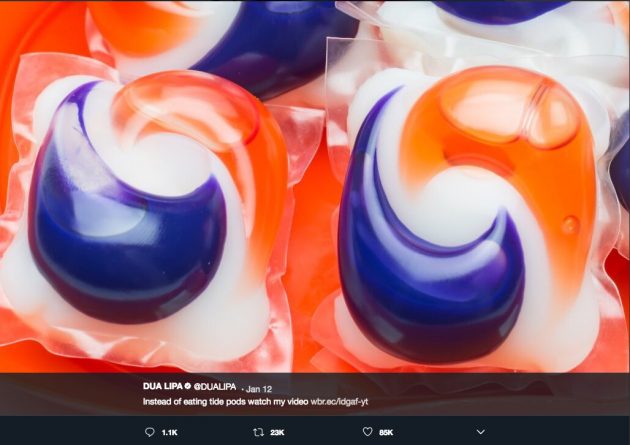 Instead of eating tide pods watch my video https://t.co/UC7l18CXP0 pic.twitter.com/5P7BA4ATX0