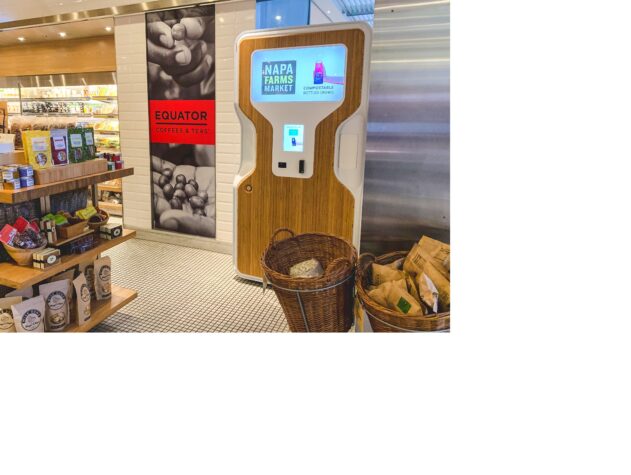 June 25, 2020 – A California business that has designed a new way to manufacture and distribute drinks while also eliminating the environmental and financial impact of bottled water has won the green vector award from igus.

igus, the Germany-based manufacturer of motion plastics, runs its North American operations out of Providence, R.I. The green vector award, which is being presented for the first time, recognizes businesses for the use of igus products in sustainable applications.

“We are proud to be partnered with such a forward-thinking, socially responsible company like Drop Water, and we wish them many years of success as we all join the movement to keep our planet clean and pollution free for all future generations,” said Rick Abbate, Vice President of igus.

Drop Water, which was founded in 2014, ships empty containers in cone-shaped stacks to robotic kiosks at airports and other venues. The compostable containers are filled with tap water that is filtered at the point of purchase. The water can be flavored, include caffeine, and adjusted to a specific temperature. Drop Water decentralizes the bottle filling process, with the self-serve kiosk working as a mini-bottling plant.

The business is much more environmentally friendly than traditional bottled suppliers. The process eliminates shipping and its containers are compostable. In 2017, consumers used approximately 480 billion bottles of water, according to Drop Water.

In designing its machine, Drop Water started seeing movement errors in linear motion components. Cables slowly rotated after each cycle, and after more than 1,000 cycles cables became twisted and bunched up in tracks. Copper inside the insulation broke.

The company also had large linear motion components that it had to buy, cut, modify, and assemble, and wanted a better solution for production.

The igus products include W- and N-series rails and carriages, as well as e-chain cable carriers and chainflex cables. Besides the self-lubricating properties of the igus components, Drop Water also valued the products’ long service life and high reliability.

Drop Water’s first kiosks were installed at airports in California, and more are on the way. “We’re reinventing how bottled drinks are manufactured and distributed so they’re way more efficient and eco-friendly,’’ CEO Scott Edwards said. “We’re doing that with robots and eco-friendly materials.”