This ruby chocolate is made from the Ruby cocoa bean without color, berries, or berry flavor added.

Chocolate aficionados will know that there have been only three types of chocolate until now: dark chocolate, milk chocolate, and white chocolate, which only made its debut 80 years ago.

The Ruby cocoa bean, according to Barry Callebaut, is unique because the fresh berry-fruitiness and color precursors are naturally present.

The fourth type in chocolate offers a totally new taste experience, which is not bitter, milky or sweet, but a tension between berry-fruitiness and luscious smoothness. To create Ruby chocolate no berries or berry flavor, nor color, is added.

Sourced from different regions of the world, the bean has a specific set of attributes that Barry Callebaut has managed to unlock through an innovative process that took many years to develop.

According to quantitative research performed by independent international market and consumer agency Haystack, Ruby chocolate meets a consumer need no chocolate ever did before. It’s expected that Ruby, like Dark, Milk and White chocolates will be introduced in different product categories. 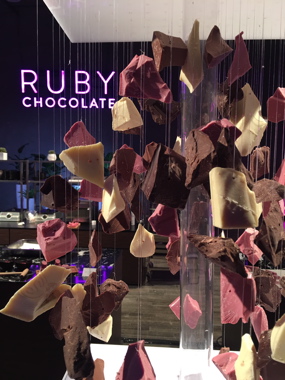 The four types of chocolate: dark, milk, white and the new ruby from Barry Callebaut Group.

The invention of Ruby chocolate is the work of global R&D centers of Barry Callebaut, based in France and Belgium—part of a global network of 28 R&D centers—Jacobs University, and over 175 years of expertise in sourcing and manufacturing.

Ruby chocolate has been tested and validated through extensive consumer research run by independent global research agencies Haystack and Ipsos in the U.K., U.S., China and Japan.

As part of these studies, Ruby’s consumer appeal and purchase intent have been tested, indicating consumers would buy Ruby chocolate at different price points.

Barry Callebaut chief innovation and quality officer Peter Boone says: “Barry Callebaut has established itself as a pioneer and innovator in chocolate and cocoa, globally. Consumer research in very different markets confirms that Ruby chocolate not only satisfies a new consumer need found among Millennials – Hedonistic Indulgence – but also high purchase intent at different price points. We’re looking forward to working with our partners on introducing this innovative breakthrough to the market and making the new Ruby chocolate category available to chocolate manufacturers and consumers around the world as the fourth reference next to Dark, Milk and White chocolate.”

Ruby chocolate was revealed at an exclusive launch event in Shanghai, China, on September 5, 2017.

About Barry Callebaut Group:
With annual sales of ~US$6.8 billion in fiscal year 2015/16, the Zurich-based Barry Callebaut Group is the world’s leading manufacturer of high-quality chocolate and cocoa products – from sourcing and processing cocoa beans to producing the finest chocolates, including chocolate fillings,decorations and compounds. The Group runs more than 50 production facilities worldwide and employs a diverse and dedicated global workforce of close to 10,000 people.  The Barry Callebaut Group serves the entire food industry, from industrial food manufacturers to artisanal and professional users of chocolate, such as chocolatiers, pastry chefs, bakers, hotels, restaurants or caterers. The two global brands catering to the specific needs of these Gourmet customers are Callebaut and Cacao Barry.  The Barry Callebaut Group is committed to make sustainable chocolate the norm by 2025 to help ensure future supplies of cocoa and improve farmer livelihoods. It supports the Cocoa Horizons Foundation in its goal to shape a sustainable cocoa and chocolate future. Company information at www.barry-callebaut.com.