In an effort to better monitor fruit during transportation, the Swiss-based Empa (The Swiss Federal Laboratories for Materials Science and Technology) has created a non-invasive method to measure the core temperatures of fruits.

The key word is “non-invasive”.

While the standard sensors could be placed within a transport vehicle to measure ambient temperature air surrounding fruit, the only way to accurately measure the interior of the fruit is to physically stick a sensor through the skin into the center of it. But that has its drawbacks.

While accurate, a sensor technician would take a fruit from a corrugated tray or box from the outer edge of a pallet… but what about fruit closer to the pallet center? Transported fruit would be better refrigerated on the outer areas than elsewhere. Which fruit from where?

Some countries will order the destruction of a fruit shipment if it has not been stored at a certain minimum temperature for a three-week period.

Proper refrigeration not only maintains product freshness during transportation, but will kill insect larvae that could have nested within the fruit.

Empa’s artificial fruit sensors are being developed for each type of fruit—even for different varieties, currently having completed sensors that mimic the size and shape of: Braeburn and Jonagold apples, Kent mangoes, oranges and Cavendish bananas. 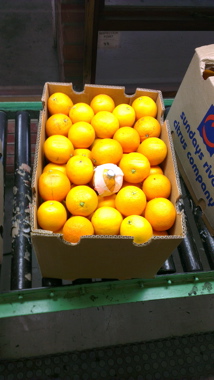 An Empa orange sensor within a shipment of orange fruit.

To create the Empa sensors for individual fruits, it uses an X-Ray to inspect it, and then uses a computer algorithm to create an average fruit shape and texture.

The Empa team then determines the exact composition of the fruit’s flesh based on a combination, usually, of water, air and sugar.

They then recreate the formula in the laboratory using a mixture of water, carbohydrates and polystyrene.

A mould is then created using the laboratory mixture and a 3D printer – two halves. The sensor is hand-placed inside this artificial fruit where it accurately records data, including fruit core temperature.

According to Empa, there are other sensors—such as a ball filled with water and a sensor inside—that do what its fruit-lookalike sensor does, but says when comparing, the Empa sensor provides more accurate data because it simulates the behavior of real fruit more reliably at different temperatures.

The Empa sensors are still in the starting stage of development. The data the sensors collects now is only accessible once the fruit is unpacked at the shipment destination… and if the fruit was spoiled during transport, the sensors would only be able to show when in the journey shipment temperature’s became too high.

The company is looking to create a wireless fruit mimic sensor to transmit data that could advise transport drives enroute of temperature spikes before an entire shipment is spoiled.

In the “don’t-quote-me-I’m-ballparking-here” stage, Empa estimates that the cost for a sensor would be about 50 Swiss Francs or about CDN $67, but likely more if a wireless sensor could be developed.

All images courtesy of Empa.