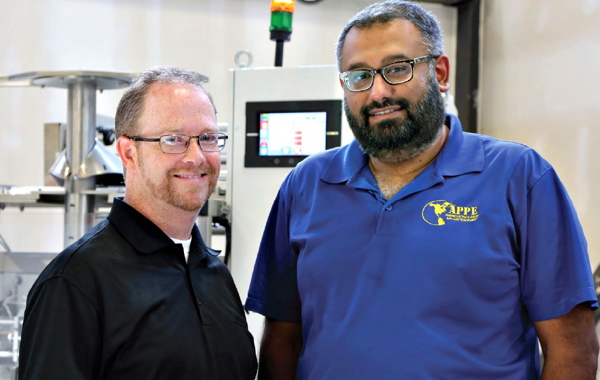 In this Olympic year, there’s a lot of pride in being able to call one’s self No. 1, or to be able to represent one’s country as the best athlete on the planet—and there’s certainly nothing wrong with earning the right to do so through hard work and dedication.
In the Canadian packaging industry, while there is certainly a fair bit of chest-thumping, for the most part companies refrain from ego saturation and simply go about their business creating equipment that they hope will be the next big thing to bring home the gold.
For one such company—Cambridge, Ont.-based APPE (American Packaging & Plant Equipment)—it has plumbed exciting new technology, originally designed and manufactured its own brand of equipment to become the first company in Canada to offer a Canadian-built continuous motion VFFS (vertical form/fill/seal) bagger fitted with ultrasonics to provide a faster seal than conventional heat seal methods.
The key word is ‘continuous’.
Unlike traditional continuous and intermittent baggers, the sealing jaws are always hot and require a lot of energy to perform, the ultrasonic method is a greener solution that does not require heat to seal the film.
Ultrasonic refers to sound vibrating at a frequency far above what a human being can hear—anything over 20,000 Hz (hertz), the sound waves generate heat by energizing the inner molecules of the film’s sealing surface under pressure.
Situated in a modern 6,000-square-foot facility in an industrial corner of picturesque Cambridge, APPE employs six people: one sales; three mechanical; one electrical; and one jack of all trades, Al Aman the affable director and national sales manager.
“We’re a small company, to be sure,” Aman told Canadian Packaging magazine during a recent visit to the facility APPE moved into in November of 2015, “but we are getting busier, a key factor in us moving shop from London west of us to Cambridge last year. Our new facility is strategically located within one-hour drive of London, Hamilton and Toronto.” 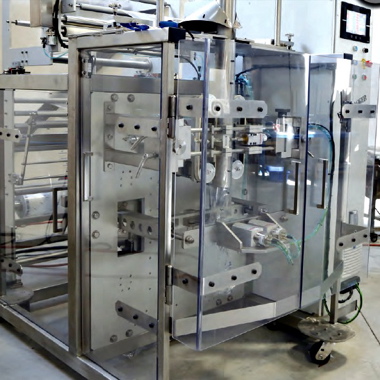 Even prior to APPE opening its doors in 2007, Aman says he first cut his teeth in the packaging industry as part of a sales team working for a company that  manufactured blister packaging in Montreal.
“I learned more than just sales, as I was able to pick the brains of some great Canadian packaging industry experts there, as well as at some other companies in similar fields,” notes Aman, “until I finally had the wherewithal to run my own business.”
He says that when APPE first entered the industry, it did some small project builds of miscellaneous packaging equipment, but also sold some equipment manufactured overseas, that APPE would tweak to ensure it was approved to Canadian safety standards.
“We would also add in our own software into the machine,” relates Aman. “So even though the equipment was originally from an offshore country, we made sure it was engineered here in Canada and made to comply to our country’s rigid specs.”
While the company’s beginnings helped establish it as a turnkey bagging machinery supplier, APPE quickly expanded its offering, continuing to provide an offshore line of equipment that it still modifies and adapts to customer’s region; but also its own a premium line of equipment it designed and built itself.

A pair of Branson ultrasonic sealing jaws for horizontal seal on the Vertobagger 2.0 from the Cambridge, Ont.-based packaging equipment manufacturer APPE.

Of course, it is the company’s design capabilities to manufacture the first continuous motion vertical bagging machine in Canada, according to APPE, that can perform at high speeds while using various types of biodegradable packaging materials, a difficult proposition to utilize at best owing to the thinness of film that is a staple of the green industry.
Features of the Vertobagger 2.0 include:

“All of the benefits are environmentally-friendly,” notes Aman.

Utilizing the Vertobagger 2.0 as its base, APPE has built the first of its kind in Canada continuous-motion ultrasonic vertical form/fill/seal machine that can apply vertical and horizontal seals with ultrasonic that works extremely well with the thin biodegradable materials.
“Our Vertobagger 2.0 vertical form/fill/seal continuous bagger is available in two versions, with and without ultrasonic,” mentions Aman.
While the Vertobagger 2.0 ultrasonic bagger can perform at speeds up 130 bags per minute, the non-ultrasonic version can churn out up to 180 bags per minute.
“The chief advantage of going with the ultrasonic version are the savings,” Aman explains, adding that “the packaging integrity is also much better with liquid products, traditionally a challenge for heat seal applications.”
Both Vertobagger 2.0 VFFS bagging machine versions are capable of handling up to a 12-inch wide bag, and each utilize six Omron servo motors digitally-geared for synchronous motion that provides unique patent-pending tension control of the film to ensure proper tension of film, even with inner packaging materials.
As well, APPE says that the Vertobagger 2.0 is the only machine in the industry capable of handling high speeds with green aka biodegradable film structures.
The Vertobagger 2.0 uses the ultrasonic technology to seal the stand-up bags, providing a very thin seal along the top and bottom of the bag.
Savings are realized in material because standard baggers that use heat-seal technology will utilize more film to produce the same seal—it’s wider, this more material is required—as that provided by the ultrasonic method.
Energy savings are realized via ultrasonic technology, as standard sealing technology requires ‘ovens/heaters’ to be utilized to heat up and melt and seal the plastic film together.
“There’s also the fact that ultrasonic technology will not accidentally ‘cook’ or heat the product that was filled in pouch or bag,” Aman relates.
“Instead, it vibrates product out of the sealing area ensuring a clean seal all the time. And, the machine requires less maintenance,” he adds.
“If you fill green leaf produce in a bag that is heat-sealed, a lettuce leaf could get caught in the sealing area of the bag, which could further cause improper seals and a short shelf-life which could involve chargebacks from retailers to the packers,” explains Aman.
“That can not happen via ultrasonics,” he says. “In such cases, we can guarantee a better seal integrity and longer shelf life than with standard sealing technology.”
Capable of working with bag widths of two- to 12-inches, and lengths of two- to 25-inches, the Vertobagger 2.0 is very versatile, that Aman calls one of the most simple and most advanced vertical bagging machines in the market.
“We engineered the Vertobagger 2.0 to be a robust continuous motion bagging machine able to perform 24-hours-a-day, seven-days-a-week production,” describes Aman. “It is precisely engineered and manufactured and built with pride in Ontario.
“We maintain tight tolerances in our manufacturing process,” he continues, “utilizing fantastic automation components from both ASCO and Omron.” 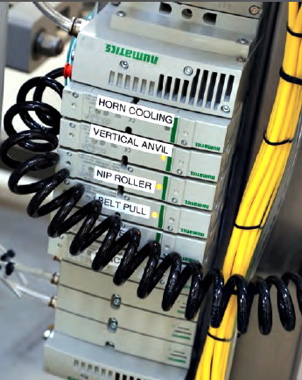 A tower of Numatics G3 Fieldbus that controls all air cylinders within the Vertobagger 2.0 when the PLC provides a signal to the fieldbus to activate.

One of the key technologies required for the Vertobagger to be able to construct pouches and bags with thin films like the biodegradable materials is its ability to transport film from the rollstock to the sealing area with its unique technology, which prevents the film from ripping and tearing anywhere within the process.
“A ripped bag means product loss, and that helps no one,” admits Aman.
For APPE and its equipment builds, it uses the pneumatic fluid power designed and manufactured by ASCO, a division of Emerson.
ASCO’s pneumatic solutions offer packaging equipment OEM (original equipment manufacturers) and machine owners a reliable, cost-effective design, along with excellent fieldbus and I/O connectivity, and can be used in machinery applications for food and beverage, pharmaceutical, and consumer packaging segments.
Parent company Emerson not only counts ASCO, but also Numatics, SOLA and Branson under its umbrella, and all are suppliers of parts to APPE’s Vertobagger 2.0 VFFS bagger technology.
The Vertobagger 2.0 uses a Branson 30kHz ultrasonic rectangular slotted balun-style horn that is designed to use multiple converters to provide more power for the sonic welding, meaning the VFFS bagger has some giddy-up in helping it quickly form and seal bags. 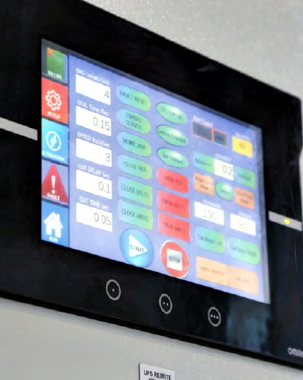 An Omron HMI (human-machine interface) on the Vertobagger 2.0 used by the operator to set-up and monitor the packaging run.

Other equipment in the Vertobagger 2.0 manufactured by ASCO, include: 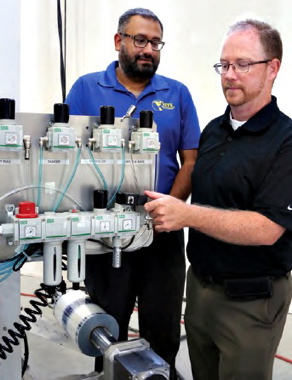 APPE’s Al Aman (left) and ASCO’s John Lamb examining the Vertobagger 2.0’s Numatics air prep devices air regulators (smaller ones on top), and the larger FRL – filter regulator with air purge that cumulatively cleans and filters impurities from the air entering the machine, as well as removing all air when the Emergency Stop button is pressed.

According to ASCO national segment manager for packaging, food and pharmaceuticals John Lamb, the Canadian-made OEM of parts only joined forces with APPE in early 2015.
“We manufacture our parts in Brantford, Ont.,” says Lamb, “but along with selling equipment to APPE, I feel that ASCO really does perform as their partner, too.
“Every project that APPE earns, we have been involved in the brainstorming process injecting our thoughts on how ASCO pneumatics can improve each aspect of their prospective bagging machine,” explains Lamb.
Aman concurs: “The knowledge they bring with their parts, as well as the service—and camaraderie—they bring to the table, is superb.
“Couple that with a wide range of product offerings and a quick delivery for their robust parts, we are very content with our working relationship with ASCO.”
He continues: “What I like about ASCO is the fact that their components are simple, robust and user-friendly, which brings the type of character we want to use in our machine. Their philosophy and our philosophy seem to match well.
“And there’s also an aesthetic appeal to the ASCO products, as their cylinders are better-looking when compared to similar products in the market.” 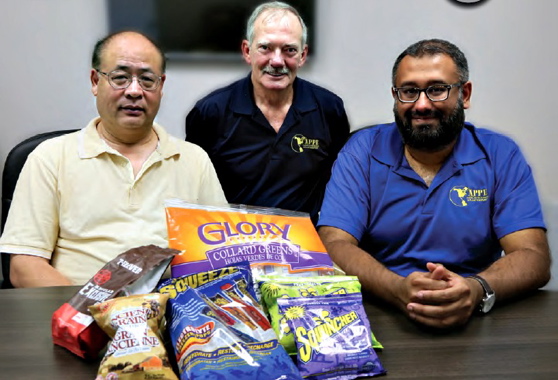 Aman notes that because his company is small, he appreciates the way ASCO treats APPE like a big enterprise, but still maintains a favorable price-point on their components.
“While price affects large companies as well as small, compact businesses like APPE do not have a lot of wiggle room when it comes time to not only providing the perfect bagging machine for a customer, but also a fair price,” notes Aman.
“ASCO helps us price out Vertobagger 2.0 very well in this competitive market,” he relates.
For APPE, Aman is very pleased with how the Vertobagger 2.0 is being received in the market.
“We designed the Vertobagger to be a robust, but also to quickly produce consistent quality bag formation,” sums up Aman.
“Along with it being priced fairly-well, we found that customers like the fact that we offer a great Canadian product and follow it up with excellent local support.
“We’re a small company right now, but thanks to the reaction we have received from the industry, we will continue to be successful in the future—and we’ll ensure that happens by continuing to innovate and follow our mantra to ‘Manufacture simple, robust and environmentally-friendly bagging systems.”