Growing up as a child, Kebab Factory founder and owner Adnan Khan spent his summers working in his father’s butcher shop, and continued to do so throughout his university career.

A born entrepreneur, Khan saw an opportunity that went beyond the back room of his father’s butcher shop, where they were making kebabs by hand.

“I saw a lot of potential in this business, especially with all of the halal aspects and the ethnic growth in Canada,” Khan says.

Founded in 2012 as a subsidiary of NMK Foods, Kebab Factory is a ready-to-cook, frozen foods brand that manufactures the titular kebabs, tandoori chicken, meatballs and, more recently, burgers.

Most of their products are stocked in independent markets, as well as in stores in the likes of Oceans, Sunny Supermarket, in addition to five Walmart locations. 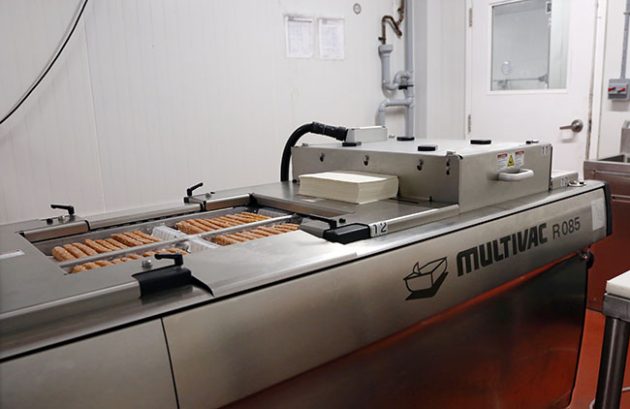 Purchased from Multivac Canada, the Multivac R 085 is an entry-level machine that runs both rigid and flexible films, with its compact design taking up relatively little floorspace.

As a Halal-certified brand, Kebab Factory is in a market that has plenty of room to grow, but as a smaller fish in a big pond, a vital component of their business is making sure that they deviate from the status quo.

“The halal market is definitely growing, but we need to stand out,” Khan told Canadian Packaging during a recent visit to the Mississauga, Ont.-based 7,000-square-foot facility.

“We are a halal brand and we are also an ethnic brand, but we are trying to market our products to the wider population.

“We’re not just trying to market towards the Halal or ethnic demographics. Palates are changing—we want to get our products out there more.”

Packaging has played a significant role in how Kebab Factory separates itself from other brands.

While most conventional frozen food products are enclosed in paperboard packaging, the chicken and beef kebabs are in clear, recyclable vacuum-sealed bags with a pre-printed film.

Khan had noticed that such boxed products would have attractive packaging and the food displayed on the box would look enticing, but the contents in the box would not have the same quality as the packaging conveyed once it was cooked.

“That’s why I wanted people to see the actual product before they bought it,” Khan explains.

“You can see it, there’s no freezer burn, it looks like it’s fresh and you take it straight out of the package and put it on the barbecue or in the oven, cook it from frozen and you won’t notice a difference.”

To improve how they operate, Khan began to search for a machine that would not only guarantee product freshness, but also be able to package the kebabs in a timely manner. 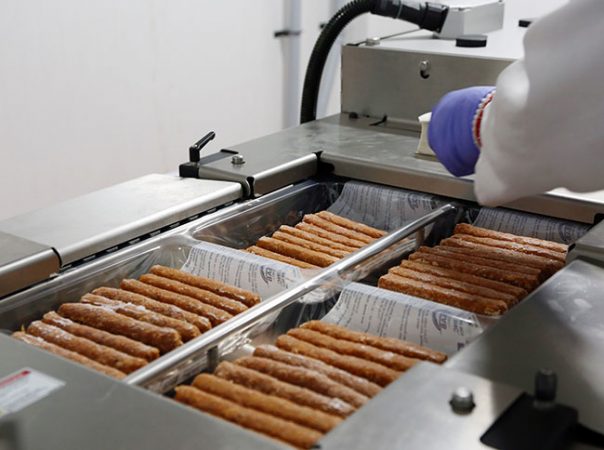 Kebab Factory facility employees pre-loading the flexible film with product before running it through the Multivac R 085.

When he coincidentally stumbled upon the Multivac R 085 thermoforming packaging machine at an OIMP trade show and talked with a sales representative from Multivac Canada, it was a moment that Khan describes as “love at first sight”.

Coming primarily from a financial and marketing background, learning about food processing and acquiring the proper machines had been a learning curve for Khan.

“Once I saw that machine, I knew that purchasing and installing it was the next step for Kebab Factory,” Khan recounts.

Even though it is an entry-level machine, the Multivac R 085 still has the ability to offer an extended configuration level for standard applications.

A compact machine that demands little space, The Multivac R 085 runs both rigid and flexible films up to 350 μm, with maximum forming depths of 88-mm and maximum cut-off lengths without preheating up to 300-mm.

As the R 085 e-concept model, the thermoforming machine operates exclusively with electricity and does not require a compressed air or cooling water connection.

This means that it can be used very accommodatingly in a plethora of different areas within the production process, a major sell for Khan and his team. 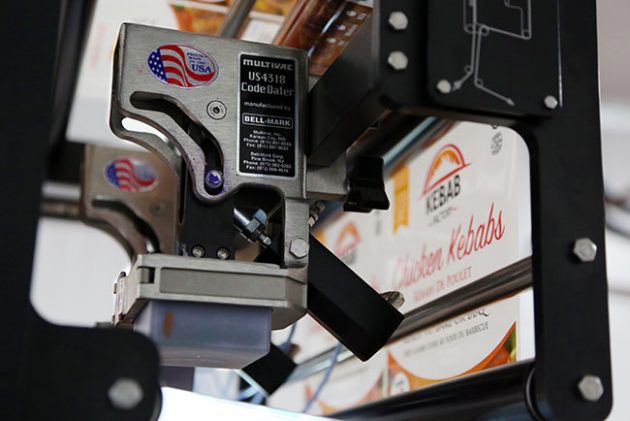 The US4318 date-coder, manufactured by printing and coding specialists BELL-MARK, prints relevant information on the packages, including best-before date and production codes.

Before purchasing, Khan and his team had been using premade pouches from Duropac and had a friend who owned the print shop New Era Print Solutions supply the labels , including nutritional information as well as the UPC code. In some instances, Khan’s mother would help to place the labels on the bags at home during her free time.

Since installing the machine back in August of 2018, the Multivac R 085 has sped up production at almost a three-fold, since it is able to package in pre-printed film and applying labels after vacuum sealing the kebabs was no longer feasible.

“We had at peak times we would have about five people in the production room working about five days,” Khan explains. “This year, it was two people working two days.”

Before the kebabs are packaged on the Multivac R 085, they are put on the Handtmann VF 608 Plus, a state-of-the-art vacuum filler from Handtmann Canada Ltd. Khan had it retrofitted and added a conveyor belt to pump out the kebabs to ensure that they are well proportioned.

The kebabs are taken from the Handtmann VF 608 Plus and are then frozen before being taken to the Multivac R 085.

Workers then put the frozen kebabs into film purchased from Packall, where it goes through the Multivac R 085, where it forms the pouch around the kebabs, and vacuum seals the product. 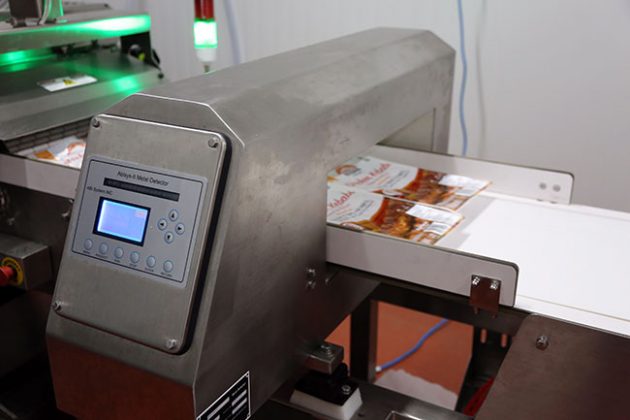 All of the finished products are passed through a high-sensitivity Abisys-II Metal Detector, supplied by ABI System Inc., to check for any possible contaminants that may have inadvertently made their way into the package before it is ready for retail sale.

The machine can also add the compulsory information such as the date, a best before date stamp as well as production stamps.

Once packaged, workers then take the finished product and put them in master cases.

Having been praised for its proficiency and easy-to-use interfaces, the Multivac R 085 produces about 80 boxes of product a day, an upgrade from the approximate 50 boxes Kebab Factory was producing when they were manually packaging the kebabs.

Khan estimates a possibility of producing upwards of 150 boxes of product a day with the addition of two more employees.

Adds Khan: “We’re very happy with the Multivac, and we hope to grow with it.”

Khan is especially happy with the experience that Kebab Factory has had working with Multivac. 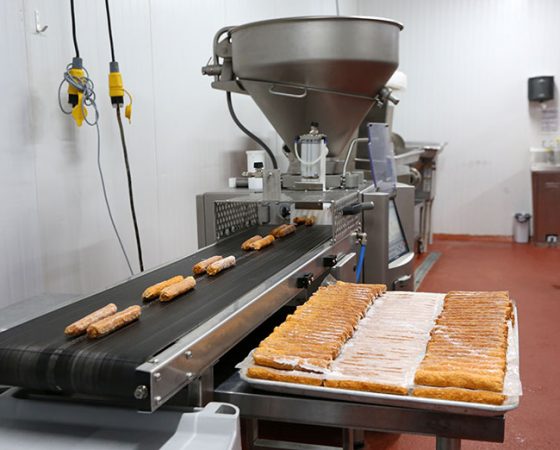 Before being run through the Multivac R 085, the kebabs are first put through the Handtmann VF 608 Plus, a state-of-the-art vacuum filler from Handtmann Canada Ltd.

Going against big name competitors in the likes of Maple Lodge Farms and Maple Leaf Foods, Khan appreciates the fact that Multivac sales representatives prioritize their needs and concerns in a timely, professional, and friendly manner.

Prior to installation, Khan and his team faced a hiccup when the Multivac R 085 was not optimized.

After letting a Multivac sales representative know about the situation, someone was at the facility to repair the machine within a day.

“Since then, we have been running great,” Khan extols.

“A very small percent of packages get returned or are broken, and there have not been any reject packages.”

Khan adds that the sales representative that he has worked throughout the buying and installation process makes frequent calls to see not only check in on the machine, but to also see how Khan and his business are doing. Khan describes him as acting like a second dad in a way.

“The team at Multivac are very diligent and they want to see us happy,” Khan says.

“They want to see us be successful with our product launches and they have worked tirelessly to make that happen.”

With Multivac Canada located in Brampton, Khan appreciates that they are close enough to get to the facility should anything happen with the machine. 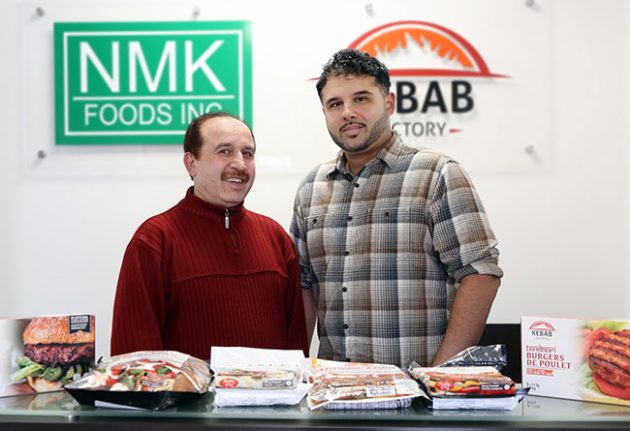 Adnan and his father proudly strike a pose at their Mississauga, Ont.-based headquarters while showing off their freshly packaged kebabs and burgers.

In fact, Khan is so impressed with how well the Multivac R 085 has performed at the facility that he would consider buying machines from Multivac again.

“We’re looking at getting a label applicator and a banding solution, which applies a polymer band around a finished product so it adds a little level of packaging but people can still see the goods.

Machinery aside, the next big focus for Kebab Factory is to work towards attaining their SQF (Safe Quality Food) certification and a federal license designation, which would assist Kebab Factory in getting stocked into bigger retail stores.

With the increase in demand for halal and ethnic foods, the future is looking promising for Khan. 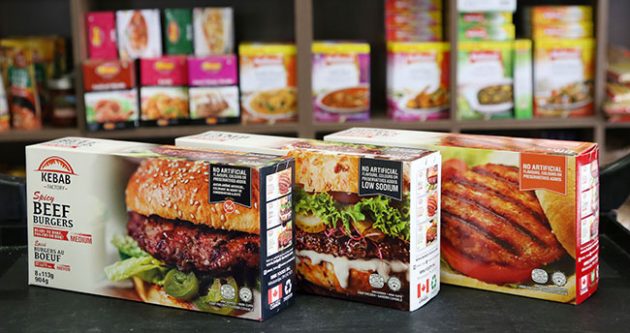 Kebab Factory has recently begun to make and sell different varieties of burgers, which are placed in paperboard folding cartons produced by Beneco Packaging.

“It’s about getting out there, getting more shelf space in stores, differentiating your product in whatever way we can, which we hope that we’re doing with the Multivac and with our packaging,” Khan extols.

“I think Canadian meat and ingredients are definitely superior and people around the world will appreciate it for their families.

“Now since buying power is gearing up around the world, shoppers will be looking for better tasting and healthier food options from different parts of the world and hopefully Canada can be a world leader on this front.”