We Are Family—March 2018, Canadian Packaging

When it comes to farming, no one would dare assume it is a cushy job.
Nowadays, most farmers of vegetable produce are those born and raised in the profession with farms passing down from parent to scion.
With the original family farm started up in the mid-1800s in Sherrington, Que. about 50 kilometers south of Montreal, Les Fermes Leclair et Frères ltée (Leclair Brothers Farm) was started in 1970 by three brothers—André, Ernest and Maurice Leclair.
The family business involves the diversity of being a fresh vegetable grower, harvester and processor, sowing over 700 acres and planting some 450 million seeds annually, employing about 100 people in the field and inside the packaging facility.
“We do 450 acres of radishes 70 acres of Nantes carrots, 50 acres of bunch carrots (literally produce bunched together via a rubber band or other similar fashion), 100 acres of green onion, and 35 acres of beets,” Les Fermes Leclair et Frères vice-president Jocelyn Leclair told Canadian Packaging during a recent interview.
The radishes are the most important revenue stream for the farm, with all of its products except for the shallots/green onions sold via its own Famille Leclair brand.
“The cost is too high to tag bundles of green onions with our label, but the onions can be recognized by our purple bands,” mentions Leclair.
“On top of packaging our own brand of produce, we will also pack for other brands upon demand from brokers looking to export to the Ontario market,” he continues.
In charge of field production and mechanical maintenance, Leclair says that the peak harvest time on the farm is between June and October, “with up to 70 percent of the acreage of radishes and all Nantes carrots harvested by machine, with the remainder bunched by hand.”
Because the farm does not utilize greenhouse growing, Leclair says that after its own veggies are harvested, they deal with farms in Florida for radishes, and specifically with a singular farm in Georgia that provides Nantes carrots just for them.
Leclair says that when his father and two uncles began to farm the family land in earnest as a business after the death of their father in 1970, they started with a relatively small patch, but with quite a few different vegetables.
Over the next decade, the company increased its acreage, and even the number of vegetables it produced.
But with the onset of the 1980s, they decided to concentrate on growing their market share by sowing just two vegetables: cello radishes (radishes packaged in cellophane or plastic packs or pouches) and mini carrots, at the time providing product to retail grocery chains such as Steinberg. 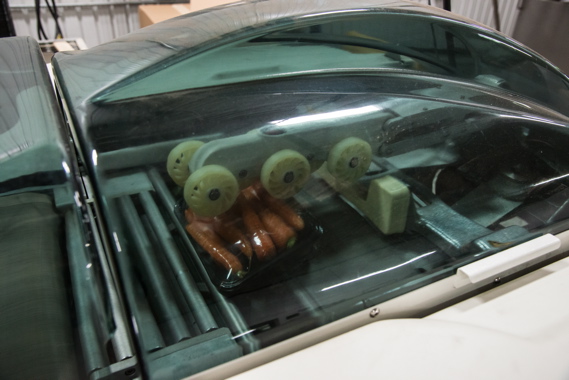 The Fabbri Model 38 applies a stretch film wrap over the produce and tray at a rate of up to 30 units per minute.

“The company bought land in 1990 to increase acreage, and a couple of years later began sowing yellow onions,” says Leclair. “But when my uncles decided to retire in 1995, my sisters and I decided to join the family business with our father Maurice.”
Soon after the family was acutely aware that the market was in the process of changing to one that wanted more bunch vegetables.
Les Fermes Leclair et Frères began to produce bunched carrots and bunched beets and by 2010 they began to introduce Nantes carrots to Loblaws.
“Since that time we have been working to develop the market with different promotions,” he continues. “Its worked quite well by allowing us to increase our volumes, which is also why we have to ensure we keep reinvesting our energies and capital back into the company to have the best production line equipment available for our workers.” 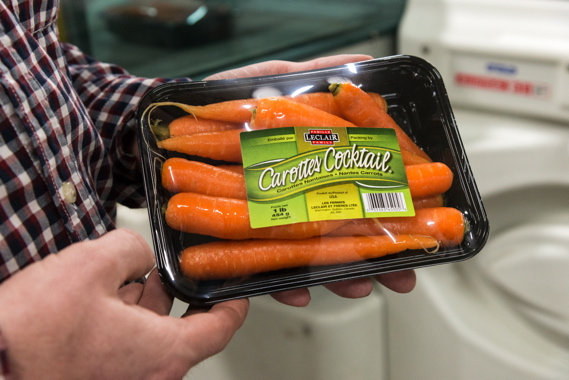 Since upgrading its packaging process, Leclair Brothers Farm has increased the shelf-life and shelf-presence of its Nantes carrots Cocktail brand, thanks to the Fabbri Model 38 stretch film wrapper machine from Reiser.

Although one of the sisters left the company, it is still run by: Jocelyn Leclair; his  sister Diane who is in charge of sales, the workers on the production line and financing: as well as their father and president Maurice, whom Leclair describes as being in charge of maintenance on the packaging line and development or modification of the process line.
At Les Fermes Leclair et Frères, Leclair says the production line process is a relatively simple affair.
“For bunching of vegetables, we have three different types of washing machines.
“We place the radishes into a hopper, add a mix of air and water for a prewash,” he continues. “After that our workers place the bunched radishes onto a conveyor taking it to a washing machine for further cleaning before it is packed in corrugated boxes. We then store them in a vacuum cooler to better provide a longer shelf life.”
Workers place bunches of green onions onto a conveyor where a machine cuts and washes the product with water jets—the carrots and beets use the same line.
Green onions, carrots and beets are packed into corrugated cartons and have ice added in for preservation.
For cello radishes and Nantes carrots, after harvesting by machine, its leaves are removed in the field. 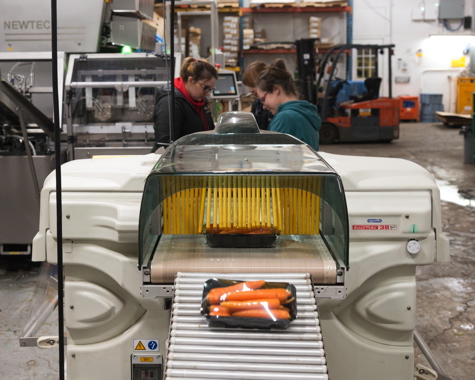 After workers manually place the carrots into a Styrofoam tray, the Fabbri Model 38 tray wrapper from Reiser applies a clear film sealing it on its underside at the Leclair Brothers Farm’s state-of-the-art facility in Sherrington, Que.

“Inside our facility, we wash and grade the carrots and radishes by diameter and pack in different packaging according to need,” explains Leclair.
He says that for the radishes, they have four older Triangle Package Machinery vertical form-fill-seal baggers consisting of models L55PK and L6PK and two zip applicators from REC-PRO to pack produce in one-pound zip lock.
For the Nantes carrots, the company recently finished an upgrade to the line.
“When we began in Nantes carrots we found a used machinery to wrap, and last year we decided to increase our production per hour,” mentions Leclair. “We bought a new nine-head scale Newtec 4009B1 model weigher with a tray filler and Fabbri wrap machine. With this investment we figure we will double our productivity.”
In 2010, Les Fermes Leclair et Frères purchased three used Italian-made Fabbri Group wrapping machines from a supermarket.
“Later when we decided to invest in a new wrapper machine, we were already quite aware of the quality and the reliability of the brand, and it’s why it was quite an easy decision to re-up with a new Fabbri in 2017,” Leclair extols. 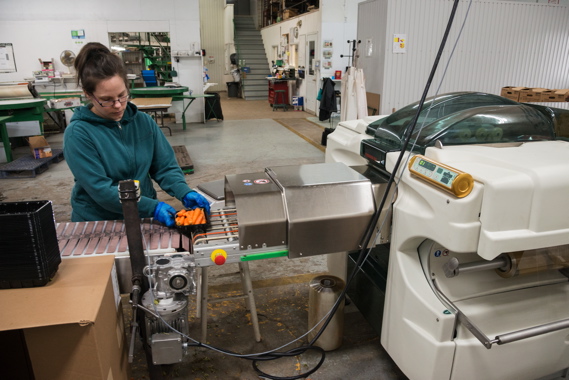 After placing the Nantes carrots onto a tray, a Leclair Brothers Farm employee watches as the unit enters the Fabbri Model 38 stretch film wrapping system from Reiser to apply a clear plastic wrap providing a good shelf-life extension and a great look for retail.

Nowadays, the Fabbri brand is distributed and serviced by Reiser, that has since 1959 been a leading supplier of processing, portioning and packaging equipment and solutions to the food industry. A U.S.-headquartered company with a division in the U.K, it operates Reiser Canada from Burlington, Ont.
The new Fabbri Model 38 is a compact and versatile automatic machine that, along with creating an excellent stretchfilm wrapping pack, Reiser says each part of the machine has been designed to be in compliance with the most stringent regulations on operator safety, even possessing a rounded safety guard that eliminates accidental impact during operator movement.
“Before our line upgrade, we were running between 12 to 15 cycles per minute,” says Leclair. “But with the Newtec weighing machine and the new Fabbri Model 38 that we use just for Nantes carrots, we can run up to 30 cycles per minute.”
The company uses the Model 38 to stretchfilm wrap the Nantes carrots on plastic or Styrofoam trays.
The Fabbri Model 38 is an overwrap machine that wraps plastic film over a product placed atop a tray.
“It’s really quite simple to use,” Leclair explains. “You can configure a large sized tray with different stretching and then fill the machine with the tray you want to wrap.
“Should there ever be a jam, there are safety switches that are triggered when you open a door, plus an emergency stop that will allow our workers to safely unblock it.”
The robust Model 38 is made of stainless steel, aluminum and plastic, and is considered by Reiser to be particularly suitable for medium-sized packing centers, supermarkets and hypermarkets.
The machine is also configurable in five different ways, allowing it to respond to the diverse needs of the packing company.
“One of the impressive features of this Model 38 is that it always has two reels in motion allowing for complete automatic wrapping, but it also means that if there is a need to replace the film, production doesn’t need to stop, though that depends on the tray, too,” Leclair muses.
Reiser notes that the operator has the option of running the Model 38 at two differing speeds choosing that presents them with the ability to produce the best packaging possible owing to different products having differing centers of gravity.
Also because the packages are sealed on the tray’s underside, the sealing belt has been designed to optimize sealability without the possibility of overheating and weakening the tray itself.
Leclair says that approximately 70 percent of all the produce packed at their facility is for product under their own brand, Cocktail, which was first introduced by Les Fermes Leclair et Frères at the end of the 1970s when the farm began to pack produce in film, utilizing it then for radishes and mini carrots.
The brand was shelved in 2006 when they stopped producing mini carrots, ushering in the Famille Leclair brand, but reintroduced it when they began to produce and pack the Nantes carrots a few years later.
Les Fermes Leclair et Frères maintains a rigorous farm safety and traceability program, says Leclair, noting that it is a member of the Prisme Consortium that is involved in crop screening and monitoring in an effort to reduce pesticide use and to examine its impact on the environment.

Carrots—and all the Leclair produce—is packed for delivery in corrugated cartons supplied by Cascades that proudly display that Lecalir is a member of the Prisme Consortium, a group involved in crop screening, as well as the monitoring and reduction of pesticide use.

“We are also involved in a few research projects examining pesticide reduction and fertilization, and are testing new cultivars and new growing techniques,” Leclair mentions, explaining that a cultivar is a plant variety produced by selective breeding.
The farm is one of the first in Canada to use sterile flies on its green onion growing area. Releasing the fly is meant to minimize the use of insecticide to control the destructive onion maggot.
“Les Fermes Leclair et Frères has achieved a satisfying level of success, but of course with success comes the pride in having it continue and grow,” says Leclair.
“We have achieved store-level success with the Nantes carrots packed by the Fabbri Model 38 from Reiser,” he continues.
“Not only does the vegetable look good in the packaging, but the shelf-life it achieves is decent, too.
“Surrounding ourselves with excellent automation with even better employees is key to our continued growth,” sums up Leclair.
“It has allowed us to be recognized within the industry and by the consumer for the quality of our products, which is something we hope we can take forward as we continue to successfully grow.”