No one knows better than Hayter’s Farm that a true Thanksgiving dinner is incomplete without a perfectly cooked stuffed turkey at the center of the table.

For over 70 years, the Dashwood, Ont.-based family- owned turkey farm has been dedicated to sustainably growing their business by adopting innovative farming practices so that the end result is a great tasting turkey.

Much of Hayter’s Farm’s retail products are carried throughout the province by established grocery chains such as Farm Boy, Fortinos, Sobey’s, Foodlands, Zehrs, Valumart, and Y.I.Gs.

Additionally, Hayter’s Farms does private-label for Longo’s, and HelloFresh/Chef’s Plate. 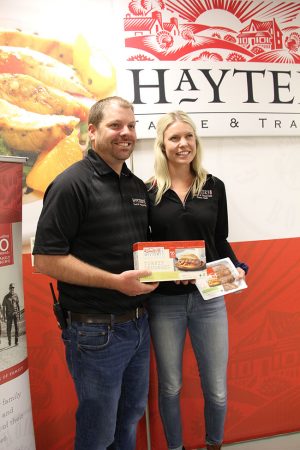 “After 70 years of doing this, we haven’t gotten here overnight––it’s been a long time coming,” says Sean Maguire, who is not only the sales & operations manager, but also the grandson of the Hayter’s Farm founder, Harry Hayter.

“It’s been a slow and conservative growth, working with these partnerships that we’ve made over the years and we continue to grow with them.

“The family aspect to all of our decision-making to working with our staff and team, and keeping this family culture moving is our greatest success.”

Employing about 85 full-time staff over a one-shift, five-days-a-week schedule, the 45,000-square-foot facility is certified to meet all of the germane HACCP (Hazard Analysis Critical Control Points) compliance requirements as mandated by the CFIA (Canadian Food Inspection Agency) and the plant’s internationally recognized BRC (British Retail Consortium) and Halal certifications for food safety.

Hayter’s Farm also received their GAP (Global Animal Protection) certification from the farm level right through the plant, which was a yearlong process.

Additionally, all meat products are free of added hormones and steroids.

“At the end of the day, you’re providing a product that consumers are going to feed to their children, or feed to their families,” Maguire told Canadian Packaging during a recent visit.

“Consumers want that security and food safety is always top of mind.” 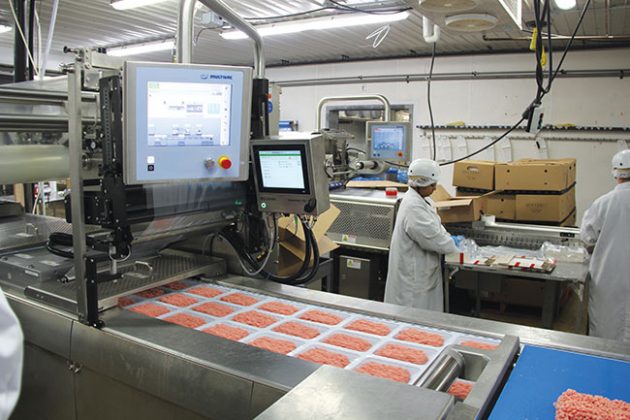 Purchased from Multivac Canada, Inc., the R245 Thermoformer Packaging machine has proven to be a speedy machine for Hayter’s Farm, as it has the capability to run up to 64 trays of turkey products a minute.

While Hayter’s Farm feels they do not compete amongst other turkey processors, there is competition against other proteins, as turkey is a naturally leaner and healthier protein option.

“Turkey is another alternative to mainstream beef––we see ourselves fitting in that alternative section,” Maguire shares.

“Our competition is the other proteins, we’re up against chicken, beef, pork, and so those are some tough proteins to crack into those markets.

“At the end of the day, we just want to have more consumers eat turkey on a more regular basis,”

Adds Maguire: “Those are our challenges and barriers, our everyday fight.”

To date, Hayter’s Farm is the only Federally inspected turkey farm in Canada that raises birds and processes poultry products on-site.

Hayter’s Farm is able to ensure the best practices for their turkeys, environment, and customers through managing every step of the process.

With the busy Thanksgiving and Christmas season around the corner, Maguire and his team are counting on the plant’s equipment to meet those demands during their peak seasons.

When faced with needing to update their production line, Maguire shares that it was an almost two-year process.

“When you’re dealing with the future and not knowing where you’re going, it’s always hard to nail that down quickly,” Maguire explains.

“It took a long time to come up with exactly what would fit our needs.” 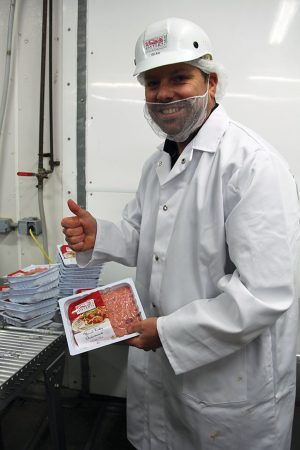 When it came to purchasing, Maguire and his team did not have to look much further than Multivac Canada Inc., who has been a partner of Hayter’s Farm for over 15 years.

Citing their experiences of being one of the first companies in Canada to purchase their T 700 Automatic Tray sealer, Maguire wanted a machine that was just as reliable and flexible.

“Multivac gave us all the options and they offered to take us to other clients and show us their equipment,” Maguire reflects.

“At the end of the day it was our decision on what would be good for Hayter’s, so they let us make that decision ourselves.”

Through Multivac’s guidance and expertise, Hayter’s Farm installed a state-of-the-art R 245 Thermoformer Packaging machine back in March of 2019.

“It’s a piece of very reliable equipment,” Maguire says. “When there’s new technology, there’s always learning curves but once you jump in there, it’s very reliable.

“This new R 245 is a new technology change where we go from a pre-formed tray to now we’re forming the tray in-line.”

Praised for its versatility, Maguire was drawn to the R 245 Thermoformer for its flexibility and efficiency. 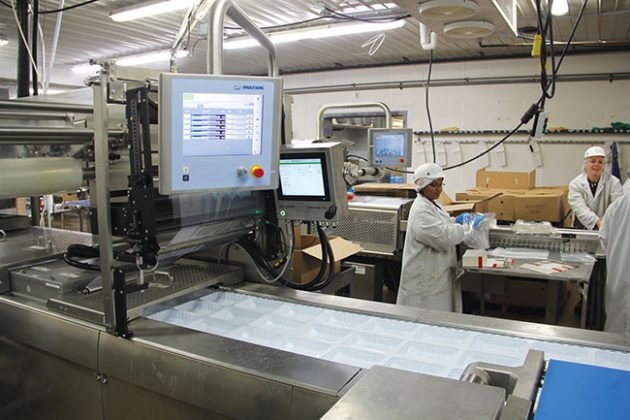 Hayter’s Farms relies heavily on the speed of the R 245 Thermoformer to produce as many packaged turkey products as they can.

“We can form trays inline, so if we want a different shape, colour or thickness of tray, we can adjust on the fly very easily,” Maguire shares.

“With consumers becoming more savvy as time goes on, they’re more demanding on processors like ourselves to keep up with technology and the keep up with packaging, and we found the R 245 to be the best suited for the next 10-15 years.

Adds Maguire: “it gives us room to grow, and it gives us that flexibility that we need.”

Multivac also supplies the film, the machine and a comprehensive preventative maintenance agreement, with these items the warranty on the machine has double to two years, which shows the confidence Multivac has in the equipment.

Harvesting the turkeys two days a week, Hayter’s takes the fresh meat and then go through a grinding, mixing and blending process with the spices before it is sent to the different devices.

The turkey is then moved along a GEA Flex Loader to the R 245 Thermoformer, where operators are also able to form a tray inline from film also supplied by Multivac, which helps to minimize their carbon footprint.

Hayter’s Farm predominantly uses the MAP (Modified Atmosphere Packaging) tray or a vacuum-sealed tray for their turkey products, due to consumer preference. 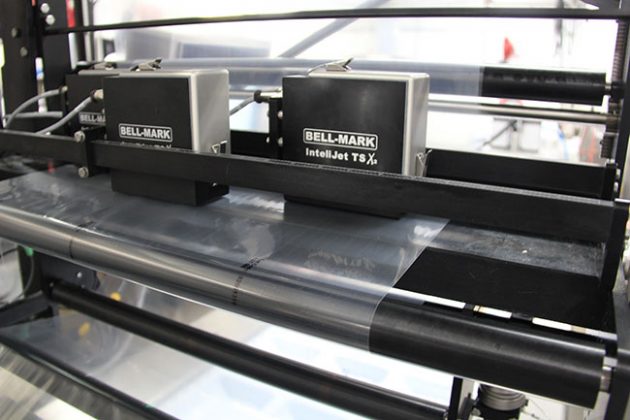 Facility workers then take the finished product and put them in corrugated boxes from Atlantic Packaging before it is sent for retail sale.

All fresh products are held in the 20,000-square-foot cold storage facility between -2 to 2 degrees C for up to 5 days. If it is a frozen item, it is kept below -18 degrees C.

Maguire has also seen plenty of potential in their partnership with Multivac, with Maguire extolling that they have gone above and beyond to ensure that Hayter’s Farm had a positive experience purchasing with them.

“They’re there to help and to work things through with you and are happy to pull in other vendors that they know who can help with the jobs,” Maguire recounts.

“At the end of the day, Multivac makes sure that you’re getting a product that you really need.”

While Hayter’s Farm Dashwood location may seem far away to some, the Brampton, Ont.-based Multivac have always made the drive out in the event of a machine breakdown.

“With all equipment, there’s always challenges that you come across and the Multivac team have been good about coming out and helping,” Maguire says.

“It’s about a two and a half hour drive, but they’re here fairly quickly.” 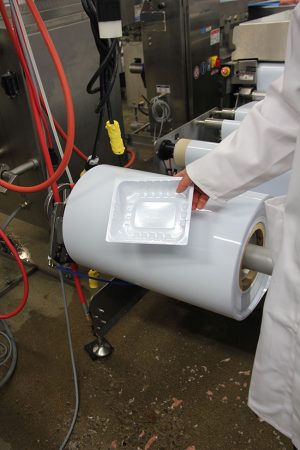 One of the benefits of having the R 245 Thermoformer is that it allows operators to form trays inline from film that was also supplied by Multivac, which has helped Hayter’s Farms to minimize their overall carbon footprint.

While Maguire is confident that Hayter’s Farm is as advanced as it should be when it comes to their technology, he says that he would purchase from Multivac again in the future to increase capacity by doubling lines or adding more of the same technology.

“I would be very confident to put another Multivac in and running it side by side or buying another machine that could complement it,” Maguire says confidently. “I have no reservations that way.”

While they may not be buying any new equipment from Multivac anytime soon, Maguire deduces that Hayter’s Farm will continue to provide high-quality turkey products for their customers, which he credits to the dedicated workers.

“We call them our extended family––they’re a huge part of why we’re doing this,” Maguire says.

“We’re nimble, we’re flexible and that’s partially because of the team we have––they feel the urgency, the need to keep this going and they’re flexible with us.

Concludes Maguire: “We always say that we care, and it’s our level of care, integrity, and commitment we have for our customers that makes us stand out.”