Sweet Dreams Are Made Of This — January/February 2018, Canadian Packaging

Synonymous with Canada, maple syrup has been collected and used since pre-European days by the indigenous peoples of North America.
After Europeans in Canada learned of the practice and refined its methods, Canada has become the world’s largest supplier of maple syrup, exporting some $487 million worth in 2016.
The concept of maple syrup was first “discovered” by Europeans in 1534 when Jacques Cartier on his first voyage to Canada heard about a tasty, delicate sugar that flowed from the trees when tapped with an axe by the indigenous peoples.
Maple syrup is derived from sugar maple and red maple trees that typically take the starch stored within it during the growing season and convert it to sugar.
The sugar combines with water taken in by the tree’s roots, and in the Spring—between late February through early May—when temperatures start to go up, the sweet sap within the trunk and roots of the tree begins to expand. The freezing at night and thawing during the day causes the sap to run, which is then harvested.
While harvesting was done as the aboriginals had done it through the mid-19th century with axe tapping, advancements such as wood and steel spouts, and buckets were introduced.
Nowadays, tubing and reverse osmosis play key roles, as the tubes connect to collector pipes that carry the sap by gravity or pumping to a sugar shack where it is collected in large stainless steel tubs, and sent to an osmosis system before boiling turns it into maple syrup.
The province of Quebec is by far the largest producer of maple syrup in Canada, with some 13,700 companies that are able to process about 110 million pounds of the gooey stuff on average.
While it considers itself to be a small company, Les Productions Agricoles Beaudry Ltee. of St-Patrice-de-Beaurivage, Quebec, is a family-owned business that makes its living creating the Beaudry brand of maple products, selling maple syrup, but mostly producing a host of other sweet delights from the main ingredient. 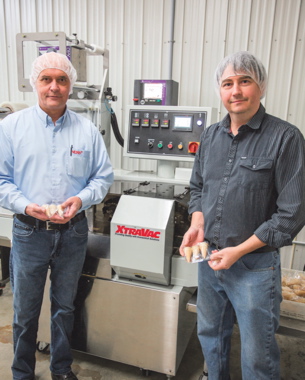 Founded in 1984, but currently owned by Roger and Denise Beaudry, the reins of the business will be passed down to son Christian and wife Edith Mercier later this year, but will still continue its fine tradition of producing and packaging maple syrup, maple butter, maple tay, granulated maple sugar, maple fudge, maple cone, maple cotton candy and more, including moving into maple butter chocolate and maple popcorn. 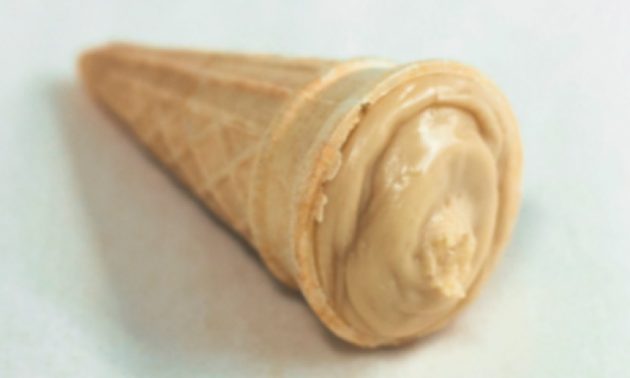 “As you might suspect, everything we produce revolves around maple syrup products,” company director Christian Beaudry told Canadian Packaging magazine during a recent interview.
“The company began processing just maple syrup around 1984,” begins Beaudry noting that at that time bulk maple syrup did not have much value.
“In order to get a better price for the syrup, the current owners decided to transform the company to one that manufactured different products that could be sold directly to customers in various public markets in Quebec City.
“Over the years,” continues Beaudry,“the company has evolved to where we now have seven employees in a 9,000-square-foot processing plant where we produce a wide range of maple-based products for numerous tourist shops as well as for 200-plus convenience stores throughout the province of Quebec.” 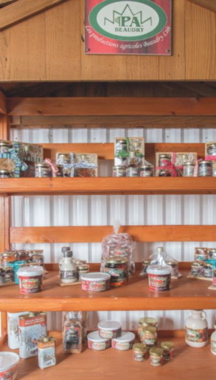 Les Productions Agricoles Beaudry purchases maple syrup from the Fédération des producteurs acéricoles du Québec, an organization that represents Québec maple syrup producers who produce 72 percent of the world’s supply.
“Every year, we have to obtain the right to be an authorized buyer of maple syrup from the Federation,” relates Beaudry, adding that for quality control purposes each purchased barrel is inspected by an independent quality control company.
He says that their Beaudry brand (Produits d’érable Beaudry) maple syrup products “are of a high quality, but that the company’s main strength over its competitors is our ability to produce a wide range of maple products that they can sell to their customers.
“It enables us to become more of a one-stop-shop for our customers, who no longer need to deal with multiple suppliers,” Beaudry reveals. 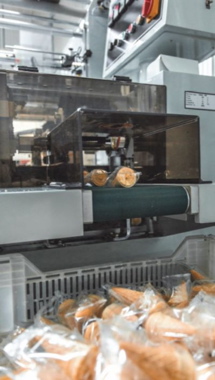 At Les Productions Agricoles Beaudry, after the initial quality control is completed, the maple syrup is heated or boiled at different temperatures to be either bottled—heated and filtered—or processed—boiled and filtered into different products.
After the batch of boiled syrup is cooled, the gooey remnants are brewed to obtain different consistencies, which gives them maple butter, maple taffy, soft maple sugar and more.
“For maple fudge, maple cotton candy and other products,” explains Beaudry,“we have recipes that we make with granulated maple sugar.”
He says that the company’s production line isn’t really automated because its high-quality products are mostly hand-made.
For packaging purposes, however, Les Productions Agricoles Beaudry sought out an automated flowwrapper machine from VC999 Canada Ltd. / Xtravac to increase the packaging speeds of its fudge and maple sugar cone products, as well as looking ahead to eventually use it on other products. 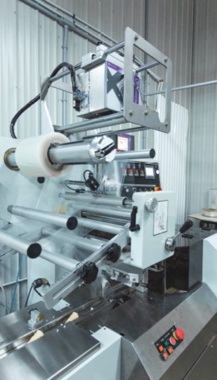 Les Productions Agricoles Beaudry’s XtraVac B Series flowwrapper from VC999 is run by one worker packing its maple products at speeds up to 50 units a minute.

VC999 Canada is a part of VC999 Americas that is headquartered in Kansas, MO., a global-leader in the design and manufacture of vacuum chamber machines, horizontal thermoformers (rollstock), tray sealers and skin packaging, as well as packaging materials and supplies.
As well, via its sister brands XtraVac packaging machines and XtraPlast packaging materials, it offers vertical and horizontal flowwrapping machine systems, packaging robotics, vision inspection systems, conveyor and converger systems, weighing, labeling and product scanning.
VC999 maintains a manufacturing facility in Kansas City and sales and service forces throughout the Americas, including Canada, Mexico and Columbia.
The Kansas City facility designs and manufactures the P- and i-Series thermoformer machines and manages the XtraVac and XtraPlast brands.
Beaudry says his company purchased and installed an XtraVac B Series flowwrapper in January of 2017, and immediately saw a huge increase in packaging line speeds.
“We typically run the XtraVac flowwrapper at a speed of 40 units per minute, but it can wrap as fast as 250 units a minute,” says Beaudry. “One person can pack 35 to 50 products per minute manually supplying the flowwrapper.
“It is very easy to use—even the loading of the plastic film wrap itself only takes between three to five minutes.”
Features of the XtraVac B Series flowwrapper include: 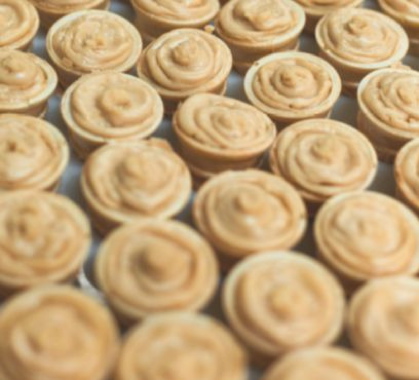 Cone holding trays keep the Beaudry maple butter-filled cone products upright until they are manually-loaded into the Xtra-Vac B Series flowwrapper from VC999.

Beaudry says that after making the decision to better automate the packing of products, and after looking at models from other manufacturers, they visited the PackEx Montreal trade show and talked with VC999 representatives there.
“They were still packing by hand, and wanted equipment that would speed up the process while maintaining the high-quality look of the product to match its high-quality taste,” reveals VC999 director of sales at the St-Germain-De-Grantham, Quebec office Daniel Gardner.
Gardner notes that VC999 does have its hands in the candy business with other customers, but that wasn’t a factor in Les Productions Agricoles Beaudry choosing its machine.
“Our XtraVac B Series flowwrapper is a very quick and accurate machine and is very robust,” says Gardner.
“But just knowing that we could service them in French and English and are only two hours away helped put their mind at ease. Plus, we do not contract out our services.We service all VC999 / Xtravac machines ourselves.”
Beaudry agrees,“While VC999’s proximity to us is such that downtime won’t be a factor, we also chose them because we talked to other customers of theirs who thought their service was fantastic.
“After the machine was purchased, they continued to talk to us and make sure the XtraVac B Series flowwrapper was working to our expectations,” Beaudry notes.
While one might think that simply adding a flowwrapper to the packaging line was a cut-and-dry solution, both Gardner and Beaudry reveal that there was one issue, and it was taken care of before the machine was installed on site.
The issue revolved around the fact that the maple syrup products were sticky, but Gardner says it was resolved quickly simply by choosing the right belt.
The clear plastic film used to pack the fudge and maple sugar cone products is supplied by VC999’s XtraPlast division. 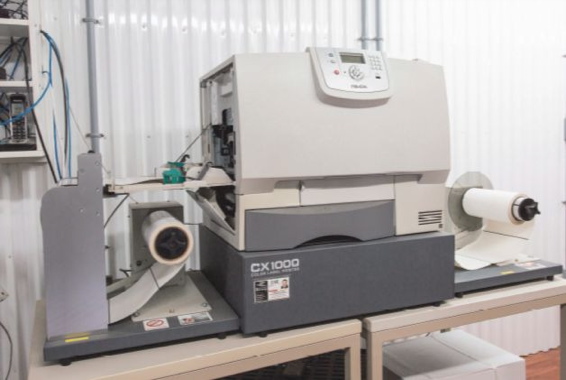 While there is nothing overly special about the type of film used, Gardner says the Les Productions Agricoles Beaudry products required film with a high OTR (oxygen transmission rate) where the oxygen gas permeates through the film relative to specific temperature and humidity within the pack to ensure a long shelf-life.
Additional equipment used by Les Productions Agricoles Beaudry include a Markem-Imaje X40 coder system and a high-quality Primera color label printer featuring a 2,400-dpi (dots per inch) resolution and a high-speed print operation.
The X40 thermal transfer coder provides an advanced coding solution that provides long-term cost control, a green design, greater uptime and great performance.
Capable of print speeds up to 600 mm/second, the X40 uses an intelligent printhead with automatic set-up and dead-dot detection for optimum print quality of 300-dpi resolution. 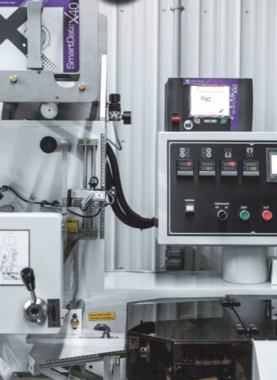 Situated inline with the XtraVac B Series flowwrapper, a Smart-Date 40 thermal transfer coding system from Markem-Imaje provides 300-dpi of high-quality resolution that accentuates the high-quality of Beaudry’s products.

“We are very happy with the packing success we have achieved with the VC999 XtraVac B Series flowwrapper,” sums up Beaudry.
“Not only has it made our job easier to pack and get the product out to the customer quicker, we have also increased our product’s shelf-life.
“And through it all, we couldn’t be happier with VC999,” he continues.
“We were optimistic when we purchased the system, yet the service we have received from VC999 is exactly what we had hoped we would receive. We are very satisfied with VC999.”