Photo caption: Holding onto the very well-received Vivo … bien élevés brand of veal bacon produced and packaged on behalf of Ecolait, Edelweiss Foods general manager Bohdan Lozynsky says he is impressed but not surprised at the positive consumer response to his Halal-certified meats.

Citing an eastern European heritage, a Canadian meats processor takes old-world products and brings them into the 21st century making them available to a wider swath of consumers across the globe thanks to a daring change in ingredient philosophy.
Known as Les Ailments Edelweiss Foods, until 2012 the privately-owned Laval, Que. company was known as a processor of European-style of pork products such as bacon, ham and sausages, but realized the way the company was set-up, expanding its customer base was going to be difficult, owing to the main fact that the meats processing industry is highly competitive and dominated by a few companies across Canada.
Realizing it couldn’t immediately compete with the deep pockets of the competition, Edelweiss owner and general manager Bohdan Lozynsky realized that simply having high-quality meat products was a great start but hardly enough to allow the growth he wanted. 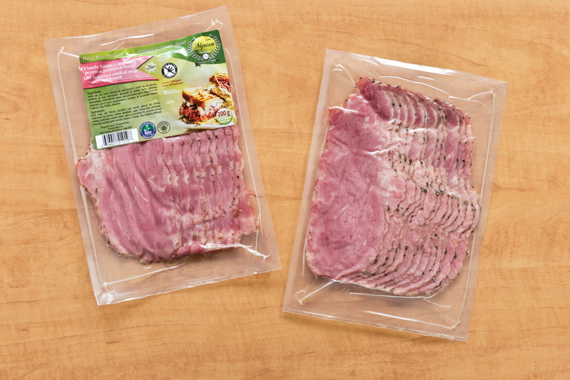 “When I purchased Edelweiss Foods in 2012, it was already a well-established business—two in fact,” Lozynsky told Canadian Packaging during a recent interview.
Edelweiss itself was founded in 1982 after the merger of two Montreal-based companies that had individually established a well-respected reputation for their European-style deli-meat products since 1938.
“Great products, respect and reputation are all very important to us at Edelweiss, but you can only chew on respect and reputation for so long until you need to stand up and forge your own reputation,” explains Lozynsky.
At the time of the Edelweiss purchase in 2012, Lozynsky notes that it was processing lots and lots and lots of pork, even offering three types of ham.
But despite inheriting an established sales base, Lozynsky was correct in his observations that the Canadian pork industry was rife with competition, and that he needed to try and establish a separate identity for the company in order to take that next step forward. 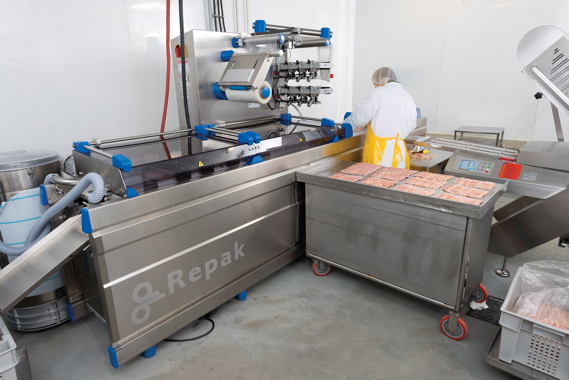 An Edelweiss employee placing pre-weighed portions of veal bacon by hand into a bottom pocket of film on the Reiser Repak RE15 form/fill/seal thermoforming machine.

His answer was, in 2012, to begin creating products Halal-certified products of meats people wanted to eat but were restricted from indulging in because of religious doctrine.
“As anyone in the meats processing business can tell you, there is a lot of competition in the pork segment, and while I’m not afraid of a challenge, I’d prefer a challenge where there was a good chance I could come out as a market leader,” enthuses Lozynsky.
“We currently have 23 products we created that have been approved under the strict guidelines of the ISNA Canada for the Halal Certification Agency,” states Lozynsky adding that the company has indeed reinvented itself.
“We were known for our quality Eastern European-style products, but now we are now perhaps better known for our quality and unique Halal-style Eastern European meat products.”
Despite popular opinion, the term ‘halal’ isn’t just a food issue—it’s the Arabic word for ‘permission’ and relates to any object or action permissible for a Muslim to utilize according to Islamic law.
One of those key permissions is the inability to eat bacon, as the Islamic religion forbids to consumption or pork products.
“That’s why we began to offer a real meat alternative—a tasty veal bacon, that we process and package on behalf of our customers,” notes Lozynsky.
According to Lozynsky, Edelweiss Foods does not create foods to sell under its own brand, rather it is a processor and packager of products for a wide range of customers who ship and sell various meats products throughout Canada, the U.S. and the Middle East. 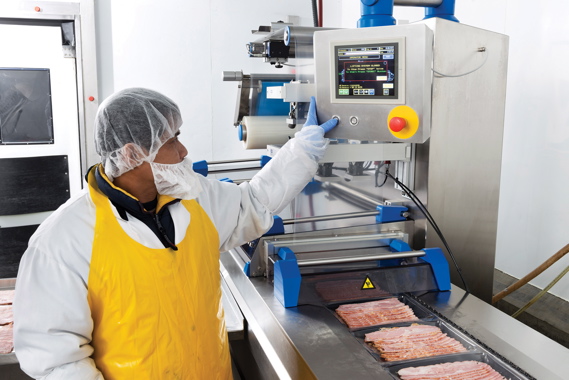 A machine operator changes settings on the user-friendly HMI (human-machine interface) control panel used to program and operate the Repak RE15 thermoformer.

Edelweiss Foods is situated within a 15,000-square-foot processing plant operated by a total of five skilled employees—a small operation, perhaps, but thanks to what Lozynsky says is an incredibly positive reaction to his veal bacon, he might soon have to start thinking about increasing the size and scope of the business.
Lozynsky says that about 85 per cent of Edelweiss Foods’ private label production is on behalf of Écolait Ltd, the largest milk and grain-fed veal production and processing company in the province of Quebec, with the two companies entering into a complex ownership-partnership deal at the end February 2015.
Based in St-Hyacinthe, Écolait had in September of 2014 entered into a 10-year collective agreement with the Atlantic Veterinary College at the University of Prince Edward Island to evolve its animal welfare practices into a global standard, establishing the Vivo … bien élevés brand.
As of late February, Écolait and Edelweiss have entered into a partnership to produce other exciting new Halal-certified meat brands.
The first product offered under the brand is the Vivo bacon made from veal, that Lozynsky proudly states will ring true with all bacon lovers.
“Edelweiss processes the meats—our customers provide the meats they want us to process—using traditional methods where we smoke the meat, place it in a warehouse to cool, slice and then package it,” relates Lozynsky. 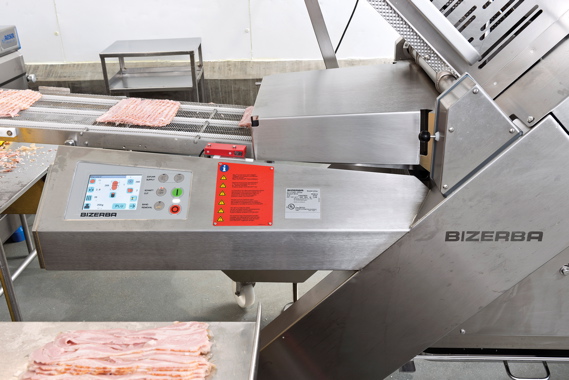 The Vivo veal bacon product contains just five percent fat per portion and over eight grams of protein.
“Along with it being gluten-free, low-fat and containing the lowest amount of sodium possible, the veal bacon actually possesses an average shelf-life from 55 to 60 days,” Lozynsky notes. “It’s a healthy and tasty alternative to regular bacon.”
According to a press release from the time of the Vivo debut, Écolait president and chief executive officer Mario Maillet states: “We used all the required resources to help this value-added, milk-fed veal product meet the standards we set in terms of quality, health and great taste.” 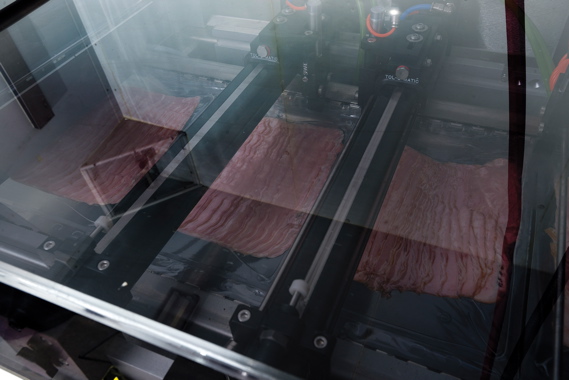 A close-up view of veal bacon slices entering the Reiser Repak RE15 thermoformer for final sealing. 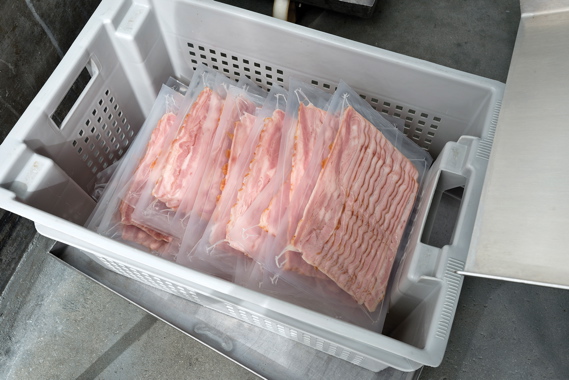 Initially available only at METRO and IGA supermarkets in Quebec, the popularity of the tasty, high-end veal bacon—it doesn’t have that catchy name yet—vacon?—has gone through the barn roof, and Edelweiss now has shipping requests from all over North America and the Middle East.
Without any sales in the bank at the time, Maillet was extremely positive about the veal bacon product: “This wonderful and tasty endeavor is just the beginning, and other equally innovative veal products will soon be available.”
Maillet obviously knew what he was talking about, because Lozynsky wasn’t about to sit on his laurels, and has continued to expand and change menu, but notes, however, that the key is that they are all Halal-certified. 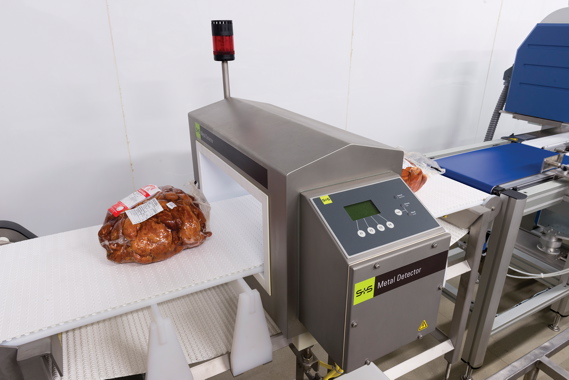 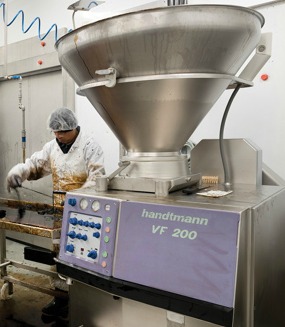 The Edelweiss facility employs a Handtmann VF 200 vacuum filler for the filling, portioning and linking many types and recipes of sausages. 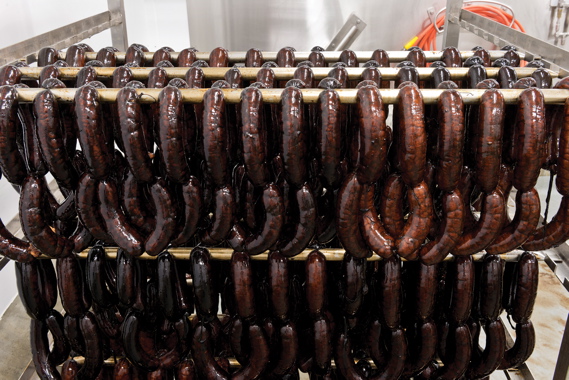 Regardless of what is being processed, all Edelweiss customers provide the meat.
While some customers ask that we follow their own recipes, 85 per cent of them utilize a recipe we created specifically for them,” explains Lozynsky, adding that customers also submit all packs and labels for Edelweiss to incorporate into the packaging process.
One of the key pieces of equipment utilized by Edelweiss is the Reiser Repak RE15 it purchased in May 2014.
Reiser is known within the food processing industry as a specialist in the manufacture of form/fill and seal machinery, as well as new forming technologies, offering deep-draw machinery that provides the user with efficient packaging options while contributing savings in film consumption and quality of service and maintenance.
While all the Repak features are important, Lozynsky says it provides exactly what he needs right now while offering future growth for his company.
“We chose the Repak RE15 because while it gives us exactly what we need for our present needs, it also gives us the flexibility to increase our production rates as future demand requires,” explains Lozynsky.
“On the Repak RE15, the quality of the seal it provides has contributed to a longer shelf-life of our products,” he adds, noting that he also admires the speed it lends the entire production line.
The Repak RE15 is constructed of stainless steel and has been designed to provide excellent food safety even during the mundane but very necessary operation of cleaning. Designed with rounded edges, the Repak thermoformers are designed and manufactured with angled edges to avoid the accumulation of water, cleaners or particulates, allowing for a complete washdown.
Other excellent features of the Reiser Repak RE15, include: 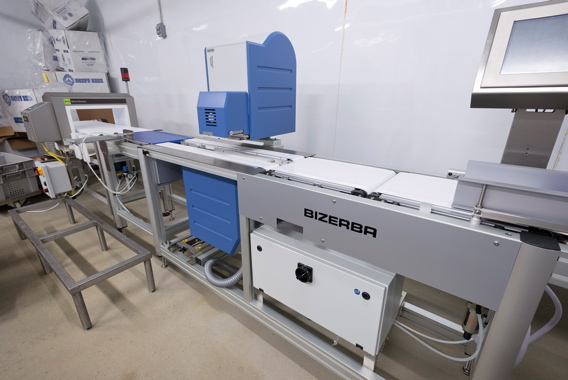 After product is packaged, it moves to a Bizerba Master weigher and top and bottom labeler before exiting through a Sesotec metal detection unit (left).

“Our veal bacon product is considered a higher-end product, and customers like Écolait need the packaging and packing we provide to be of a very high quality,” notes Lozynsky. “We get that from the Reiser Repak RE15.”
The Reiser Repak horizontal form/fill and seal packaging machines are multi-talented, able to produce vacuum and modified-atmosphere packages (MAP) from flexible and semi-rigid materials, as well as Vacuum Skin Packages (VSP), and packages with formed top webs.
The Repak machines use the rapid air forming method to maximize the distribution of film into the critical areas of a package, such as corners. This allows the operator the option of thinner and less expensive forming films while also achieving higher cycle times through the use of shorter vacuum and ventilation times.
Standard on all Repak models, is its 4-Point lifting system on the forming and sealing dies, that allows it to have extremely powerful film sealing pressures. The so-called ‘kinetic central close system’ has the die-set balanced centrally where the optimal distribution of force can be realized. 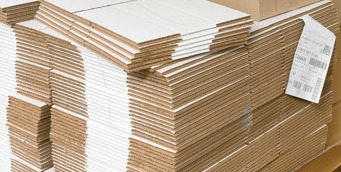 Edelweiss utilizes corrugated cartons supplied by Norampac, a division of Cascades to ship its product to customers.

“I am also a fan of the Repak RE15’s small footprint, but the machine’s operation and hygienic aspects are so good, that it’s like having a very high-end packaging machine at my disposal,” relates Lozynsky.
According to Reiser, the RE15 and RE20 versions of the Repak, are indeed designed and manufactured to the same standards as the larger, higher-end pieces, utilizing the same die lift technology, the same frame design, and the same operator interface—they are simply more compact machines with different cycle rates.
“The Reiser people have impressed me with their excellent level of service,” extols Lozynsky. “Their very experienced technicians treat us and our equipment the right way.
“Within the meats packaging industry, they have a very good reputation, and have done everything to maintain that with Edelweiss,” says Lozynsky. “I am very happy with Reiser.”
Other equipment utilized by Edelweiss at its facility includes: 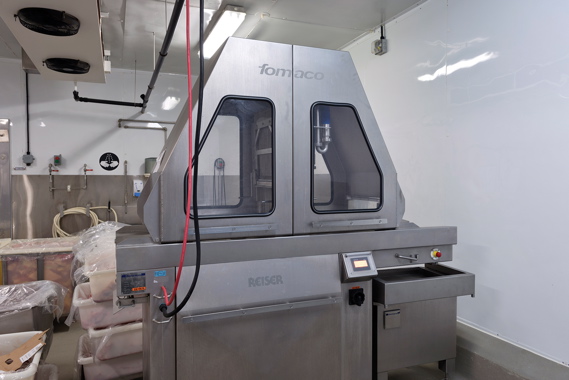 A Reiser Fomaco meat injector is used for curing, marinating and tenderizing meat prior to slicing. 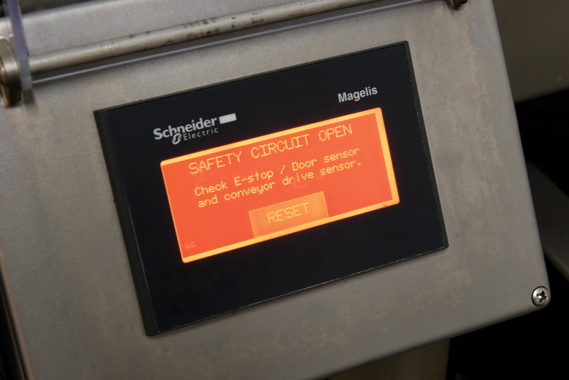 Lozynsky admits that as a new owner, the prospect of altering the path of the established Edelweiss Foods was indeed a daunting one, but the quick and recent success the company has enjoyed has moved all doubt far to the side.
“Being known as a pork processor creating European style products was a comfort zone for Edelweiss, but in order to progress, one has to step outside the comfort zone from time to time,” explains Lozynsky.
“But now we have carved out a reputation as a creator of Halal-certified products, including beef, chicken and veal.
“The global Islamic community is huge,” sums up Lozynsky, “so there is a large market out there for us to cater to. Along with great customers like Écolait who are receptive to our new concepts and product designs, we are getting requests from national poultry processors who want to work with us to develop muscle (beef) products for them.
“The future looks pretty good for Edelweiss.”