Even companies whose names are recognized worldwide must periodically re-evaluate equipment in order to maintain market dominance.

One such manufacturer learned that relying on an outdated palletizing robot gripper can lead to major problems. Fortunately, this manufacturer sought help from Premier Tech Chronos, a worldwide leader in packaging equipment expertise, headquartered in Rivière-du-Loup, QC, Canada.

Despite the fact that the customer’s unsatisfactory gripper had been manufactured by a different company, Premier Tech Chronos was willing to retrofit it in order to improve the customer’s output.

Problems One problem that needed to be solved, recalls Premier Tech Chronos sales manager David Lemaire, Eng., was a lack of reliability. Because the plant’s existing palletizing robot was manufactured by a company that outsourced components, the customer might wait months for replacement parts.

The second problem was that suction cups on the robot’s original end-of-arm tool (EOAT) deformed bags by creating a pyramid one-half to one-inch high in the center of each bag. Not only did that result in unattractive bags but it created palletizing problems as well, because deformed bags occupy more space. The resulting pallets were unnecessarily tall, requiring more wrapping material and decreasing stacking efficiency.

One advantage of the finger gripper is that because it lifts bags from underneath, it transfers bags without deforming them, producing uniform pallets. This makes it possible to create stacks that are four pallets high, which is more efficient than the shorter stacks that occupied more space in the customer’s warehouse before the retrofit.

Another advantage afforded because this EOAT lifts bags from underneath is that the possibility of dropped bags and resulting material loss is reduced. Plus, the greater placement precision provided by the gripper can increase throughput by as much as 20 percent compared with the vacuum model. The gripper increases the line’s flexibility as well, by palletizing a greater variety of containers than the vacuum EOAT it replaced. 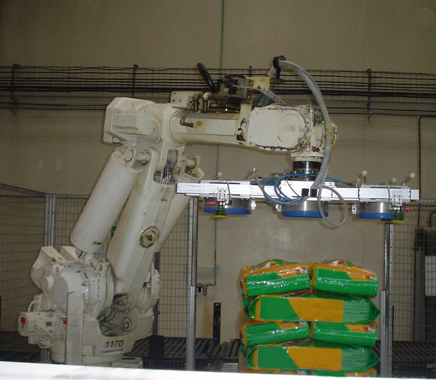 The obligatory BEFORE photo: the customer’s former vacuum EOAT deformed the center of each bag, making it impossible to stack pallets efficiently.

Equipment
The finger gripper permits automatic bag handling from the pick-up point to the pallet, providing support under each bag and quick, symmetrical release at the drop point on the pallet.

Just as important is the design of this tool, which cradles filled bags and provides support to ensure bags are not deformed. Designed to accommodate a broad range of bag types, the automatic bag-width-adjustment servomotor that was installed allows the finger gripper to be adjusted to accommodate bags of various widths during the same run. This increases process flexibility, efficiency and productivity.

The pick-up conveyor has a smooth PVC (Polyvinyl chloride) coat on its conveying side to ensure bags aren’t snagged or ripped. Existing safety fences were upgraded with new safety modules in order to respect the customer’s budget while meeting current safety standards.

A centralized HMI (Human-Machine Interface) was installed that greatly simplifies operations. Its one-point access for changing recipes limits the risk of human error, thereby reducing the potential for downtime.

Benefits to the client
Not only did this project allow the customer to simplify operations, update safety measures, increase throughput and acquire built-in reliability by retrofitting the existing EOAT with one from Premier Tech Chronos, it also simplified maintenance.

Since all of the other robots at this facility were provided by Premier Tech Chronos and have finger grippers, only one finger gripper needs to be kept on hand as a replacement for all the robots.

Although it’s unlikely that any of them will ever need to be replaced: Vacuum EOATs periodically wear out and must be replaced; finger grippers do not.

Another benefit came about because Premier Tech Chronos’ respect for the customer’s budget constraints created a two-phase approach: retrofit the EOAT first, with the option of installing a new palletizing robot later. This affords the customer flexibility in timing and budgeting.

Retrofit produces reliability
Retrofitting “was challenging,” reports client services engineering supervisor Louis Brochu. “But thanks to customer collaboration and engineering thinking that envisioned a creative and cost-effective solution, this project is a success.”

And the customer can resume dominating its market without worrying about equipment reliability.