Even the best-meaning business plans are ultimately only as good as their execution, which is often determined by the extent of the company’s commitment, ambition, scope and sheer will to succeed.

In this light, globally operating plastic films manufacturer Klöckner Pentaplast (kp) is charging ahead to change those global consumers’ general mistrust of all manner of plastic packaging into a more positive recognition of plastics as a vital part of a solution to the world’s environmental crisis rather than its source, as the current narrative in the CPG (consumer packaged goods) industries would have the public believe.

As one of the world’s largest producers of rigid plastic solutions for pharmaceutical and food packaging applications, the London-headquartered company—owned by U.S. private equity firm Strategic Value Partners, LLC—is well aware of the obligations that all industry leaders are expected to bear in the markets they serve.

And as most industry-leading trailblazers keep discovering time after time, there is no substitute for leading by example.

For kp, which operates 61 locations—including 35 production sites—in 18 countries around the world, the company’s formal vision of ‘The Sustainable Protection of Everyday Needs’ is a core principle guiding its ambitious and comprehensive approach to significantly lessening the carbon footprint of the global plastic packaging. 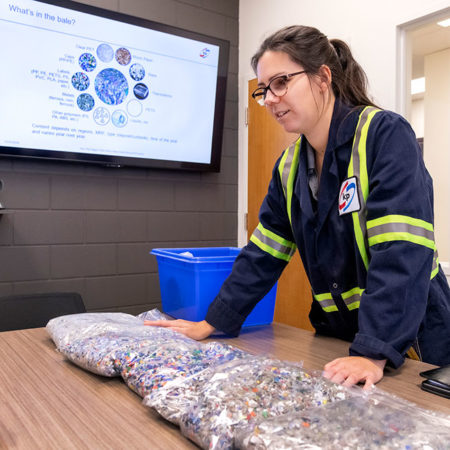 The Montreal plant’s process engineer Isabelle Mathieu explaining the process of separating different grades and color of PET flakes before they are melted into new plastic sheets and converted into food-ready meat trays containing high levels of PCR PET content.

As such, this precept is based on reasserting the value of plastic materials an integral part of the emerging Circular Economy model stressing the importance of designing products for a useful after-life long after the original packaged products have been consumed.

Acquired as part of the group in 2004, the former Les Plastiques Petco facility on the city’s eastern outskirts has recently undergone nearly $20 million in various capital investments and expansion, positioning the site as the company’s primary producer of PCR PET (post-consumer recycled polyethylene terephthalate) used as raw material in the manufacture of food trays for MAP (modified atmosphere packaging) and VSP (vacuum-skin packaging) meat industry applications for the North American market.

Mark Gonyar, director of business development with kp’s Food Packaging division, says the Montreal operation gained significant strategic importance for the company in the wake of its landmark 2017 acquisition of U.K.-based competitor LINPAC Packaging Group, which opened up vast new markets in the global fresh meat and produce markets.

The Canadian plant focuses exclusively on the production of PET plastic film and trays with 25-, 50- and 100-percent PCR content. The vertically-integrated operation has the capacity to process 23 kilotons of PCR PET per year, according to operations manager Marco Mercier, using recovered PET containers collected at municipal recycling facilities throughout Quebec and eastern Canada.

“This site is very unique for kp globally in that we are the only site to be processing our own PCR plastic bales and washing the flakes from the very beginning of the process,” says Gonyar, “which ultimately gives us full control to ensure the quality and the cost of the final product.”

“Most PET extrusion factories around the world do not have capabilities to do their own flake washing,” Gonyar told Canadian Packaging on a recent visit to the 100,000-square-foot facility housing a brand new extruder line, a state-of-the-art optical sorting system, high-performance thermoforming machinery, and a broad array of material handling and production equipment moved in from the original Petco manufacturing location in Montreal’s Anjou suburb.

Employing about 100 people, the vertically-integrated site runs flat-out on a 24/7 schedule throughout the year to keep up with growing market demand for PCR-content trays in the fresh protein markets, Gonyar relates. 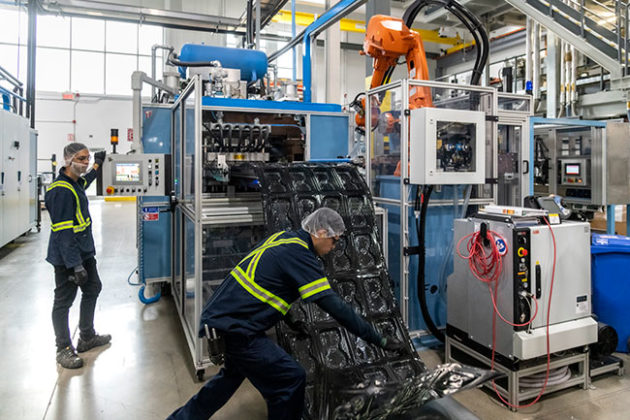 Machine operator guiding the continuous roll of molded plastic trays emerging from the high-speed thermoforming machine on to the converting machinery to be cut into individual trays and stacked into neat rows of nested trays ready for packing and shipping.

“This is the model that we hope to replicate at some of our facilities around the world in the future,” says Gonyar, noting the Montreal plant is one of only two food packaging plants currently operated by kp in North America, with the other five U.S. production plants focusing on pharmaceutical and medical device industries.

Says Gonyar: “The acquisition of LINPAC basically doubled the size of the company, whereby the healthcare division and food division are now both $1-billion businesses, but it also took us one step further in the value chain to retailers and brand-owners as our direct customers.

Whereas in the past kp served food industries indirectly by producing thermoformed plastic sheets that would then be cut to size by other converters, the company now manufactures finished food trays directly for its fast-growing list of food processing customers.

“Given the many synergies between the types of materials that kp and LINPAC were manufacturing and the markets we were targeting, we had a really good opportunity to expand our Montreal operation,” he says, “and to introduce some exciting new product lines to the market.”

According to Gonyar, the Montreal facility currently produces nearly 30 different standard tray designs to suit a broad range of MAP and VSP applications, while offering a host of environmental and performance benefits.

“We can produce 100-percent PCR content trays that do not require application of special barriers to achieve the necessary shelf-life for fresh meat products,” Gonyar points out.

“Our trays also incorporate special built-in sealing technology to enable better and faster sealing on the packaging lines, along with superior burst strength.”

Says Gonyar: “There is a very unique value proposition to the technology we are bringing to fresh-protein markets that go beyond being sustainable.

“There are also many functional and performance benefits that our trays offer for packaging products like ground turkey and beef, plant-based patties, burgers, steaks, chicken, and many other types of fresh protein,” he states.

“Our food trays are designed to offer our customers a highly differentiated, high-quality, premium packaging solution that is the result of all the many steps we take to remove as many potential contaminants as possible from our incoming PCR PET bales prior to the extrusion process.”

As the plant’s process engineer Isabelle Mathieu relates, “The first step is to separate green PET materials from clear materials, followed by separating all the labels, caps and other colored plastics that can’t be processed with clear PET.” 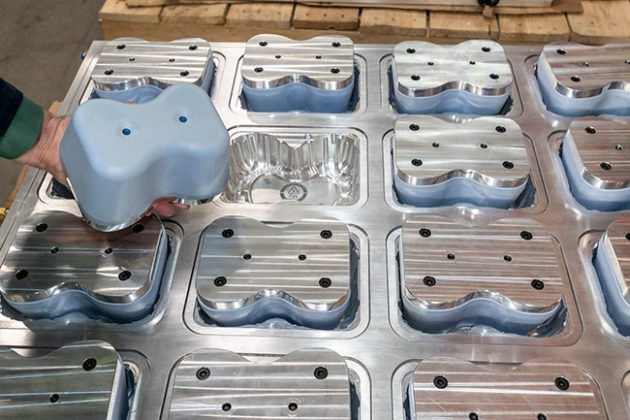 Rows of nested stacks of thermoformed plastic trays being forwarded along a sanitary conveyor towards the end-of-the-line packaging area to be boxed and readied for shipment to customers.

According to Mathieu, a typical 500-kilogram bale of recovered PET waste may contain a high number of potential contaminants such as paper, wood, ferrous and nonferrous metals, and other non-compatible polymers that must be removed from the incoming bales.

“It is always a challenge to find the right balance in removing as much contamination as possible without losing too much yield,” says Mathieu.

“After shredding the raw materials into flake form, it is thoroughly hot-washed with systems to remove the glue and any other debris,” Mathieu says, “until we get the pure clear PET flakes that can safely go into the extruder.”

The brand new extrusion line at the Montreal facility offers “The best available extrusion technology for PET recycling in the world,” Gonyar extols.

“It combines the accumulated process knowledge of our European operations with the vast expertise of various extrusion machinery manufacturers we have worked with over the years in one fully integrated system that performs with exceptional precision.”

While the supply of PCR PET feedstock is currently not an issue for the Montreal facility, especially since the recent closing of the Chinese market for recycle plastic waste, there is a gaping knowledge void in the consumer marketplace about the merits of plastic recycling, according to Joan Fowler, kp’s marketing communications manager for the Americas region.

“Not only do our trays provide the recycled content that our customers increasingly demand today,” says Fowler, “but they are also recyclable, due to their monolayer construction.

“That is what makes them a perfect fit as we drive for a Circular Economy,” says Fowler, citing the company’s widely lauded Positive Plastics Pledge, which is kp’s formal commitment to environmental excellence that includes using only recyclable and sustainably sourced materials at all its global operations over the next decade.

Released a little over a year ago, the four-pillar plan focuses on the company’s quest to:

According to kp’s sustainability director Lubna Edwards, “We have long recognized the benefits when it comes to the life-cycle of plastics due to its many sustainable features and benefits, and we believe a transformational shift is required in the way this material is managed by the industry, by consumers and by society in general.

“We have big ideas about reducing littering, ensuring that used plastic is separated as a valuable raw material, taking into account the carbon impacts of packaged products.

“We stay true to our purpose in the sustainable protection of everyday products,, including food protection, while helping to prevent food waste through the use of our packaging,” Edwards states.

As Gonyar points out, “We are collectively presented with a global challenge to come up with effective solutions quickly to reduce the amount of plastic that enters into our marine and land environment.

“It’s not even a landfill question: it’s the fact that it leaks into the waterways, washes up on the beaches, or gets littered on the side of the road, making it such a visible ‘culprit.’ It has become a victim of its own success.

“It’s really a consumer engagement issue,” he says, “but the industry and governments must also play a role by making plastic recycling more accessible.

“For example, plastic food trays are not widely collected for recycling in parts of the world, but we are constantly working on collection and sorting infrastructure, and recycling solutions with global partners, enabling an improved supply chain of recycled polymers to make our food trays that are also recyclable, creating a true closed loop.” 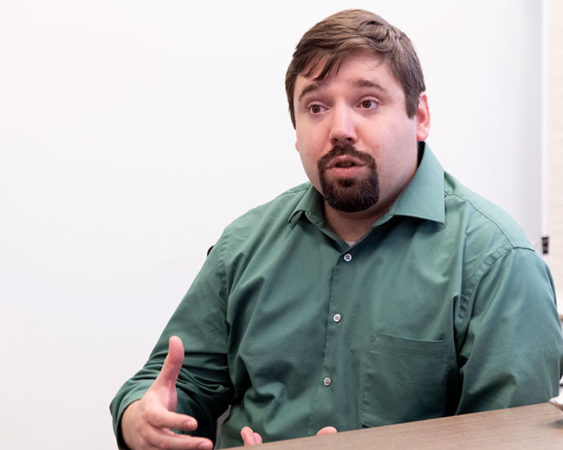 While the current state of the recycling of plastic food and beverage containers needs major improvement due to the use extensive use of multicolored or multilayer bottles that must be separated from the PET recycling streams, Gonyar says he remains optimistic that the industry will ultimately arrive at a workable, sustainable solution that will satisfy all the key Circular Economy requirements.

“The whole value chain has to play a role in the Circular Economy, from resin producers to consumers, manufacturers, retailers, packers and every other affected stakeholder including regional and local governments,” he proclaims.

“For all of their unique benefits, plastics have received a bad reputation,” he says, “but the industry’s ability to recycle its waste really comes down to an infrastructure problem rather than a capability problem.”

Fowler adds: “The last thing we want is our products, which help prevent food waste, to end up in the ocean or washed up on the beach.

“We want to get them back so we can reuse them again, to keep protecting valuable food products, pharmaceuticals and all that other good stuff everyday consumers need and demand, which is why plastic packaging became such a big innovation to begin with. It really is a miraculous material!

“A world without plastic packaging is not really a realistic or sustainable solution for our modern consumer-driven society,” Fowler concludes, “which is why kp will do everything it can to help make genuine sustainable plastic packaging through more innovative design and vastly improved recycling capabilities.