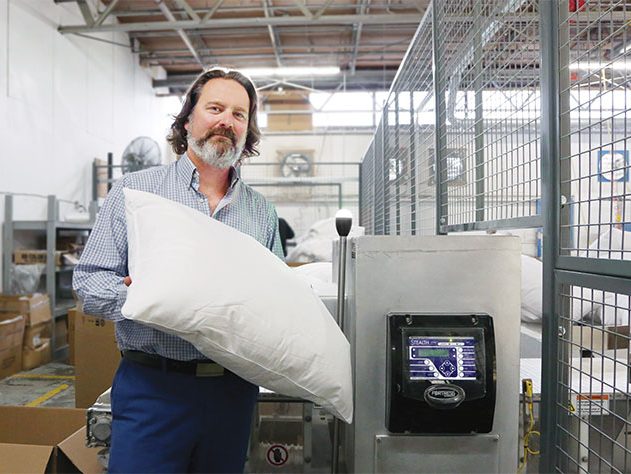 No good night sleep is complete without the perfect fluffy pillow, an art that North York, Ont.-based Hollander Sleep Products has mastered in their 100-year long history of developing high-quality bedding products.

Founded by Leo Hollander, the U.S.-based business predominantly focused on making luxury pillows, which quickly expanded into making other sleep products as the business took off.

“We just strive to make a great pillow and great products and great duvets and mattress pads for the Canadian marketplace.” 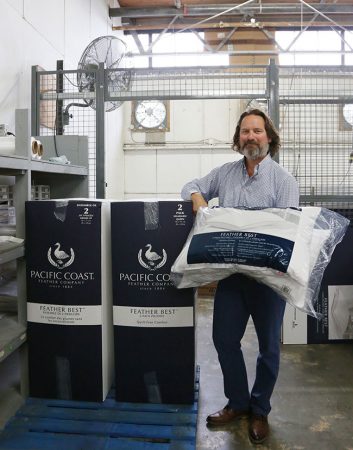 For a number of years, Hollander has been a proud supplier to warehouse dynamo Costco Canada, distributing their Beautyrest, Pacific Coast Feather and Great Sleep brands.

Hollander is committed to its procedures in safety and overall quality assurance, as Matukas and shares that there is always a risk that a broken sewing needle could accidentally end up in the pillow and his team needs to be prepared to rectify the situation.

“Even though we have needle guards on sewing machines and we have very experienced sewers, needles do wear out and they do break––it’s very rare, but it does happen,” Matukas told Canadian Packaging during a recent visit to the 135,000-square-foot, 85-employee operation working two shifts on multiple machines to keep pace with orders.

“At that moment, we can quarantine that particular sewer station and do a full inspection.

“We collect all of the pieces of the broken needle and put it in our broken needle record book, so that we have an actual assessment and categorization of that broken needle or replaced needle.”

Matukas is not the only one who takes the risk of contamination very seriously.

Due to a number of quality and safety requirements as per their agreement with Costco Canada, Matukas and the QA (Quality Assurance) teams had to re-evaluate the metal detection systems that Hollander had in place.

“We found that the metal detection machines that we had that we purchased from China were inferior,” Matukas recalls. 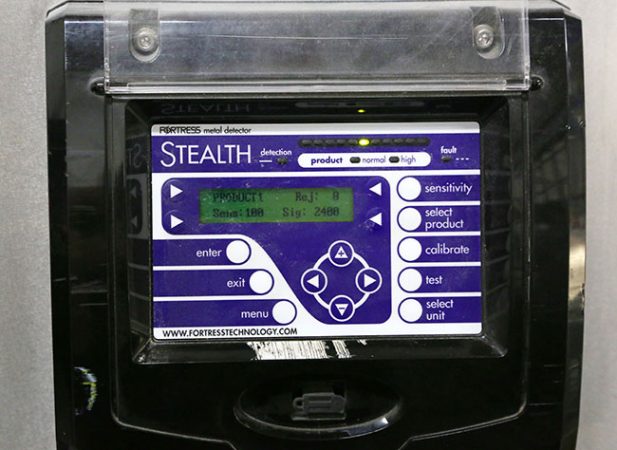 Hollander operators have praised the Fortress STEALTH Metal Detector system for its user-friendliness and accuracy, a major upgrade from the metal detectors that the facility had been using previously.

In their search for a more efficient metal detector, Matukas began consulting with Fortress Technology Inc., with discussions going back and forth for about a year’s time.

After much deliberation, Hollander decided to lease a Fortress STEALTH Metal Detector system, as they continue developing machinery or metal detection, more specific to their requirements with Costco Canada.

“It provides us the certainty that we’re catching everything that we possibly can from a metal perspective,” Matukas explains.

“We’re really trying to mitigate any kind of metal source that may have fallen into the manufacturing process.”

Renowned for its superior accuracy and reliability, the STEALTH Metal Detector has built-in data software that helps to catch product contamination.

A feature that is unique in Matukas’ eyes is the way the STEALTH Metal Detector does detection, due to the system’s lower aperture and smaller opening having a better chance of catching small and minute needles.

“We had to get quite finite in our detection and found that the Chinese machines that we were using were not detecting to the level that we required,” Matukas explains.

“Working with Fortress and the technology that they’re using provides a far better detection scenario.”

Prior to installing the STEALTH Metal Detector, Matukas and his operators would have to do nine-point tests on the metal detector systems to ensure that they are still operating at peak performance.

Now, they do not have to do that.

Thanks to its lower aperture and smaller opening, the Fortress STEALTH Metal Detector has the unique ability to catch even the smallest of needles that may have inadvertently fallen into the pillow during the sewing process, detecting to the superior level that Hollander requires.

“We now do a simple single test where we put the actual test card in the middle of the track and we let it go through the machine because the center is the weakest point of the machines detection,” Matukas elucidates.

“If it detects it at the weakest point, we know that the machine is operational and we can go back into production we do that every two hours during the course of the day to ensure that the machines are at peak operating condition.

“If it isn’t, we stop and recalibrate.”

In the synthetic pillow process, Hollander sources synthetic fibre that’s inside the pillow from North American sources, predominantly in the U.S., while the shells come from china, and poly bags, cartons and the corrugate are all sourced from Canadian companies that Hollander has partnered with.

When the raw materials arrive at the facility, the factory workers then promptly fill the pillows onsite.

The pillows are then run through the STEALTH Metal Detector, to ensure that it is free from any broken needles that may have inadvertently made its way into the product.

Once it successfully passes through, operators then package the pillows in the corrugate, put it on the pallet and then it is shipped off to the customer.

In the event the STEALTH Metal Detector catches a contaminated pillow, the machine makes a loud beeping sound and the belt that carries the item through the aperture stops automatically.

The workers there call in the QA department and they perform a full inspection to see where the contamination might have occurred.

“It really helps us have a second set of eyes to mitigate any metal falling into the pillow,” Matukas reflects.

While the STEALTH Metal Detector has only been installed at the facility for just a couple of months, Matukas has already seen a noticeable difference in the overall quality of Hollander’s pillows.

“They run more efficiently than the Chinese metal detection machines that we have so it actually has enhanced our production cadence,” Matukas extols.

“Because of the sensitivity of the machines, we are going to catch more potential issues and therefore we have a far higher level of confidence that the machines are doing what they’re meant to do.” 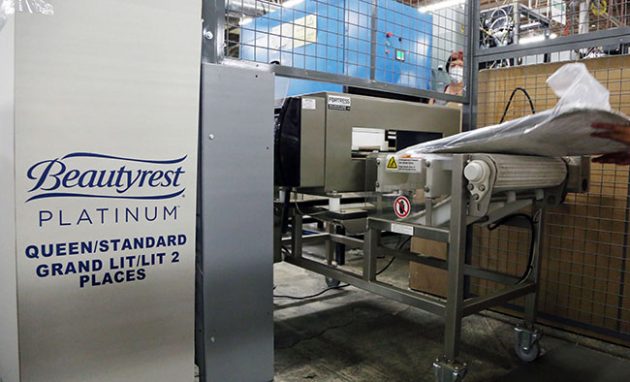 While the Toronto facility is currently leasing the metal detector, Matukas shares that Hollander will likely purchase the STEALTH Metal Detector system from Fortress, as he has seen a noticeable difference in the overall quality of Hollander’s pillows and bedding products.

Since the installation, the partnership between Fortress and Hollander has been smooth sailing thus far.

Praising the smooth process and straightforward lease agreement, Matukas has been impressed by the customer service that Hollander has received from Fortress.

“They came in and installed machines, gave us training, and they have a contact that our QA manager can call in case they’re really stuck,” Matukas shares.

While the STEALTH Metal Detector is currently on lease from Fortress, Matukas shares that Hollander’s Montreal facility purchased the system, which fortress built on their behalf based on their specifications for mattress pads.

Because of the experience in Montreal and through leasing with them, Matukas says that there is a good chance that the Toronto-based Hollander facility will end up purchasing from Fortress altogether.

For now, Matukas shares that the number one priority for Hollander is to maintain their business and to continue to grow in an ever-competitive marketplace, knowing that retailers choose their suppliers based on the overall quality of the product.

“There are many players out there manufacturing pillows and coming from various sources,” Matukas says.

“We’re fortunate enough we can manufacture in Canada and supply our Canadian customers with a quality product and that’s one of the reasons why we still have manufacturing in Canada.

“We can control the whole process and therefore we know that the customer is receiving product that is built by Canadians for Canadians.” 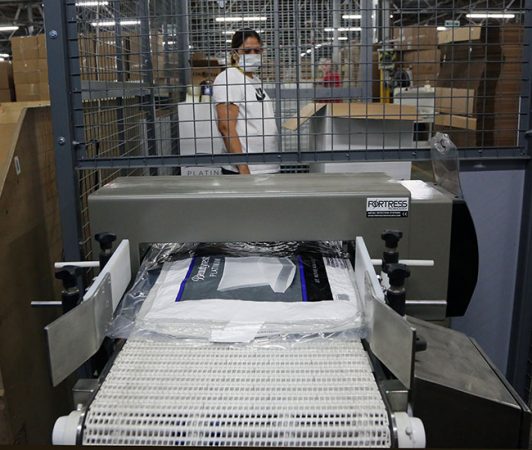 In the event a needle inadvertently makes its way into the pillow, the Fortress STEALTH Metal Detector will make a loud beeping noise and the belt will automatically stop, allowing the Quality Assurance department to act fast.

With several internal and retail awards accredited to their commitment to safety and superior products, they serve as a testament to Hollander’s commitment to giving their customers the bedding commodities that they deserve.

“Quality control has to be on top of things, because you’re trying to protect the public,” Matukas reiterates.

Concludes Matukas: “Especially if you’re sleeping on it like a pillow.”