Launched 35 years ago, the Diet Coke brand of sugar-free soft-drink could well be one of the most successful new product developments ever commercialized by its iconic brand-owner The Coca-Cola Company.
Named as the Brand of the Decade by the authoritative Advertising Age magazine at the end of 1980s, the aspartame-sweetened cola had grown far beyond its original marketing mandate of becoming North America’s Number One brand of diet soda.
For most of this decade, in fact, Diet Coke managed to remain the second-bestselling soft-drink in the U.S. and Canadian markets period—its market share topped only by the company’s flagship Coca-Cola core masterbrand.
While this remarkable market success is attributed to a wide multitude of factors, there is no denying the critical importance of numerous brand extensions, including the Caffeine-Free Diet Coke, and imaginative marketing campaigns periodically carried out by the brand on a massive scale to retain its loyal consumer following.
And while the current health craze sweeping the North American food-and-beverage markets has put curbs on that continuous market share growth in the last couple of years, Diet Coke’s most recent marketing response to reversing  that trend in Canada has yielded a true masterclass of
branding ingenuity and breathtaking packaging innovation enabled by new-generation digital printing press technology.
Launched in September of 2016, the brand’s three-month-long One of a Kind cross-country marketing blitz produced millions of individually-labeled Diet Coke bottles decorated with unique graphics on each and every single glass and plastic bottle used during the promotion. 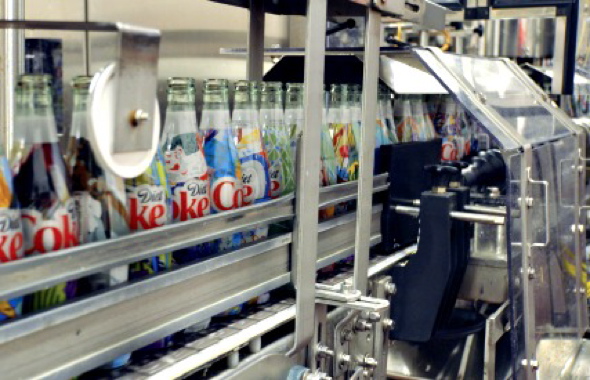 Iconic contoured glass bottles of Diet Coke, each boasting its own unique design graphics, being transferred towards filling and capping stations inside a Coca-Cola bottling plant.

Using the HP Indigo 6600 digital printing presses manufactured by leading global printing systems manufacturer HP Inc., the company’s design team worked closely with Perennial Packaging Group to create millions of unique design patterns for the pre-printed shrinksleeves and rollfed film applied onto the 237-ml and 335-ml iconic contoured Coke glass bottles, along with the 500-ml PET (polyethylene terephthalate) plastic containers.
As Coca-Cola’s brand manager Melanie Isaac explains, the primary idea behind producing all this one-off packaging was based on enticing the millions of Canadian Diet Coke drinkers to celebrate their individuality and uniqueness by being able to choose whatever design catches their fancy at the moment of purchase—knowing that there is no other design just like it anywhere else.
“The One of a Kind digital printing program pre-presented a unique and exciting opportunity to appeal to more than just the everyday diet beverage drinkers,” she explains.
“We saw that uniqueness and personalization have become of growing value and relevance to people across an increasingly wide spectrum of the population,” she says, “and we quickly identified packaging as the primary means to support this growing consumer trend and an opportunity to connect with a larger Canadian audience.
“For those who may already drink Diet Coke, the unique designs provided a unique way to celebrate the brand they love,” says Isaac.
“For those who may not have had a Diet Coke for a while, it was a great way to get their attention and rekindle their interest in the brand.
“And for those who may have never had a Diet Coke, it was a reason to give it a try,” Isaac proclaims.
“The ‘One of a Kind’ program was all about connecting with Canadians who not only love the great taste of Diet Coke, but who see their unique personal style reflected in one of the millions of available designs,” adds Michael Samoszewski, Coca-Cola Ltd.’s vice-president for the sparkling business unit.
“With millions of designs to choose from, we gave Canadians an opportunity to have some real fun with our brand by finding that one special Diet Coke bottle that truly reflects what makes them unique and ‘One of a Kind’.” 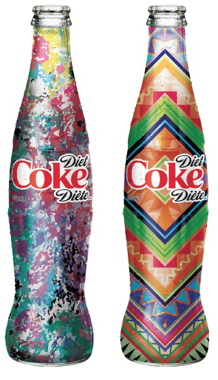 None of this would have been commercially feasible without the HP 6600 digital press technology and HP’s proprietary SmartStream Mosaic hyper-customization software for automatic generation of millions of entirely new graphics from one of 36 base designs.
Inspired by the unique bubbles, fizz, taste and spirit of the Diet Coke soft-drink, the base designs were developed over the intense 14 months of preparation leading up to its September 2016 launch, which also included development of a multi-dimensional media, public relations, experiential, and in-store marketing campaign to support the rollout.
“The unique technology allowed us to start with a few base designs to create millions of permutations of the base designs—resulting in millions of unique, never duplicated layouts,” says Isaac.
“The labels were re-registered in the HP Indigo 6600 using Mosaic Software to create and manipulate the base artwork into a single unique variable print from multiple base artworks.
“The result was a truly ‘One of a Kind’ image on each bottle,” says Isaac, noting Diet Coke first used this technology in 2014 to execute its inaugural global One of a Kind campaign in Israel—where the HP Indigo digital presses and inks are actually manufactured for the world markets.
The successful execution of that widely lauded marketing initiative—generating about two million individual bottle designs—quickly enticed Coca- Cola’s Canadian and U.S. businesses to follow suit last year, according to Isaac.
“In addition to the two glass-bottle SKUs (stock-keeping units), we also used the same technology on a 500-ml PET bottle using rollfed labels,” Isaac notes.
“We also created three unique designs for the Diet Coke 355-ml and 222-ml cans, albeit we used a different printing technology for that part of the project.” 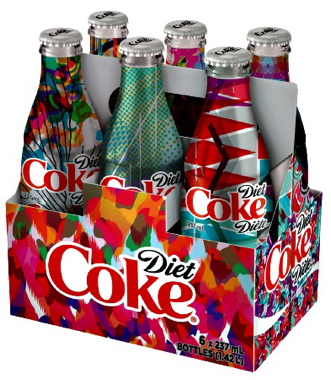 By any measure, the One of a Kind campaign was a resounding success in Canada, according to Isaac.
“The market response was amazing, with the 237- ml six-packs in particular, selling far faster than expected,” Isaac extols. “The One of a Kind program was well-received by customers and consumers alike.”
At this year’s 2017 Canadian Leadership Awards national packaging competition of PAC, Packaging Consortium, the One of a Kind packaging was selected as the winner of the best-of-show Consumer’s Voice award sponsored by the Canadian Packaging magazine, as chosen by a seven-person judging panel consisting of regular contributors to the magazine’s popular last-page Checkout product review column.
“We leveraged packaging design to create a meaningful one-to-one connection that Canadian consumers could get genuinely excited about,” Isaac says, “because it allowed them to find that unique design that matched their personal style—while reinforcing the brand message that although Diet Coke is available in millions of unique designs, it still has that same great taste.
“As the program’s value relied solely on the design side, superior packaging execution was paramount to its ultimate success,” Isaac sums up. “No other brand in our competitive set has ever executed a program like this in Canada, and we are proud of all the recognition and applause that this initiative, the largest for Diet Coke in 2016, generated across the country.”