Some might scorn at the idea of running a business with their family, but for the four Zeppilli brothers and co-founders of Bad Monkey Popcorn Inc., a gourmet popcorn company headquartered in Saint-Laurent, Montreal, getting a chance to reinvent Canada’s relatively unseasoned popcorn industry was too good and opportunity to let it pass by.

Getting the company’s curious moniker from their mother, who would occasionally call them her “bad monkeys” when they were growing up, the close-knit brother hoods operates their business out of a 10,000-square-foot facility employing 20 people on one daily shift, primarily in the mornings.

“My brothers and I noticed nothing really changed in the popcorn industry in a really long time,” Joseph Zeppilli, chief executive officer and the second-oldest of the four siblings, told Canadian Packaging in a recent interview.

“We wanted to not just reinvent popcorn because it’s been around forever, but we just wanted to make it cool and fresh and fun again.”

As Zeppilli explains, his oldest bother Fabio handles the contracts for the business, while younger brothers Luciano and Matteo are the company’s photographer and chef, respectively.

Soon after founding the company in 2014, the brothers started to grew their client base primarily through concession business operators at the many prestigious festivals and cultural events held throughout Canada each year—including the Grand Prix, TIFF, Cirque du Soleil, Just For Laughs, and Jazz Fest.

Along the way, the company also gained much-needed national recognition when the brothers appeared on the popular Dragon’s Den television program on the CBC (Canadian Broadcast Corporation) network in 2016.

By the second year in operation, Bad Monkey Popcorn had entered the retail market and quickly started taking that channel by storm by attracting Top Tier retail customers such as Metro, Sobeys and Loblaws.

Now sold across Canada, the popcorn is vegan, gluten-free, peanut-free and kosher. With popcorn already being a gluten-free and healthy snack, Zeppilli quickly discovered that most of their clientele were primarily health-conscious women, who also wanted to adhere to their children’s nut-free school policies. 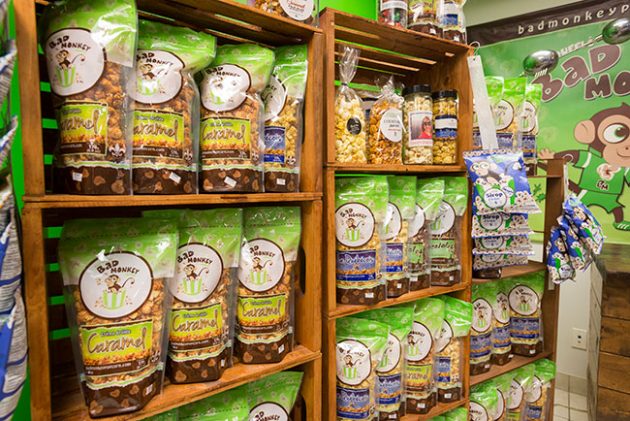 “A lot of women are buying the snacks for their children who have nut allergies or the women these days are a little more health conscious so they’re gluten-free or there’s no dairy,” Zeppilli says. “So we do all of these certifications for our customer base, which is primarily women.

“For us, we work with too many kids to not be peanut free.”

The tantalizing flavors include classic original, caramel crème brûlée, chocolate and sea salt, as well as their limited edition Baby Girl, so named because of the distinctive cotton candy and pink cherry coating.

Blood may be thicker than water, but when it comes to business, Zeppilli and his brothers acknowledge that as soon as they walk through the door, they are no longer brothers. Instead, they are business partners.

While they fight like brothers do, knowing their respective roles in the business has helped them to see that there is a hierarchy within the business.

“If we didn’t look like each other, most people wouldn’t know that we’re brothers because we all look alike, but we don’t really act like it at work,” Zeppilli explains.

“I’m CEO, so they have to listen or when my brother who is a chef is telling me about flavors, I have to take a back seat and listen to him, or my photographer brother telling me what looks good with art.

“My other brother does all of the contracts so we have very good distinct roles and I think that’s what keeps us from fighting. We know our roles and we know our positions and we always go with what’s more logical.”

The eye-grabbing monkey design on the packaging is credited to younger brother Luciano, who is not only a photographer, but also an artist. Impressed with the results from his younger brother, Zeppilli recognized that packaging is important in Bad Monkey’s business strategy and growth.

“You could have a great product, but if it doesn’t look good nobody’s going to try it,” Zeppilli explains.

“We don’t have the name yet like Kellogg’s or Lay’s that people would be like, ‘I’ll try this.’ The packaging has to be appealing. I think it plays a very important role and then after the customers try it if they like it, you have to keep in mind that packaging is something that is not going to go away.

Although they are doing well in their Montreal location, Bad Monkey is still a small fish in a big pond. Due to their power and size, Bad Monkey’s biggest competitors in the industry are snack food powerhouses Lay’s, Orville Redenbacher and Kellogg’s. Zeppilli notes that Bad Monkey is not quite yet at the same level as these businesses, because of their machines and equipment. 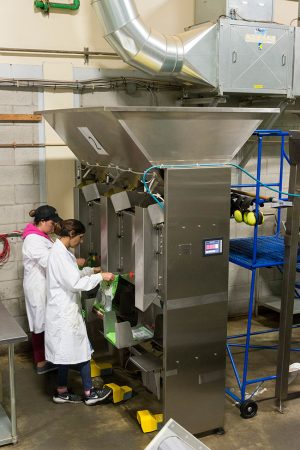 Installed by leading Montreal-based automation powerhouse Tangible Innovation, the Packaging Machine P115-01 assists in bagging and labelling the different flavors of popcorn prior to distribution

Zeppilli was introduced to Montreal-based automation company Tangible Innovation, who supplied them with their packaging machines. Wanting to support local businesses, Zeppilli was impressed by the process of the Packaging Machine P115-01 and the fact that it had been customized to their needs. Bad Monkey has been partnered with Tangible Innovation for two years. While they have tried and tested a plethora of different bagging companies, Bad Monkey does not have a steady supplier and are currently shopping around for one.

The facility currently packages the product in small, medium and large sizes. The small is for the vending machines, and convenience stores; the medium size is used for popcorn bags shipped to grocery stores; and the large ‘familiy-sized’ bags are distributed to a variety of different locations, including bars, hotels, restaurants, and Cirque du Soleil.

“We’d like to buy from Tangible Solutions as well, but with this third machine we need is not so custom,” Zeppilli explains.

“It’s an expandable pouch, it’s a form-fill pouch so it’s very standard in the industry. Maybe we won’t work with him for this one, but definitely for other ones.”

“Probably in the business what’s been most challenging is the packaging, and machinery just because we’re new to the business,” Zeppilli says.

“One thing I’ve learned in business is never to rush into anything so a lot of the time we make decisions and they can take very long, but it’s for a purpose.

“We ordered bags quickly and then they had the wrong UPC code on them, so we learned that they hard way.” 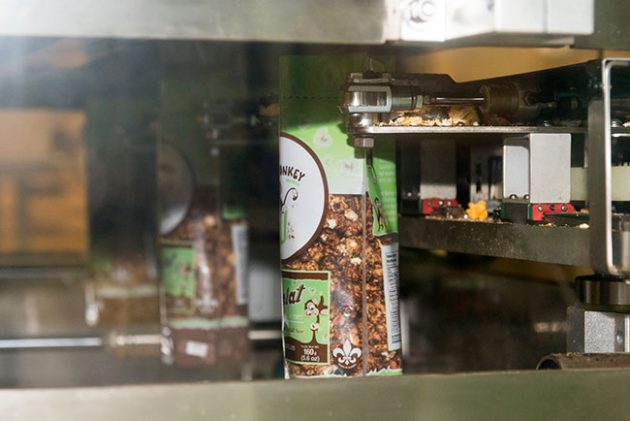 Humid weather affects the overall freshness of the popped product, which is why it is essential for the facility to have a humidity room on-site to ensure that only freshest possible products hit the shelves.

While Canada is known for its blistering cold Canadian winters, the humid summers have proven to be a problem for the popcorn manufacturing industry.

This past summer had hit record-breaking heat waves that affected the freshness of the popcorn once it was bagged and sealed. Consciously paying more for higher quality bags, kernels and staff salary, Zeppilli
was devastated by the spoiled popcorn and sought to find a solution for the future.

“We noticed during just a few peak days of the humidity that our popcorn had gone out and it wasn’t as fresh as I liked it so that for me killed me slowly on the inside because we put so much effort,” Zeppilli
explains.

“When the product comes out not how we designed it, it just gets me really upset, but you can’t dwell on that and you have to move forward.”

Since that heat wave, Zeppilli and his team put in the steps to control the heat during those muggy summer months, by having a humidity room on site.

Bad Monkey is not only recognized for the health-conscious approach they take towards snacking, but they have also made a name for themselves for their philanthropic endeavours. In collaboration with
École secondaire Évangéline, Bad Monkey has an autism program, where seven kids per year come to the facility and they take on tasks. These tasks include putting expiry dates on the bags or organizing the
facility. 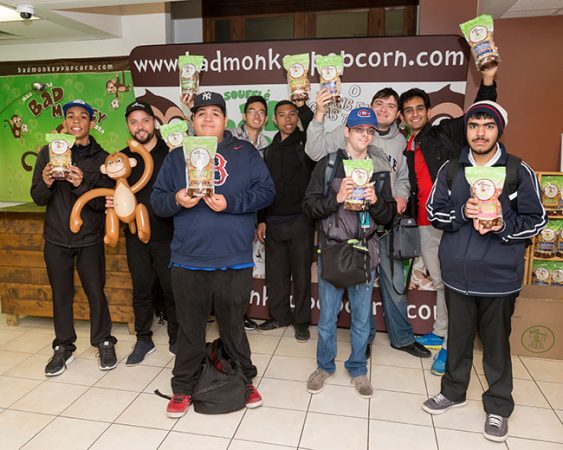 In collaboration with École secondaire Évangéline, Bad Monkey has an autism program, whereby seven kids come to the facility each year to take on tasks such as putting expiry dates on the bags, or helping to keep the facility clean and organized.

“We donate a lot. We’re involved in a lot of charities and that’s something that’s important to us as well, it’s not just making a product.

“That’s why we started this business because we wanted to give back to the community and everyone says that, but we actually do that.”

While still new to the market, Bad Monkey is just getting started. Once they are able to acquire more automated machines and expand their warehouse, it is Zeppilli’s hope that they will eventually be able to
manufacture more than just popcorn, and add pretzels and candy to their line of products, similar to how Kellogg’s is not just associated with one particular niche snack.

“We think, breathe and sleep popcorn,” Zeppilli says. “But I don’t want to just be known as popcorn. I want to be known for other snacks, so that’s what our plan is, we’re looking long-term, and I’m not looking
just for short-term. We’re looking for the long-term in our business.”