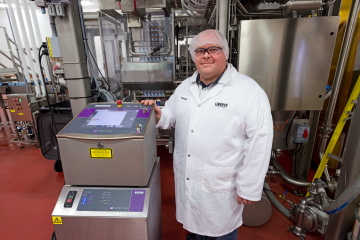 Anyone who has recently glanced at the dairy aisle of a grocery store would be hard-pressed not to have noticed that the yogurt section has more or less taken over as the aisle’s new dominant bestseller seemingly overnight.

Which in retrospect seems only inevitable—thanks to the product’s inherent and virtually unrivaled ability to combine an inexpensive, delicious and nutritious taste experience in small, single-serve plastic cups that provide a delicious ‘good-for-you’ snack or meal-time option both at home and on-the-go.

And while yogurt has been on mankind’s menu in one form or another for an estimated 4,500 years, its long-awaited embrace by western consumer societies as a highly functional and super-healthy product is a fairly recent development.

But better late than never. A Markem-Imaje 7031 HD laser coder safely marks the tops of 24 yogurt lids in less than one second on the Erca filling line.

Loaded with the so-called ‘good bacteria’ required for maintaining a healthy digestive tract, modern-day yogurt is truly a unique dairy staple that packs a formidable mix of the much-needed proteins, calcium, vitamins B-2 and B-12, potassium and magnesium that are considered to be essential ingredients for maintaining a healthy body and appearance.

In fact, some yogurt aficionados have been known to apply it to their skin to achieve smoother texture, as well using it as polish for candlesticks.

So all in all, it’s fair to say that there has never been a better time to be in the yogurt business for the St. Hubert, Que.-headquartered Liberté Brand Products Co. than now.

Founded in 1936, the company manufactures a broad range of delicious all-natural, organic and specialty dairy products—specializing in the many varieties and flavors of yogurt created in an artisan-like fashion. Operating distribution centers in St. Hubert, Brampton, Ont., and Richmond, B.C., as well as two large production facilities in Toronto and St. Hyacinthe, Que., the company is also a highly-reputed producer of cream cheese and cottage cheese originally developed specifically to serve the dietary needs of the large Jewish community in the Montreal area, according to Normand Champagne, plant manager of the 120,000-square-foot, 160-employee St. Hyacinthe facility.

“Liberté was formed by a family of Russian Jews fleeing persecution at home who first arrived New York City, where they were deeply inspired by the majesty of the Statue of Liberty,” Champagne told Canadian Packaging in a recent interview.

“So after moving to Canada to start their dairy business, producing cream cheese and cottage cheese, they named it after the iconic statue of freedom.” A Markem-Imaje 7031 HD laser coder adds permanent coding by removing a layer of ink from the sealed surface to apply best-before dates and time of packaging information.

After gaining a solid reputation and renown as a top-notch traditional and artisan manufacturer of dairy products, the company eventually relocated to a bigger premises in Brossard, Que., continuing to produce its popular cream cheese but also adding yogurt to the menu, Champagne relates.

And while the company still strictly adheres to its original artisan roots and traditional craftsmanship stressing product quality and purity above all else, the sheer volume of yogurt it produces and markets nowadays is quite simply breathtaking—driven by the phenomenal market success achieved in recent years by its popular Méditerranée and Greek yogurt brands.

“In fact, we are a national leader in the production and sale of Greek-style yogurts made at our HACCP (Hazard Analysis Critical Control Points)-certified St. Hyacinthe plant,” which was originally a 30,000-square-foot facility acquired by Liberté in its 2008 acquisition of the Kooll Desserts company.

“Having the production facility in such an important food-industry city like St. Hyacinthe is very important, as we were able to vastly expand our business potential,” says Champagne, explaining the quadrupling of the plant’s original size in just four years.

“Because Liberté had a sound plan in place, we were able to make substantial capital investments in the facility while expanding and upgrading it to its current size,” Champagne explains. Naturally, the company’s impressive growth and potential has attracted a number of deep-pocketed suitors over the years, with French-headquartered dairy powerhouse Yoplait acquiring it in 2010 and, a few months later, the international division of General Mills taking over ownership in January of 2011.

Despite the impressive recent upgrades to the facility size, and technologies and strategic importance, Liberté firmly remains in no rush to alter its hard-earned artisan image, asserts Champagne, citing the company’s strong community roots and CRS (corporate social responsibility) credentials displayed by the company’s ongoing support for further development of organic products and farms, implementing more sustainable work methods, and participating in many local-level community ‘green’ projects and programs.

But above all that, the people who work at Liberté still consider themselves to be artisans producing high-quality artisan products,” explains Champagne, pointing out that unlike most of the competing mass-produced yogurt products in the marketplace, Liberté’s yogurts do not contain any starches or thickening agents—letting the products’ all-natural composition and appearance to speak for itself.

Says Champagne: “We are very proud to have made our place of business less about solely being a factory, but more about creating a business with a real purpose to it.” Freshly-filled plastic tubs of Liberté Sour Cream on FlexLink conveyors heading towards the Markem-Imaje 9232 small-character inkjet coder for best-before and lot-coded data application onto the lidding.

According to Champagne, that purpose is now exceptionally well-served on a daily basis with the plant’s brand new Erca filling line used to produce multipack single-serve yogurt in a swift, operator-friendly process, whereby the Erca form/fill/seal machine quickly heats a plastic sheet, forms it into a plastic cup shape base, cools the plastic, and then fills it four at a time with up to four different flavors of fruit-in-bottom or stirred-fruit yogurt varieties. After the lidding is done, the packs are swiftly conveyed for lot-code and best-before date application now handled by the plant’s brand new, state-of-the-art laser coding system.

Manufactured by Markem-Imaje, the 7031 HD (high-definition) laser coder is able to mark the tops of 24 yogurt cups per cycle at such a high rate of coding speed, it enables Liberté to reduce its operating expenses—Markem-Imaje told Liberté that in order to perform the same job, six standard continuous inkjet coders would be required. “We also save on production line downtime because, as with all laser systems, no time is spent adding inks to the machine,” says Champagne.

According to Markem-Imaje national sales manager Tony Stryker, “The laser system actually removes a layer of ink from the top surface of the seal without compromising the product seal while adding 24 codes to the yogurt packs in less than one second.”

For Liberté, the Markem-Imaje 7031 HD can print over a large area: up to 16×16-inches with a single head. With a higher energy output and smaller footprint than other competing laser coders on the market, the 7031 HD is easily integrated while using less power which helps extend the life of the laser head to over 30,000 hours of operating time.

And when Liberté was looking for an additional solution, it was just icing on the cake for Champagne when he discovered that parent-company Yoplait also had a very strong global partnership with Markem-Imaje.

After the filling and coding, the yogurt multipacks travel through a Safeline industrial metal detection system manufactured by Mettler-Toledo International Inc. before moving through a custom-manufactured CPS 50 compact robotic packaging station designed and built by the French-based Automation Robotic Packaging (ARP). Some of the important components utilized within the ARP includes:

•  a conveyor system designed and manufactured by FlexLink that guides materials through each stage of the station;

•  AC motors manufactured by SEW-Eurodrive and Festo pneumatics providing power to the conveyor.

The easy-to-operate ARP is able to pick up multipacks of four, six, eight, 12 or 16, rotate it 90-degrees and place it atop a paperboard blank provided by St. Hyacinthe’s Groupe Ecco. The paperboard blank has a jet of hot glue supplied by Technical Adhesives applied via a Nordson ProBlue7 adhesive application system as the paperboard is folded around the yogurt pack to form a sleeve.

The ARP then picks up the sleeved yogurt pack, rotates it another 90 degrees and places it atop a larger corrugated tray blank made by Norampac, a division of Cascades. After enough sleeved packs are placed onto the corrugated blank, the ARP folds the blank forming a tray at a high rate of speed before stacking it. A small-character Markem-Imaje inkjet coder is used to apply best-before and lot code data onto the lids of Liberté’s organic, fat-free yogurts.

Contained within the ARP, a Markem-Imaje 2200 print-and-apply labeler creates a white adhesive thermal transfer containing manufacturing date, expiry date and product barcode data and quickly applies the label to a sidewall of the newly formed trays.

According to Stryker, the 2200 can print and apply labels at rates of up to 125 packs per minute, adding it is designed to offer flexibility as a single standard printer but with many label applicator options such as side-, top-, front-, front and side-, corner wrap and more.

While containing robust components, Stryker says that for parts that typically see more wear during prolonged operation—like the print head and roller—it can be easily replaced without the use of tools, ensuring minimal downtime. As well, to avoid unnecessary production stoppages, the 2200 is designed to match both label stock and ribbon at 560 meters to assure both are replenished at the same time.

Another recent purchase for Liberté, is a Markem-Imaje CoLOS Create Pro software tool that provides the yogurt manufacturer with the ability to create label images including text, bar codes, logos, time and date fields, counters, automatic date offsets and more. Although available separately, this tool is part of the CoLOS Enterprise network version that allows for two-way communication with an unlimited number of printers.

“Every printer on a factory floor can be connected to a single computer where all of the printer data is stored and maintained centrally,” explains Stryker adding that CoLOS Enterprise provides real-time printer status information alerting the operator if a printer is getting low on supplies or has a fault condition.

“The dairy industry—and the yogurt industry especially—is a very competitive segment within the food-processing sector,” explains Champagne. “It is important for us to be considered a leader within the yogurt-manufacturing industry, and not to be satisfied in merely following others.

“Liberté is aware that the Greek and Mediterranean yogurts are currently a hot commodity for consumers, and we have to keep our competitive edge through constant innovation,” sums up Champagne, “and that includes the way we operate our production line.

“We are always looking for great new equipment, like the Markem-Imaje 7031 HD laser coder and the ARP and Erca equipment, to give us a competitive edge to help us maintain our leadership in the yogurt processing market well into the future.”