Genuine packaging sustainability does not happen overnight or in isolation.

Which is why progressive retailers who truly believe in the virtues of reducing their carbon footprint have much to gain from hooking up with business partners with extensive experience in developing effective sustainable packaging solutions.

Founded in 1954 in Montreal’s famed Little Italy district, independent grocer Fruiterie Milano offers a compelling proof of the benefits of such strategic alignment.

Celebrating its 65th anniversary this year, the popular grocer has long been acknowledged as one of eastern Canada’s best shops to purchase authentic made-in-Italy specialty foods and delicacies—ranging from olive oils and fresh pastas to buffalo mozzarella and other gourmet cheeses, along with a broad array of Italian deli meats such as capicolo, prosciutto, sopressata, mortadella and numerous salami varieties.

Considered a landmark Saint Laurent Boulevard institution by the area’s residents, many of them descendants of early Italian newcomers to Canada during the early 20th Century, the thriving family business has expanded nearly a dozen times since founder Vincenzo Zaurrini first opened its doors as a small boutique specializing in imported Italian-made foods. 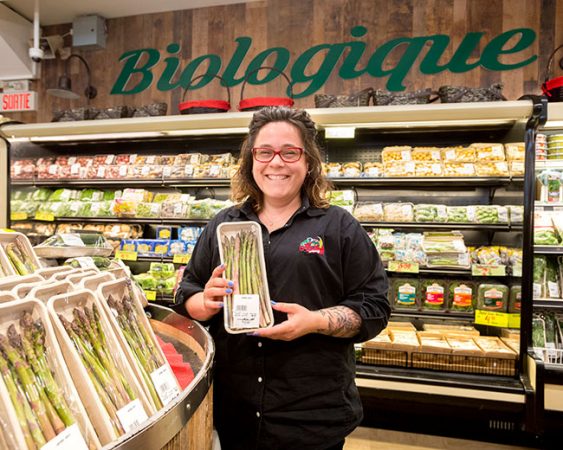 Nowadays, employing about 100 people and stocking a broad selection of mainstream food and beverage products in addition to its Italian novelties, Fruiterie Milano has recently embarked on a quest to raise its community profile by embracing newer and more eco-friendly product packaging than it has in the past.

According to store manager Nadia D’Amour, the primary impetus for this change came primarily from the store’s own loyal customers, who would often express their concerns over apparent product overpacking and other packaging excesses to the store management and employees.

Upon seeing these comments becoming more common and frequent, current owners Celia and Mario Zaurrini recently decided there was no better time than the present to turn over a new green leaf in the company’s illustrious history.

Just as the Fruiterie Milano owners began identifying opportunities for introducing more sustainable packaging to their operations about a year ago, they got a well-timed call from a sales representative at Veritiv Canada, Inc.’s Montreal office inquiring about their packaging needs and requirements.

“It was a case of very good timing for both ourselves and Fruiterie Milano,” according to Pascal Lacasse, Veritiv Canada’s director of packaging sales for Quebec and eastern Canada.

“We contacted them just as they started looking for a partner to supply the right packaging products that would help improve their environmental profile,” Lacasse told Canadian Packaging in a recent interview.

Specifically, they wanted to replace all the polystyrene foam trays they were using with something that did not end up going to landfill and stay there forever.

“As it happened, we also just began stocking an exciting new alternative solution to the traditional foam trays commonly used by grocery retailers for packaging smaller quantities of fresh fruits and vegetables,” Lacasse relates. “It was a very happy coincidence.”

“Once they saw what we had to offer, they wasted no time in placing the initial order and proceeding to move ahead with their sustainability program.” 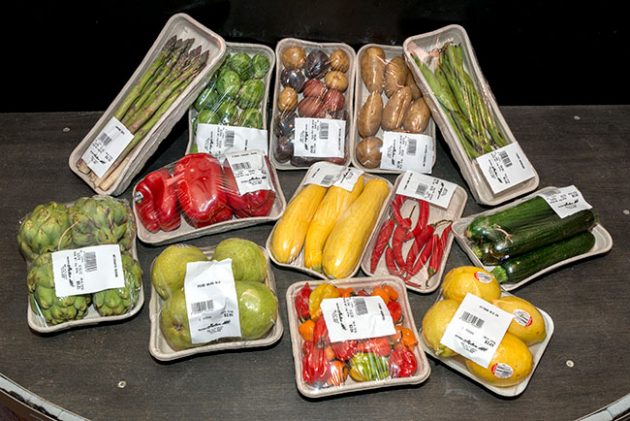 Available in a growing variety of sizes and shapes, the EarthCycle thermoformed molded fiber trays are manufactured in Canada by CKF, Inc. via a proprietary process using 100-percent FSC-certified blend of virgin and recycled wood fibers.

Manufactured in Canada by Hantsport, N.S.-headquartered CKF Inc., the EarthCycle™ brand thermoformed pulp trays distributed by Veritiv are made from a blend of wood fibers— using a proprietary process to create fully compostable, renewable and recyclable trays with outstanding shelf-life properties for the top-sealed products placed inside them.

According to CKF’s director of market development Shannon Boase, “Being certified home-compostable and also widely recyclable in most common paper waste streams gives EarthCycle packaging a lot of environmental credibility.

“It is a terrific sustainable alternative to help retailers reduce their dependence on single-use plastics and other non-recyclable materials.”

Developed as an alternative for plastic packaging used for smaller-sized fresh fruit, vegetables, berries and mushrooms, the home-compostable EarthCycle packaging received widespread global acclaim earlier this year at the massive Fruit Logistica 2019 international trade fair for fruit and vegetable marketing in Berlin, Germany, where it picked up a bronze (third place) Fruit Logistica Innovation Award from hundreds of entries submitted to the competition.

For store manager D’Amour, who joined Fruiterie Milano a little over a year ago, the multiple environmental benefits offered by EarthCycle packaging made it a very easy sell.

“We had set ourselves a goal of zero waste in 2019,” says D’Amour, “and these EarthCycle trays provided a perfect starting point for us.”

“When I came on-board, I heard many customers asking us in-store whether it was possible, for example, to replace the non-recyclable trays we used for fruits, vegetables and meat,” she recalls.

“I also came across many of the same types of comments being made on the social networks.”

“We realized then that we had to change our way of doing things,” D’Amour relates, complimenting the grocer’s owners for initiating the company’s drive to embrace sustainable packaging solutions—starting with the fresh produce aisles.

“So we introduced one format, then a second immediately after, and before long our customers soon realized that we were using a new type of tray to package our fruits and vegetables,” D’Amour recalls.

“Naturally, they wanted to know the characteristics of our new trays, and when we explained to them that they were recyclable and compostable, their reactions were overwhelmingly positive.” 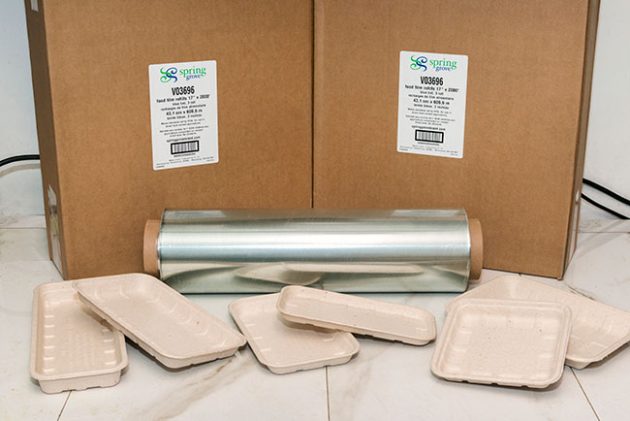 “We also made it a point to use film that could be recycled, assuming that it ends up in the right waste stream,” D’Amour says, “because we are very serious about achieving our zero waste targets.

“We have been very fortunate to be able to count on the great advice we received from Veritiv sales reps, who are continuing to guide us through our search for more sustainable packaging products.”

According to D’Amour, she is currently working close with Veritiv to introduce new sustainable packaging for the hot soups and meals that Fruiterie Milano also sells on-site from its busy deli counter.

“Our collaboration with Veritiv Canada is enabling us to launch all kinds of initiatives to meet the demands of our customers by reducing our environmental footprint,” D’Amour states.

“We are very keen on maintaining this relationship because we want to continue to innovate in grocery packaging.”

“Our interest in compostable and recyclable packaging products demonstrates how serious we are about making sustainability our core business value proposition.”

According to Veritiv Canada’s Lacasse, Fruiterie Milano’s sustainability program provides an accurate reflection of the urgency of introducing more sustainable packaging by virtually all Canadian grocery operators large and small.

“We have been carrying what would be considered sustainable packaging options for about 15 years now,” Lacasse notes, “but it is in the last two years that the demand for more environmentally-friendly packaging solutions has really taken off in a big way across the grocery sector.” 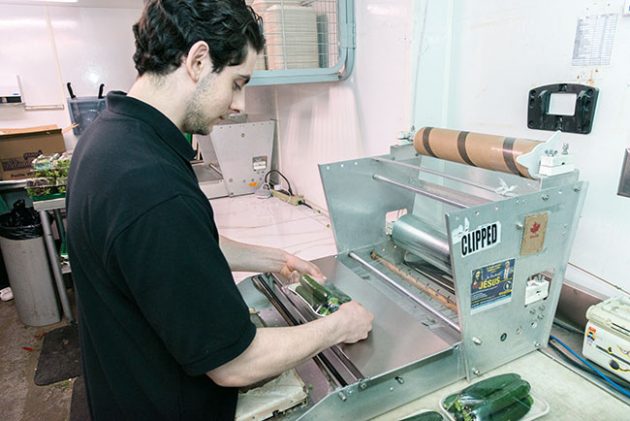 Grocery retailers have long been a significant and important customer base for Veritiv Canada, whose vast inventory comprises different packaging, printing and facility management products sourced from various suppliers.

“In the past, prospective customers would begin their inquiries with questions about price, quantities, deliveries and all the other standard purchasing questions,” he says, “whereas today sustainability either tops the list or comes very near it.”

Says Lacasse: “I think that after 15 years or so that environmental sustainability has finally become a real public issue, consumers are finally realizing how urgent and important this issue really is for all of us, and they are finally using that knowledge to put pressure on their brands and retailers to address these concerns.

“Veritiv is excited to provide innovative sustainability solutions to its customers so that we can all become better stewards of this planet,” Lacasse sums up.