Eli Gershkovitch actually had other plans for his life. After studying law he worked as an attorney and as such one of his jobs was to help secure business transactions. However, in this context less value was attached to producing a sturdy, self-made product, as he puts it.

“I wanted to be productive and make something tangible which you can see, feel and above all taste,” says Gershkovitch.

But why open a brewery? The traditions and history of beer have always fascinated Gershkovitch. He, of course, also liked to drink it. His idea soon became a concrete plan.

“I wanted to make interesting, unique products which combined centuries-old brewing traditions with new tastes and technologies,” he states.

That was back in 1995. Together with an architect he opened a pub in the historic neighborhood of Gastown with an affiliated craft brewery – one of the first in Canada.

Right from the start, Steamworks was a commercial success, the chief executive officer emphasizes. It flourished so well that the original site was soon too small.

His partner had already left the company and with Gershkovitch in full control, he and his team subsequently continued to expand their business.

And yes–he is still a lawyer and even occasionally appears to court. 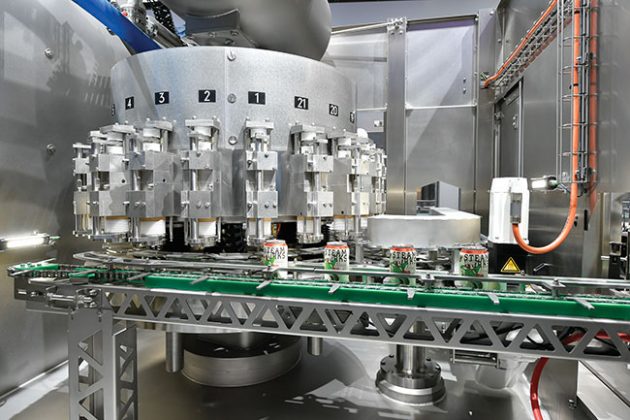 In 2013 construction began on a new brewery in Burnaby east of Vancouver with filling systems for bottles, cans and kegs.

This not only marked the start of exports to the USA and Europe, and in particular to Germany, Austria and Switzerland, but also of Steamworks’ cooperation with the Dortmund systems supplier.

“We partnered with KHS from the word go,” says Gershkovitch.

Since then, Steamworks has relied on the Innokeg KegBoy C2 kegging machine and an Innofill Glass Micro DPG bottle filler to manage its filling operations.

In order to be able to meet the growing demand for Steamworks craft beer, Gershkovitch decided to replace his old can filler.

“KHS always has been our first point of contact in this respect. “We’re extremely pleased with both the systems and the service,” says Gershkovitch with a smile.

Steamworks opted for the Innofill Can C, a can filler for small and medium-sized breweries. On the occasion of its world premiere at drinktec 2017, the Canadians made sure that they procured the very first machine with the serial number of 001.

It went into operation in February 2018, shipped to the customer as a complete machine in a single container and commissioned on site on a plug-and-produce basis without any need for complicated installation processes.

As the filler, seamer, valve manifold, cladding and control cabinet on the Innofill Can C form an enclosed, ready-to-produce machine unit, all that had to be done during installation was to connect the electricity cables, piping and conveyors.

Only 14 days lay between delivery and commissioning of the prototype. “Although ‘prototype’ isn’t actually the right word here,” claims Gershkovitch.

At the Canadian brewery the KHS teams from Waukesha in the USA and Bad Kreuznach in Germany had the system up and running at nominal capacity on the very first day of production.

According to Steamworks, it fills approximately 15,000 cans an hour in its standard 355-ml can format, with this rate lower for its other, larger can formatsholding 473- and 500-ml, respectively.

“With this can filler, KHS has made the technical innovations of its big machines available to the craft brewing segment,” says Kevin Rathbun, project manager at KHS USA. 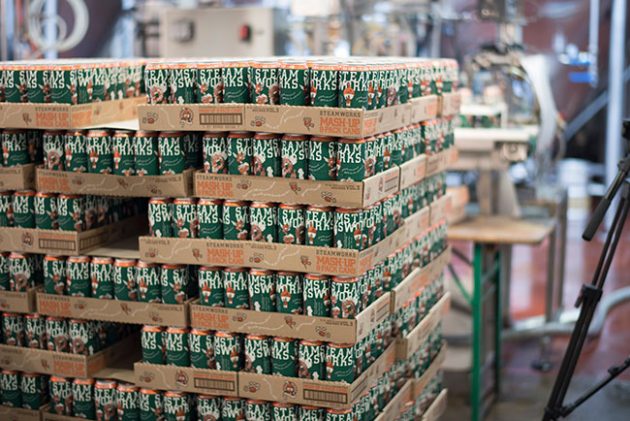 teamworks’ range of products is extremely diverse. Its various beers from Pumpkin Ale to Canadian Kölsch are filled into cans on the new Innofill Can C can filler.

Since implementing the new can filler, Gershkovitch has been very pleased with its work.

“I like the KHS approach to design. In my experience things with a logical array work best. This applies to all of our KHS machines.”

Gershkovitch is also impressed by the machine’s compact design. This is a benefit which is not to be underestimated judging by the real estate prices in Vancouver, which Gershkovitch claims are among the highest in the world.

“We have to plan well in advance and put every single square centimeter of our brewery to effective use. Compared to other fillers, the compact C series gives us the speed we need despite its smaller size.

“For ourselves and I believe most craft brewers, it’s probably the optimum solution on the market. It’s the best complete package.”

In addition to the compactness and fast installation, Gershkovitch also appreciates his new acquisition’s hygienic design.

In particular, this includes a gapless bell guide with PTFE expansion joints (Teflon) and bells, which are lifted and positioned fully electropneumatically to seal the cans – without any mechanical action from cams and rollers.

This does away with the need for water lubrication, simplifies cleaning and promises a service life which is up to twice as long as before.

KHS also uses PTFE materials in the filling valve, for example to seal the filling valve piston and in the gas membranes. Flavor carryover when changing the product to be filled is thus as good as eliminated. In combination with a fast format changeover option this is of especial interest to breweries such as Steamworks, which produce many different beers – from Pumpkin Ale to Kanadische Kölsch, for example.

“This aspect is very important to us. We’re different from a lot of other breweries in that we produce several formats and beers for various markets,” explains Gershkovitch.

Yet how has a Canadian brewery come to include the light, top-fermented beer from the German cathedral city of Cologne in its portfolio?

“I like Kölsch. We call it a ‘hybrid beer’ and of course we’re familiar with the beer’s legendary status in Cologne. We even serve the beer in the typical thin Kölsch glasses in our pub,” he says with a wink. 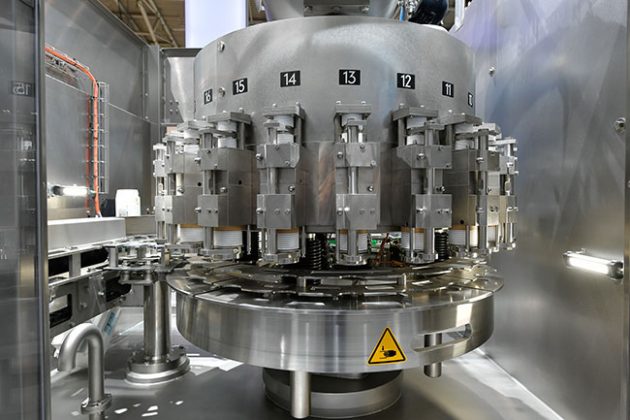 With its Innofill Can C can filler KHS has made the technical innovations of its big machines available to the craft-brewing segment. Besides the speed, precision and compact design Steamworks chief executive officer Eli Gershkovitch especially appreciates the reliability of the machine components.

Besides the speed, precision, compact design and reliability of the machine components, and especially of the valves, and KHS’ general approach to business.

“I like the KHS culture. Communication is extremely direct and deferential. The focus is on the technology and the design,” Gershkovitch extols.

Cooperation between the two companies initially began at BrauBeviale 2012. “At the time we were busy planning our new brewery and were looking to buy filling systems. I stopped at the KHS booth to admire the machines
on show there and immediately got talking to the president of KHS North America,” comments Gershkovitch.

“I explained that KHS machines actually lay outside my budget. He said, ‘take your time and if you like we can have lunch together, no strings attached.’” The machines were then not outside his budget and the rest “is history”, Gershkovitch states.

“Suffice it to say, we’ve been a customer of KHS ever since.”

The atmosphere at Steamworks is as respectful and informal as the brewery’s cooperation with KHS, says Gershkovitch. He uses the German word gemütlich—which translates to cozy—despite there now being 40 people in the brewery and 450 who work for the company as a whole.

The success story thus continues, not just for Steamworks, but also for the Innofill Can C.

“Since being exhibited at drinktec 2017 countless machines have already been sold. The interest on the international market of craft brewers and smaller breweries is huge,” says Rathbun. “Commissioning the first Innofill Can C for Steamworks has laid the foundations for the future machine series. The concept has already been endorsed by the high number of order entries.”