From Start to Finish 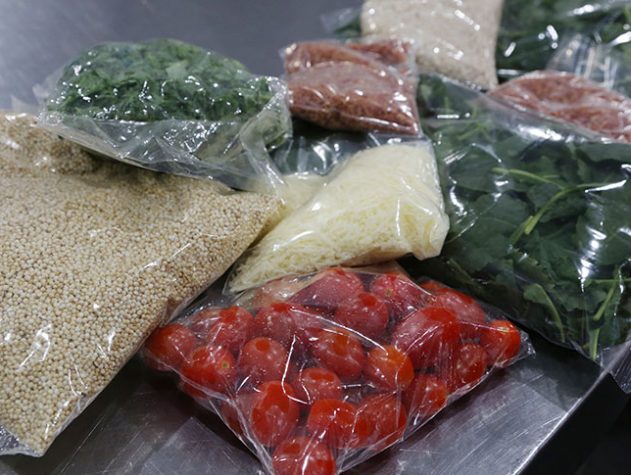 Nowadays, buying fresh and healthy natural products is at the top of many Canadian consumers’ grocery shopping lists.

And for a prominent Canadian food producer Fresh Start Foods Canada Ltd., a reputable and well-respected supplier of fresh produce for over 25 years, giving consumers exactly what they want is a natural outcome of the company’s enduring commitment to healthy eating.

“Fresh Start is proud to continue to lead consumers’ choices in line with the trend towards center of the plate becoming less protein-based and more starch- and vegetable-based,” says Fresh Start Foods vice-president Scott Lewis.

“We have been growing our offerings in this area and we expect that to continue—making certain we are on trend when it comes to the products that we sell.” 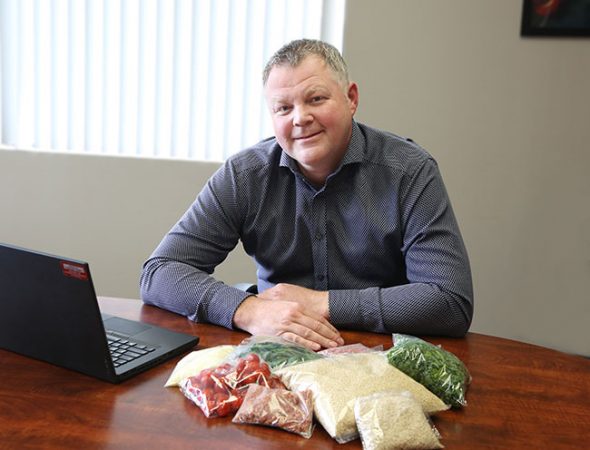 This includes J.G. Fruits and Vegetables, Montreal-based distributor of whole and fresh-cut fruit, vegetables and other related products, as well as Eating New Creations in Mississauga, Ont.

Initially started up as a catering company, Eating New Creations has evolved to grow into a full-service supplier of salad and meal assembly kits, portioned salads, sandwiches, fruit cups and other portioned fresh and dry products for clients in the retail and foodservice industries.

“We are both a manufacturer and assembler,” explains Eating New Creations operations manager Ernie Barnard.

“We do some catering style assembly when it comes to sandwiches and other high-end catering, but much of what we do is focused on co-packing products in retail formats for other companies, as well as for ourselves.”

According to Barnard, the 17,000-square-foot Mississauga facility employs about 30 people over a busy six-days-a-week schedule, with the flexibility to adjust the schedule as needed to meet any fluctuations in market demand.

Both Lewis and Barnard priding themselves as firm believers in the merits of JIT (just-in-time) production philosophy, which is rooted in the nature of the company’s products.

“We have product that has very specific shelf-life requirements,” Barnard told Canadian Packaging on a recent visit to the Mississauga facility.

According to Barnard, the first day of the working week is typically one of the busiest times for the plant, due to stocking demands of its retail chain customer.

“It’s very important for produce to have that quick turnaround because we do not have a lot of spare time,” he says.

“We don’t stock fresh items unless there is something that has a lot of shelf-life. 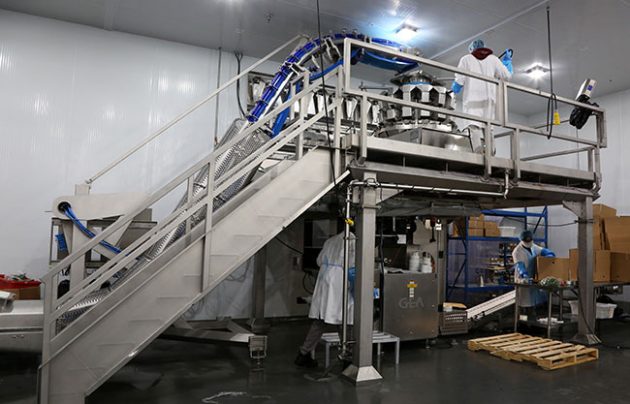 A bird’s-eye view of the S-shaped Liftvrac conveyor, which was integrated with Multipond’s J-Series multihead weigher and the GEA’s versatile SmartPacker SX400 bagging machine by Abbey Packaging to provide a seamless, high-throughput primary packaging line for the busy Mississauga facility.

To align its process with the desired quick turnaround, Fresh Start Foods recently installed an automated weighing and bagging solution from Multipond and GEA, along with the S-shaped Liftvrac conveyor purchased from the Burlington, Ont.-based packaging line specialists Abbey Packaging Equipment Ltd.

During the initial consultations for the process improvement, it was agreed that the Multipond, GEA and Liftvrac solutions offered the most flexible and sanitary solutions.

Once the process was under way, Fresh Start Foods was keen to meet Abbey Packaging representatives to discuss the merits of installing a fully automated and portion-controlled process system.

Lewis relates that prior to purchasing the Multipond, GEA and Liftvrac, much of the bagging process at the plant was done manually.

Not only was it a tedious process, according to Lewis, it also could not guarantee consistently accurate and precise portion controls.

“In the past, we might have had 20 or 30 people with scoops putting diced onions into little baggies, for example, and then hand-sealing them,” he relates.

“Now we have the Multipond Weigher integrated with the GEA SX400 SmartPacker running at about 750 bags per hour,” Lewis extols, “with only a few people required to operate it.

“In addition, working with the Liftvrac conveyor undoubtedly allowed us to be much more efficient with a much faster turnaround process.”

Setting itself apart from other conveyor systems thanks to its unique S-shape, the Liftvrac conveyor range offers a choice of available heights from 1,500-mm to 8,000-mm, achieving impressive product flow rates of up to 18 cubic meters per hour. 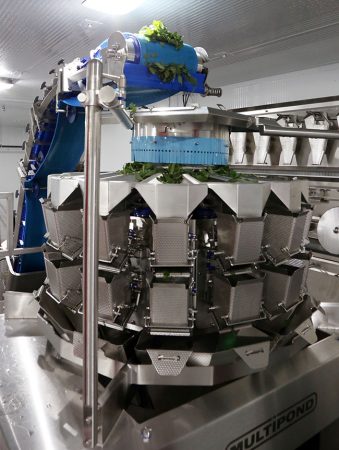 Coming off the Liftvrac elevating conveyor, the fresh produce is precision-weighed weighed and evenly dispensed into the stainless less-steel buckets of the Multipond multihead weigher.

According to Lewis, the system’s flexibility and reliability were two of the most important selection criteria for Fresh Start Foods, which places a high value on product innovation and recipe diversity.

“Innovation grows value for our customers and, in turn, their customers,” Lewis says, “and this system has enhanced the versatility of what we do as a company.

“The Liftvrac system can do anything from dry pearls of quinoa, for example, to mini potatoes, leafy greens, and diced wet product.

“That kind of versatility allows us to introduce a lot of extension to existing product lines, so that we can bring real value to our customers.”

In addition to the state-of-the-art Liftvrac, Fresh Start Foods also purchased a Multipond J-Series weigher and GEA’s model SX400 SmartPacker, with the aim of creating the most flexible and most cost-efficient way to produce their wide and product range.

The latest model in the J-Series, the highly versatile and IP69-rated and versatile Multipond weigher is able to accommodate an increased weighing system performance due to faster value logging times, which is an asset for Fresh Start Foods’ promise of JIT (just-in-time) delivery.

Before production begins, a customer will place an order with Fresh Start Foods, who will then order the raw product from their allergen-free processing facility Milton, Ont., which performs all the required washing, slicing and dicing.

Upon arriving to the Mississauga plant, the raw product is placed on the flat conveyor belt of the Liftvrac, which progressively closes into a tube that rises upwards vertically towards the multihead scales above. Upon releases the product, and the belt reverts back to its flat state, allowing the belt to be scraped clean in a continuous operation mode. This method ensures that there is virtually no product loss, compared to more conventional flighted conveyor systems.

The raw product is then weighed and evenly distributed evenly on the Multipond multihead weigher, after which the product falls down into the SX400 bagger.

With the bagger’s jaws opened to let the belt transport the film, the product is quickly bagged and sealed. 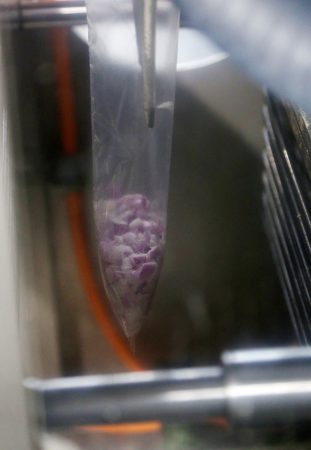 After being dispensed into the buckets of the Multipond multihead weigher, the product falls inside the GEA Smart-Packer SX400 bagger, which utilizes vacuum belts to transport the film through its open jaws to bag and seal the product at rates of up to 750 bags per hour.

The bagged product is then packed inside corrugated cases, loaded onto pallets, and sent directly to the customer via Fresh Start’s own distribution fleet.

“It’s a quick turnaround,” Barnard reiterates, “whereby we have the product delivered to the customer within 24 hours.”

With the more efficient process flow and vastly improved product consistency enabled by the Liftvrac, Lewis notes that Fresh Start Foods has been able to refine and optimize its business strategies going forward.

“The Liftvrac system has really revolutionized the way that we think about the business in general,” he states.

“Because we can now literally pack anything on that machine— from dry to frozen, to processed vegetables and leafy greens—the Liftvrac has really opened up our horizons,” he extols.

For his part, Barnard echoes Lewis’ sentiments and compliments to a tee.

“The Liftvrac is perfect for the retail niche that we have,” he says, “and the versatility of the conveyor just opened up many new possibilities in everything that we do.”

Like it is with any new machine, Fresh Start Foods faced a few minor technical issues when the Liftvrac was first installed, but they were all quickly resolved with the technical expertise and assistance provided by Abbey Packaging’s service personnel.

“Every time there is something new and innovative, there’s a certain amount of tweaking here and there, but Abbey has responded very well to all our concerns,” Barnard states. “They have pushed us through and helped us get what we need to do to get done quickly and efficiently.”

As the produce company continues to grow, Fresh Start Foods intends to continue to keep its eyes open for more machine installations that will help the company to keep progressing into the future.

And acccording to Barnard, Abbey Packaging will certainly be among the suppliers that Fresh Start Foods will seriously consider for all future machine installations.

“Abbey Packaging has a foot in the door because of this positive experience,” Barnard says. “We’re always looking for how machines can help our business and certainly

I think that the response from Abbey Packaging will put them on the list, especially if they can offer a machine that is similar to the Liftvrac in terms of impact and productivity.” 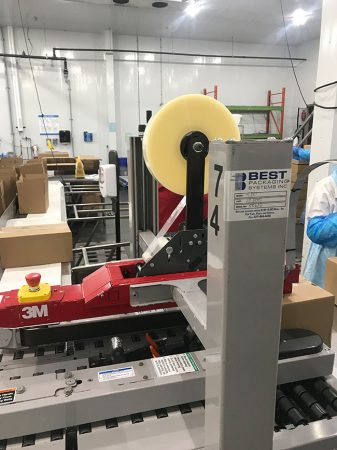 While a new machine may not be the focus for the time being, making sure that their customers are satisfied remains the top priority for Fresh Start Foods.

“These days, food safety is not just a trend––it’s a ticket to the game,” Lewis says.

“There have been too many product recalls and advisories out there in recent years,” he states, “which is why we think that ongoing investment in food safety and traceability is essential for the growth of the company.”

To make his point, Lewis points to the large sign hung up inside the plant that simply reads “The Customer is Why’ to remind employees about the importance of all of the plant’s safety and sanitation procedures.

“The customer is why we do everything we do,” Barnard concludes. “We always do everything that we can to take care of our customers’ needs.

“That’s been our focus for 25 years, and it will remain our primary focus going forward.”