Fit To A Tea

Old World tea producer using modern manufacturing and packaging technologies to keep up with the times and its growing product portfolio—April 2018, Canadian Packaging

Rexroth’s VarioFlow plus allows Yamamotoyama to move products horizontally, vertically, on incline or decline, overhead, subfloor, around obstacles and over long distances.

Family-owned and operated, Yamamotoyama was founded in Tokyo in 1690 by Kahei Yamamoto II as part of fulfilling his personal  dream of introducing green tea—at that time only accessible to the wealthy—to the general public.
According to popular folklore, he learned that steaming the tea leaves instead of brewing them, which was the accepted method at that time, resulted in a more delicious, sweet-tasting tea that retained its nutrients.
The tea quickly became an instant sensation—making Yamamotoyama a household name in Japan.
Since that time the company has expanded its operations around the globe, while staying current with modern manufacturing methods.
The company remains family-owned to this day, as it continues to specialize in manufacturing green tea and nori seaweed.
More recently, the company’s Yamamotoyama of America subsidiary was seeking to improve its production operations in Pomona, Ca., in order to achieve greater productivity and flexibility in producing multiple products.
The facility operates multiple IMA tea bag manufacturing and carton machines, each of which can produce 300 tea-bags, an equivalent of 18 full cartons of tea bags—per minute.
Once cartons are produced, the next step in the process involves packing the full tea cartons into shipper cases, after which the cases are labeled and palletized for shipment.
As management at Yamamotoyama planned to expand production, they needed to add more automated case-packers, which in turn needed to be hooked up to the tea-cartoning machines.
This required the installation of a robust carton delivery conveyor system connecting the tea cartoners to the case-packers, with the ability to organize multiple flavors to the case-packers in the proper grouping of 12 cartons per flavor.
As part of a careful review of all the available equipment options and solutions, the management of the Yamamotoyama plant contacted leading German industrial automation group Bosch Rexroth to find out what the company’s VarioFlow plus conveyors could do for their operation.
Developed for moving high-volume packaged goods and other consumer goods, such as packaged foods, pharmaceuticals and healthcare products, VarioFlow plus is a highly flexible, modular plastic chain conveyor system that can be used to move products horizontally, vertically, on incline or decline, overhead, sub-floor, around obstacles and over long distances. 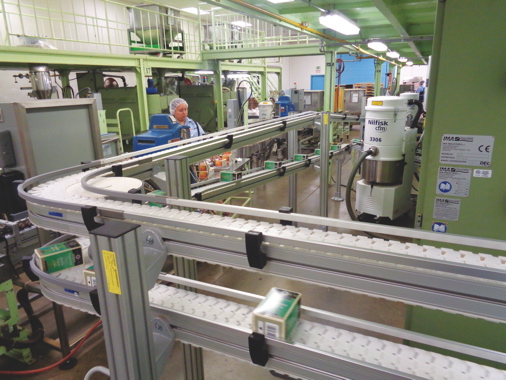 Well-suited for using workpiece pallets to convey products in applications requiring high precision and accurate positioning, VarioFlow plus is claimed to simply be the quietest, most flexible, energy-efficient and easiest-to-assemble plastic chain conveyor available in
the market, according to Bosch Rexroth.
The management team at Yamamotoyama were particularly interested in VarioFlow plus because of its smooth-running belt, low-profile channel, tight radius curve wheel, and ability to create a ‘stacked’ conveyor configuration with vertical curves, according to Yamamotoyama of America’s chief operating officer Daniel Goldstein.
“We needed the flexibility to source multiple flavors of tea product from multiple IMA cartoners into a single IMA case-packer,” Goldstein recalls.
“We researched Bosch Rexroth products, and ultimately selected Bosch Rexroth Corporation for the project based on the high quality of their products.”
Although each IMA machine can produce just one flavor of tea at any given time, the Yamamotoyama plant is strategically arranged so that the machines are located in groups—each producing 18 cartons per minute.
This meant that the conveyor system had to accommodate this volume of tea cartons per minute, and accurately merge/induct groups of 12 cartons into the case-packer, without error.
A second requirement was to protect the carton surface.
With the tea product packaged in glossy, shelfready cartons, the appearance of each carton needed to remain neat and unscratched—requiring the use of a smooth-surface conveyor belt.
The third challenge was one of space. Because of the tight spacing between different pieces of plant equipment, with minimal lateral distance between production equipment, the conveyor system needed to have a very small footprint.
To bring this arrangement to life, Santa Ana, Ca.-based systems integrator TransAutomation Technologies Inc., a member of the Bosch Rexroth Pro-Builder network, was asked to complete the design and installation of the system.
As Goldstein explains, “We needed the system to be locally supported, and were confident in the fact that the system would be built and completely integrated by the local ProBuilder, TransAutomation Technologies.”
Specifically, the mechanical design of the VarioFlow plus conveyor needed to be complemented with custom mechanical devices for controlling product groups of cartons, and further integrated with an electronic controls system. 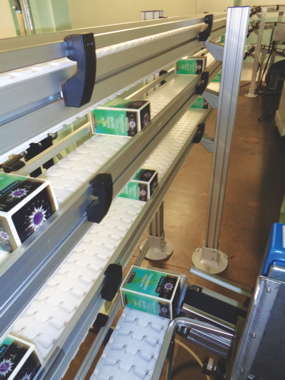 The new Yamamotoyama system receives the output of the IMA cartoners onto individual take-away conveyor runs, while the Bosch Rexroth conveyor elevations were varied through the use of vertical inclines and lateral off-sets to achieve a stacked configuration—
allowing for a very narrow footprint.
At the terminus of the system, the product travels in a vertical incline onto the trunk conveyor by using the Bosch Rexroth vertical curve declines.
Once product cartons approach the end of the Bosch Rexroth conveyors prior to the case packer, they stop and accumulate at the end of each of the conveyors.
An electronic controls system counts the cartons in queue and via a priority counting system, with the control PLC (programmable logic controller) establishing which conveyor lane is to be released onto the trunk line.
Once 12 cartons are accumulated on any given conveyor, that conveyor is cleared as ‘eligible’ to release the slug of 12 cartons onto the trunk line, with the slug release accomplished through the use of pneumatic stops, escapements and right-angle pushers.
Under this set-up, the shortest conveyor line with the least amount of accumulation capacity has the highest priority; then the second, and so on. 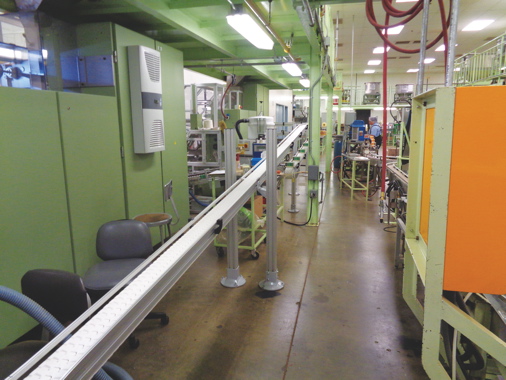 As a conveyor is signaled to release the product, a custom right-angle pusher activates and ejects the cartons, six at a time, onto the Bosch Rexroth trunk line—requiring two pusher activations to create a slug of 12 cartons, as required for the case packer.
All conveyor sections in the accumulation area are constantly monitored by the electronic controls system to keep the cycle repeating throughout the production run. Once tea cartons enter the IMA casepacker in groups of 12, two full shipper cases of six cartons each are produced and discharged from the case-packer.
The cartons are then printed and then rotated upright, to be palletized by the robotic palletizer.
According to Goldstein, the Bosch Rexroth solution has proved to be a huge success for the manufacturing facility—increasing the speed of production without damage to the products, all in a small footprint.
As Goldstein concludes, “The project went very well from start to completion.”

The above text, first published in the April 2017 issue of Packaging World, is reprinted with the permission of PMMI Media Group of PMMI, The Association for Packaging and Processing Technologies, which reserves all 2018 copyrights.