Filling in the Blanks

No one can deny these days that the world without machines and technology would be a far less comfortable and hospitable place for the vast majority of us—at home, at work, and virtually everywhere else in between.

But simply taking machines for granted as a perk of modern life is a world away from the considerable intellectual, emotional and capital investment that machine builders undertake daily in their quest to building better, faster and more efficient mousetraps to keep the wheels of industry moving forward.

Considering the great extent to which automation has transformed virtually all key CPG (consumer packaged goods) industries over the last few decades, it is often finding the right industry to put your machines to use that has become of OEMs’ (original equipment manufactures’) biggest nuts to crack these days. 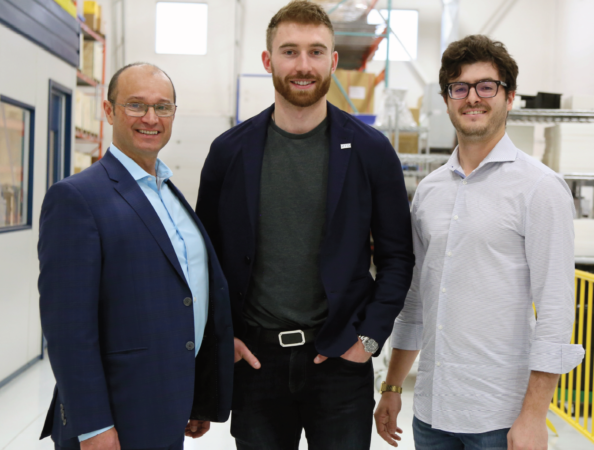 Happily for Mike Lio, founder and president of ATG Pharma Inc. in Oakville, Ont., that part of the puzzle has been largely resolved with the recent legalization of recreational and medicinal cannabis across Canada and large swaths of the U.S.—opening up lucrative opportunities in a burgeoning industry that is still very much in its infancy in terms of technological know-how and sophistication.

With over 20 years of work experience operating high-speed production lines at some of the biggest pharmaceutical production facilities in Canada, Lio’s natural thirst for knowledge and keen entrepreneurial instincts have enabled him to grow his company from a fairly ordinary provide of equipment validation and supply company for the pharmaceutical industry to into a thriving supplier of smaller-sided, benchtop pharmaceutical liquid filling and dispensing equipment to help upstart cannabis producers automate the filling of their cannabis oils, extracts, tinctures and other liquids and gels used in mainstream cannabis CBD and THC products.

Building his very first machine prototype in his home garage in 2015, Lio wasted little time in taking his home project out in the real world—determined to produce small-scale, economical filling solutions tailored to the needs of niche pharmaceutical and nutraceutical innovators for whom investing into a state-of-the-art, multimillion-dollar piece of equipment is simply economically unfeasible at their current stage of growth and evolution.

Soon after selling his very first machine to a company in Thailand, Lio proceeded to move his fledgling business into a small machine shop in nearby Burlington to commence full-time production of entry-level filling machines marketed under the ML-1 brand name—soon after expanding this manual offering to the more automated RoboCAP RL-200 and Robo-CAP RL-300 series brand names.

“These machines have done very well for us in those early years,” says Lio, “providing enough working capital to keep the business afloat and growing.” 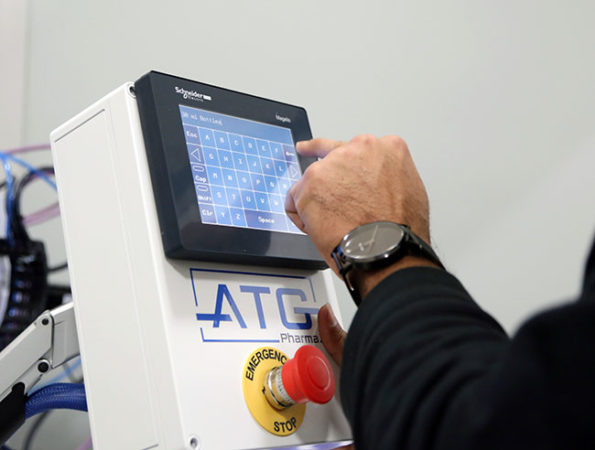 As Lio explains, both RoboCAP machine series incorporate a basic Cartesian three–axis robot to perform the filling of empty capsules, vials, cartridges, syringes bottles and other types of small containers placed inside die-cut polystyrene foam trays at speeds ranging from 4,500 to 10,000 containers per hour, depending on the type of the vessel and the dosing size.

The main difference between the two models essentially comes down to the size of the work area envelope, with the RoboCAP RL-300 machines offering 300-square-millimeter working surface area, compared to 150 square millimeters for the more rudimentary Robo-CAP RL-200 machine.

“These machines offer up to 200 programs to enable users to perform all of their basic filling functions,” Lio says. “It’s a great system for starting up, but there is not much you can do to overcome the machines’ physical boundaries and structures.

“And with us using mostly off-the-shelf components for these machines that virtually anyone else can buy, many of our competitors started copying our system designs and marketing them as their own innovations,” Lio reflects.

To overcome this unwanted imitation, Lio decided to develop a new-generation, fully-automatic liquid filling machine that would provide users the new levels and operational flexibility, versatility and process control capabilities that would still offer an attractive price-point for many startup ventures in the cannabis markets. 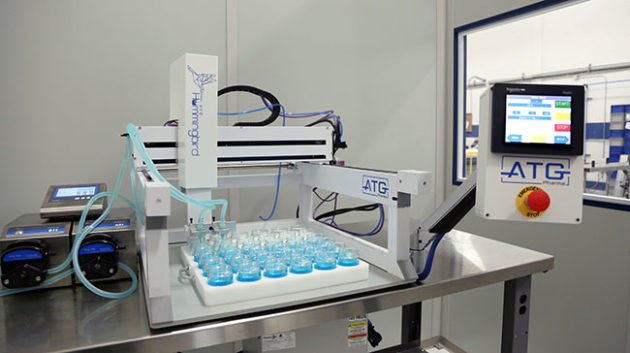 “Basically, we wanted to develop a 100-percent made-in-Canada system, but that would also give us the ability to control and customize the design of our equipment,” Lio says.

To do that, the company has recently invested nearly $700,000 in various production and fabrication machinery during the last year, overseeing the installation of a brand new AXYZ CNC router; a five-axis HAAS vertical milling center; an SK 450 automated saw/cutter built by Turkish company YILMAZ, and a Trlsibe 4010 ATC (automatic tool changer), among others.

Says Lio, “Striving to be an innovator and to stay ahead of the competition, we could only do that by incurring some senior investment costs in our machine shop in order to do all our milling in-house.

“It was important for us to become self-sufficient in all aspects of our machine-building in order to be able to provide our customers with custom-designed solutions to fit their needs,” says Lio, recalling the intense work and effort that went into designing and building the company’s first new Hummingbird series machine prototype.

“It’s a complete automation solution that will replace our RoboCAP 300 series filling machines,” Lio states, quickly complimenting some of the key Schneider Electric automation components and devices that were incorporated into the Hummingbird machine design.

“What we’re trying to do with the Hummingbird is to design a modular automated system that can go into the smaller mom-and-pop companies and, as their production grows, help repurpose those systems or even have it integrated into larger production lines,” Lio explains.

“However, you need your machine to have solid automation fundamentals to be able to that, Mio says, which is how and why ATG Pharma decided to hook up with the nearby office of industrial automation experts Schneider Electric in Mississauga, Ont.

“Because we were still limited in our knowledge of a lot of automation technology that’s out there,” Lio relates, “we really needed to partner up with a company that was an acknowledged expert in its field, to make Hummingbird the flexible machine we wanted it to be in terms of being able to change the container heights, the work area and all the other operational parameters with minimal changeover time.”

Working closely with Schneider Electric’s application design expert Dhruv Bhatt, ATG Pharma’s design team was able to pick out the best high-performance automation solution and other essential components that Schneider Electric has to offer, most notably:

* A Lexium M drive integrated stepper with linear actuator package containing 1.8° two-phase stepper motors with onboard drive electronics, and a controller with up to eight I/O connections. 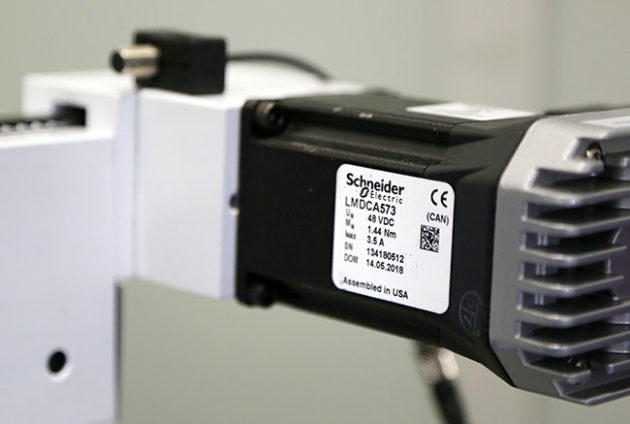 A close-up of the Schneider Electric LMDCA573 motor incorporated into the into the Lexum M inegrated linear drive package to ensure precise motion control and optimal throughput of the new Humminbird series liquid filling machine recnlty developed by ATG Pharma of Oakville, Ont.

According to Schneider Electric, the high degree of integrations of these components can greatly reduce machine complexity, size and cost in many stepper and servomotor applications, while delivering exceptional performance and smoothness with advanced current control, with feedback options including open-loop or closed-loop with a 1,000 line (4,000 counts/revolution) incremental or multi-turn absolute encoder.

As Bhatt relates, “We are proud to supply the Hummingbird machine with a complete solution from Schneider Electric that includes the PLC/HMI combo, sensors, integrated stepped motors with linear actuator, and all the essential electrical accessories.”

Lio agrees: “Dealing with a company like Schneider-Electric really helped us understand what’s out there in terms of the technology to enable a small company like ours to grow.

“There is a lot of knowledge and expertise that we don’t have, and partnering up with Schneider Electric, who sent in their people to work with our staff, has really enabled our guys to develop their automation competence levels.

“Once we had an idea what direction we wanted to go, Schneider Electric was brilliant in tying in all the technology around all the machine components and industrial control devices to help make the Hummingbird machine just as we originally envisioned it.”

In fact, Lio was so happy with the finished Hummingbird prototype machine that he had it shipped to the company’s exhibit at the recent MJBizCon marijuana business conference and cannabis export in Las Vegas last December as the star attraction.

Says Lio: “Having one machine that can do a multitude of different products under one system is quite revolutionary in the cannabis industry, which is still a bit of a Wild West in many respects.

“Most of our competitors have one system for processing one product, whereas we can do three, four or five different products like capsules tincture bottles, spray bottles, eyedropper bottles and so on.” 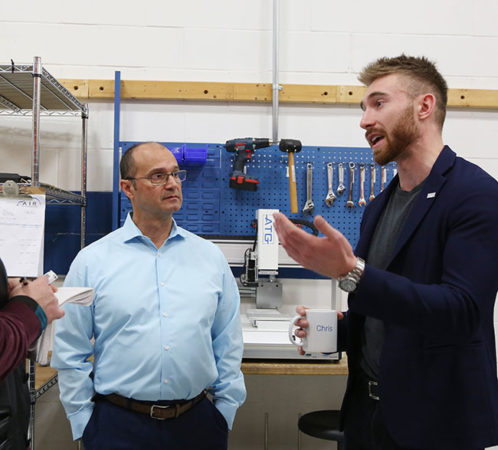 ATG Pharma founder and president Mike Lio engaged in lively conversation with the company’s vice-president of business development and sales Chris Sharanewych, who has helped the company dramatically increase its client base in both Canadian and the U.S. markets.

As Lio relates, he hopes the formal launch and commercialization of the Hummingbird system this year will continue to solidify the marketplace success already achieved by his company, which now employs 23 full-time personnel.

“We have already outgrown our current facility and are now looking for a bigger plant to build our machines, whether leased or owned outright,” he says, citing hundreds of ATG Pharma machine installations across Canada and beyond.

“We have gone from producing about machine per month a couple of years ago to shipping four to five machines per week nowadays,” he states, adding that the growing cannabis industry accounts for the lion’s share of those installations.

“I think that we’re now the Number One supplier of liquid filling machines in the Canadian cannabis market,” Lio states, saying the company is currently projected to hit a $10-million benchmark in annual sales with the next couple of years.

“Having decided a couple of years ago that the cannabis market would be our bread-and-butter industry, we are more determined than ever to maintain our culture of innovation by looking ahead to where the market is going and to fulfill its emerging needs,” Lio states. 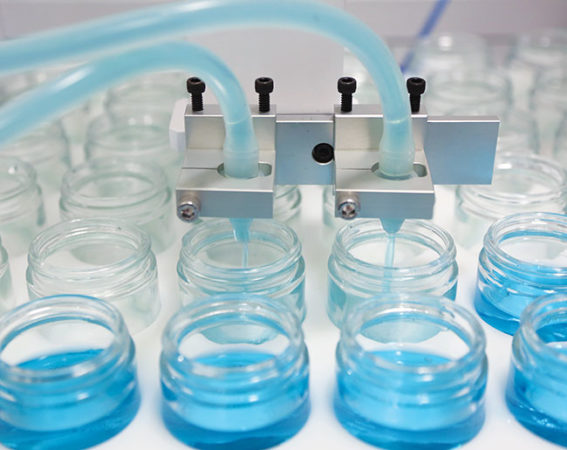 “We are finding out what that the cannabis market is becoming a lot more like a mainstream CPG industry, with a lot more creams, beverages and liquid food products that need to be packed in a greater variety of bottle sizes and shapes,” he says, “and we are eager to seize on these new opportunities with our new Hummingbird machine range.

“And with the wonderful partnership we have developed with Schneider Electric,” he concludes, “we are confident of staying ahead of the game in terms of technology, customer service and continued innovation.”