Chips off the old block

Since its humble beginning in 1957, potato chips manufacturer Zweifel Pomy-Chips AG has worked tirelessly to create a name for itself as one of the most prominent and trusted snack-food brands in Switzerland.

Based in Spreitenbach, a short drive outside of Zurich, the company’s production plant employs about 400 people to produce a popular range of high-quality potato chips comprising the Original, Chilli Paprika, Spicy Tomato and Salt & Vinegar flavor varieties.

This production takes place over a 200-meter-long production line stretching over two floors of a building filled with and an ever-present aroma of fried potatoes wafting through the air, created by the average of five tonnes of potatoes processed each hour to make and package the product.

Currently in the process of modernizing nine of its packaging lines, Zweifel boasts extensive in-house knowledge and experience in developing and integrating its production equipment and the plant programming associated with running this equipment.

A few years ago, however, after putting out a tender for some new packaging and conveying equipment, the chip producer found itself in need of some specialized knowledge that would enhance the overall safety of its working environment throughout the plant in a consistent and highly reliable way, as specified by the European Union’s Machinery Directive 2006/42/EC standard.

As the central component in the new packaging line, the automation system PSS 4000 for safety and automation closely monitors all of the safety-related functions at Zweifel Pomy-Chips AG.

Specifically, the interconnection between the individual plant sections mean that the interfaces and logic connections of the E-STOP functions had to be assessed and transferred into one overall case of compliance with the directive, which mandates that all working machines must be deployed in such a way that man and the environment are sufficiently protected from harm.

With Switzerland agreeing to comply with this directive via several bilateral trade agreements, the manufacturers and marketers of such machinery must provide binding give binding confirmation that their plant meets the minimum safety requirements in through a formal declaration of compliance.

In light of the large number of standards to be considered for such a declaration, being on the safe side required some well-versed specialized expertise in the area of industrial safety.

“It was clear to us that we needed support from a competent partner,” says Gerhard Meier, Zweifel’s team leader of technical services who turned to safety automation specialists Pilz GmbH & Co., to implement the process.

“As we have enjoyed a long-standing partnership with Pilz, we were aware of their expertise in matters regarding risk assessment and development of reliable safety concepts, right through to CE marking”, says Meier.

Based in Ostifildern, Germany, Pilz worked closely with Zweifel to help produce an efficient safety-related control concept, which involved the development of mechanical, electrical and other technical engineering solutions for machine safety, while accounting for all the key considerations of machine availability and productivity.

In this operation, special conveyor grooves are used transport the baked chips to the new packaging lines, where a pneumatically controlled flap opens up to allow the chips to access the fully-automatic packaging machines, where the chips are sealed in bags in brisk and orderly fashion and packed in standard transport cartons to start making their way to the market.

The chips metaphorically fell into place when Pilz introduced Zweifel to their perfect match—namely the PSS 4000 automation system. 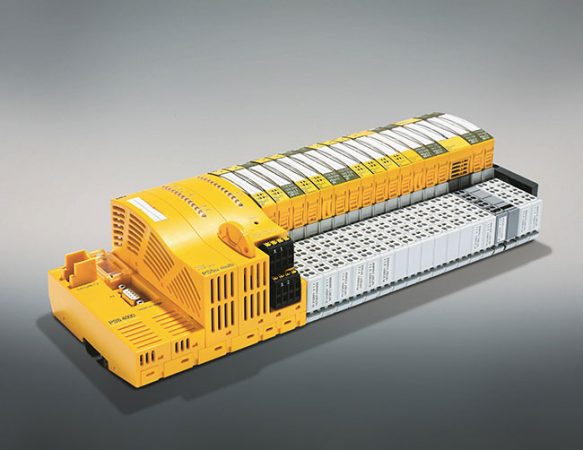 A centralized standard automation control system monitors the machine and processes all the signals, while the automation system PSS 4000 allows for the consistent distribution of various control functions at a time.

“We had been following the development and launch of the PSS 4000 automation system with interest for some time,” says Meier, noting that Zweifel had previously used Pilz’s PNOZmulti configurable control system with considerable success.

But as the plant became bigger and the production requirements more complex, the case for upgrading to a more efficient modular system such as the PSS 4000 automation system—offering the option of combining and merging safety with automation—became more compelling.

“Following an internal cost and benefit analysis of both systems, we came to the conclusion that it was the right time to use the PSS 4000,” says Meier.

As the central component in the new packaging line, the PSS 4000 automation system monitors all the safety-related functions such as the packaging line and safety gates via an advanced intelligent access concept.

The gates are fitted with PSENmag magnetic safety switches and the coded PSENcode safety switches from Pilz. The latter is then used to monitor the position of guards in accordance with the EN 60947-5-3 standard, and also for simple position monitoring.

The pneumatic cylinders are thoroughly monitored. In order to avoid an increased risk of injury to the operators, the flaps must be safely locked during the cleaning process.

The E-STOP pushbuttons positioned along the packaging line are monitored using the automation system. The company attached great importance to the formation of four autonomous safety circuits, as it must be possible to clean one section of the plant without entirely halting the whole plant production process in its entirety.

According to Pilz, the PSS 4000 automation system is designed to allow for optimal interaction between hardware and software components, network devices and the real-time Ethernet—thereby enabling a wide range of projects to be implemented more easily and with greater flexibility than with conventional solutions.

Rather than having a centralized control system, a modular user program is made available within a centralized project, which allows for standardized and simple handling.

With its ability to undertake safety and automation tasks, the automation system has already proven itself in numerous applications in the widest range of industry sectors, according to Pilz.

After reviewing the PSS 4000 automation system and learning how it functions and operates, the decision to employ it was a no-brainer for Zweifel.

A pneumatically controlled flap opens up when the machine is in operation, allowing the different kinds of chips to access the fully automatic packaging machines prior to being packaged.

“When selecting the PSS 4000 automation system, the deciding factors for us were the simplicity, the drastically reduced cabling work, clear communication, clear responsibilities and, ultimately, the excellent price-performance ratio,” Meier states.

Meier adds another factoring decision in choosing the automation system was the ability of the PAS4000 software platform and its Graphics Editor functionality to link into the existing structure of the PNOZmulti Configurator, meaning that the parameter setting remains transparent and simple into the future.

Since implementing the PSS 4000 automation system, the working relationship between Zweifel and Pilz has been smooth sailing, as the partnership has resulted in excellent prospects for other future prospects for the chip manufacturing company.

“As usual, our collaboration with Pilz was conducted in the full spirit of partnership,” Meier concludes.

“Pilz not only supplied us with outstanding products, but also provided competent support in word and deed before, during and after commissioning.”


Related Stories
New operating and monitoring product range
Pilz Canada partners with Jacmar
Pilz is a world market leader—and it has proof
Packaging and Safety: How You Can Protect Employees