Royal Containers president and chief executive officer Kim Nelson is a 16-time Ironman competition finisher and an Olympic-style weightlifter who has headed the company since 2009.

Royal Containers Ltd. is a far stretch from your ordinary pair of corrugated sheet plants. Employing a total of 245 people at its two Ontario locations in Brampton and London, the company runs
between 40 and 45 million square feet of corrugated board per month to supply its loyal customer base, which the family-owned and operated business keeps happy with stellar customer service and impeccable product quality.
As company president and chief executive officer Kim Nelson explains, “We really believe in having strong values and a focus on relationships—not just within the company, but especially with our numerous customers and suppliers.
“Some might just call it service, but really it’s about becoming the employer and supplier of choice,” Nelson points out. “We have always believed in taking relationships one step further to allows us to build solid partnerships with our employees, customers and suppliers.”
“So that when they call in, our customers have a relationship with the woman that answers the phone, the designers, people in our shipping department, many of our truck drivers … even many of our machine operators are known to them by name,” she relates.
“There’s a high degree of built-in loyalty and trust in this, which helps attain a certain level of ‘stickiness’ between us and our customers, Nelson adds.
“Because our customers and employees are on a first-name basis, they are less likely to want to shop around.”
The company know today as Royal Container was formed in the late 1970s by Ross Nelson, who found his entrepreneurial calling after working in design and sales at two leading integrated companies.

The 100,000-square-foot Royal Containers plant in Brampton houses an assortment of high-performance BOBST converting equipment operating at optimal efficiency levels to help the company meet its production targets, along with comprehensive design and printing services.

After first striking a business partnership with the independent Central Box & Containers, Nelson sold his stake in the company, purchased a few pieces of basic equipment and went on to start up Norbram Packaging.
After acquiring two other local independent sheet producers, Rowland Packaging and Tri-County Containers, Royal Containers entered the market under its current moniker.
In the true Canadian-style spirit of friendly competition, independent producers serving the Ontario market are for the most part uniquely co-operative in their approach to business, with strategic partnerships being fairly commonplace.
In 1993, this enabled several local sheet plants to partner up in the formation of TenCorr, which according to Royal was North America’s first-ever jointly-owned sheet feeder operation. The venture’s first corrugator was installed in Toronto, with additional locations subsequently opened up in Mississauga and Brampton.
Around that time, Royal Containers and TenCorr became the first sheet feeder operations to invest in partial ownership of a paper mill.
After acquiring and then selling its shares in Solvay Paperboard, Royal had the good fortune to invest in Cascades’ state-of-the-art Greenpac Mill in Niagara Falls, N.Y., manufacturer of 100-percent recycled linerboard.
These supply chain partnerships with sheet feeders and a paper mill formed a new vertical integration model that has provided Royal Containers with closer control over its own reliable source of paper and board.
In 2009, Royal made one of its larger acquisitions with the purchase of Morphy Containers Ltd.—just around the time that Kim Nelson was named Royal Container’s chief executive officer.
In much the same way that the company is well above average, so is its leadership.

By any measure Kim Nelson is not your typical box plant chief executive officer. For one, she is a 16-time Ironman competition finisher and an Olympic-style weightlifter.
An avid athlete and a mother of three young children, she is also a past chair and the current overseas director of leading industry group AICC-The Independent Packaging Association.
Despite all these extra-curricular and outside activities, Nelson remains firmly focused on her day job of heading a highly successful, vertically-oriented corrugated operation.
For all the hallmarks of a family corporate culture, Royal Containers is very much a productivity-focused company, with efficiency a central goal of all its activities.
While its is capable of producing high-graphics work with its strong and talented design team, “We are more of a brown-box operation,” states Nelson.
“We try to achieve our operational goal by driving efficiency at every stage and remaining very focused on performance indicators.
“We like to set goals for ourselves: the business is driven by a leadership group always focused on those specific goals,” she explains.
“We have a very clear strategic plan every year posted openly everywhere in our building, so that anyone coming in here can immediately see where we are headed and what our goals are,” she says.
“It’s just a single page, but it’s a page that shows everything we do and every decision we make,” says Nelson.
“From the guy who’s running a flexo press to the young woman who’s answering the phone, everyone knows how they contribute to the goals and can ensure that their decisions are in alignment with those goals,” she proclaims.
“I believe that sheer focus is how we consistently achieve our goals.”
According to Nelson, the company has been able to achieve its year-to-year growth targets in large part to its nearly-exclusive use of production and converting equipment manufactured by leading machine builder Bobst North America Inc., including four BOBST-made FFG (folder flexo gluer) machines.
“We have everything from the smallest-capacity on up,” Nelson reveals, citing the BOBST model 618, 924, 1228 and 1636 FFGs employed at the plants.
“That’s one of each, in almost every size that Bobst makes,” she points out. “They’re all three-color, except for the four-color mini model, and we also have a three-color BOBST DRO rotary die-cutter in London.” 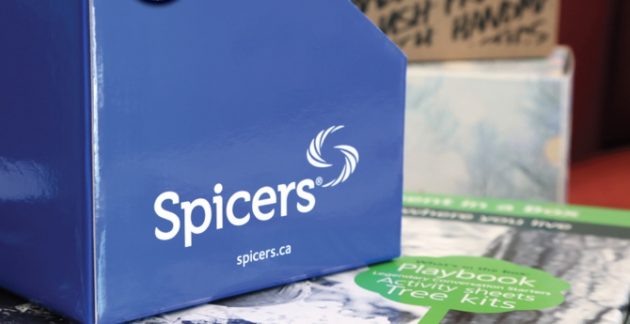 Nelson points out that Royal is currently in the process of adding a new BOBST pre-feeder and fully-automatic PAL pallet takeaway palletizer system to both the 924 and the 1228 units, which should be completed within the next few months.
“The decision to add these and other equipment was driven by existing customer needs,” she explains.
“We must continuously drive to achieve greater throughput.
“We are close to capacity in Brampton and soon to be out of space in London,” she relates, “so in order to increase our throughput by 30 per cent and achieve all our goals for this year, we are adding the full-line 924 FFG machine.”
Because Royal Containers maintains virtually zero standing inventory, matching throughput with customer demand is critically important, according to Nelson, as well as upgrading the plants’ equipment on a consistent basis.
“About every two years we buy whatever’s out there that is more technically advanced and more efficient,” she says.
“We’ve always had flexos, so we always keep ourselves competitive by buying the newest, fastest and most advanced flexos.
“Our way of thinking is it’s driven by our customers’ needs.”
Nelson credits BOBST as being “a perfect match for Royal Containers because they are to us exactly what we are to our customers.
“They are important to us and a big part of our success,” she states. “It’s more than just having a knowledgeable sales rep, of course, even though that is in fact the case.
“We’ve enjoyed our relationship with BOBST for many years, and the loyalty that comes with it,” she says, describing BOBST equipment as “the Cadillac of our industry, despite some really good competition out there for them.”
Says Nelson: “We appreciate the relationship because it is mutual and authentic: We know that they’re important to our rep.
“With the quality and depth of our relationship, it’s more important than ever that they’re never more than a phone call away.
“All our relationships run deep,” says Nelson. “Operators, supervisors, plant managers, designers … everyone is relying on each other when it comes to maintenance and service.” 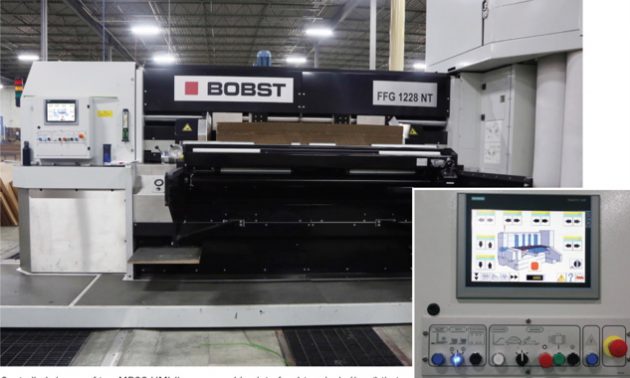 Controlled via one of two MPC3 HMI (human-machine interface) terminals (inset) that enable just two machine operators control of the entire production run, the user-friendly BOBST 1228 NT flexo folder-gluer can process all common corrugated board grades and flute types to make a broad assortment of attractive containerboard and display packaging for all types of consumer goods and industrial products.

Nelson says Royal Containers continually benefits from BOBST’s proactive input and suggestions on optimizing its equipment at the plant.
“They can be brutally honest with us: in fact, they have helped us to change our production culture.
“For example, although we’ve been running a flexo the same way for 20 years, they came in and challenged us, telling us we had a problem because so-and-so on the first shift and so-and-so on the third shift were not running the way they were supposed to.”
As far as Nelson is concerned, there is no such thing as too much co-operation, which applies to Royal staff as well as to outside suppliers.
“Early on, as well as throughout the process, we’ll sit down face-to-face with our production management to help identify problems and provide suggestions and solutions,” Nelson relates.
“They’ll also sit down with the supervisors and the operators until everyone is on-board.
“They don’t leave until they have helped us improve our processes,” Nelson explains, citing the importance of quantifying and verifying the impact of all process changes and improvements.
“To meet our goals of constantly increasing productivity, everything is measured,” she states.
“And this also ties perfectly into the help and support that Bobst provides us at this stage.
“They align perfectly with our goals because they share these goals themselves,” says Nelson, adding she feels “very optimistic” about what Royal Containers can achieve in coming years with its dedicated staff, top-of-the-line production equipment, and exceptional machinery suppliers such as Bobst.
“Two years ago, Royal’s year over year growth was eight per cent; last year it was 17 per cent; and we are looking for somewhere in the 12- to 13-percent range this year,”she relates. “And that’s just doing more of what we’re already doing.
“I am still looking for acquisitions,” she notes, “but our growth numbers for this year do not include increases due to acquisition.
“That said, I know that we are going to continue to grow and we are going to continue to acquire other independent companies,” Nelson states.
“It is really important for us to be aware that to stay in the game we need to compete,” she concludes.
“Combined with our unwavering core values and our focus on relationships and partnerships, we really believe we will continue to succeed: it is what drives us all.”