One of the effects of the coronarvirus pandemic is that consumer behaviour in terms of buying and consuming goods has changed in line with restricted supplies and access to retail sites. Alongside this, typical trends in on-the-go purchases have evaporated, none more so than in beverage consumption. PET resin is the most commonly used resin to package bottled water and soft drinks as well as food products, although usage in other areas is also growing due to its superior recyclability.

PET resin demand typically exhibits seasonal patterns. In Q2 as temperatures begin to rise and the European holiday season begins, the demand for PET resin increases. Bottled water and soft drink sales increase in line with warm, dry weather and convertors will stock up on resin ahead of the expected peak in sales. Demand is often weakest in Q1 when temperatures are at their lowest and the demand from the festive period wanes.

The warmest months in Europe, usually June to August, represent the school holiday season in the region. Millions of tourists migrate from their home nations in the north of Europe to the southern countries of the Mediterranean in search of higher temperatures and sunnier beaches. Traditionally these three months account for over 43% of the overnight tourist stays that occur annually in Europe1. For the full year in 2019 there were 1.5 bn overnight stays in tourist accommodation in Europe from non-residents of the destination country. This number would have been expected to remain similar if not grow in 2020, especially given the warmer weather the region is experiencing.

PET resin demand generated by tourism is not insignificant in Europe; bottled water, soft drinks and packaged foods are goods which are purchased frequently whilst on holiday. A European Commission public consultation uncovered that Europeans often

feel insecure about the quality of tap water when abroad. Only 20%2 of respondents stated they felt comfortable drinking tap water outside of their home country. With water an essential, it is evident that bottled drinks take precedence over the tap when abroad.

A typical year in the PET resin market is a rarity; 2018 was hampered by feedstock production issues causing the domestic price to spike. In 2019, in retaliation to high European prices, an abundance of cheap Asian imports was delivered in Q1. Many buyers’ inventories were high and demand for domestic material was lacking, with many producers forced to reduce operating rates. 2020 is guaranteed to be a turbulent year for most markets and PET resin is not exempt.

Q1 trade flows into Europe are already indicative of the disruption caused by the coronavirus pandemic. Exports from Asia into Europe are far below those of 2019. This cannot be solely attributed to logistics and shipping disruption in Asia but also the fact that the price spread over Asian PET resin has continued to reduce over the last 12 months. Although virgin PET resin prices remain at all time lows it does appear that European producers are seeing some positive repercussions as demand returns for domestic production as buyers look to shorten their supply chains, removing a degree of uncertainty in this volatile market.

Lockdowns were widely implemented across Europe in March as the coronavirus pandemic worsened. The initial implication for PET resin was a spike in demand as populations stocked up on food, beverages and household products. PET resin price initially remained afloat against a backdrop of crashing crude oil and plummeting feedstock costs.

By April lockdowns and restrictions remained in place for the majority of Europe and the demand for PET resin had dampened. Populations were restricted, not only to their country of residence but their own homes. The growth in tourism which had seen a positive start to the year had halted. Countries closed their borders and enforced quarantine became a reality for any border crossings. The price decline in the feedstocks and the weakened downstream demand now filtered into the European PET resin price.

The impact that the coronavirus pandemic will have on tourism is yet to be fully realised. The 2020 tourism season ended before it began. Spain a popular tourist destination saw a decline of almost 60% in March vs 2019 in the nights spent in Spanish tourist accommodation. These figures count the occupancy of tourist accommodation establishments (such as hotels, apartments and other short stay accommodation) from non-residents. 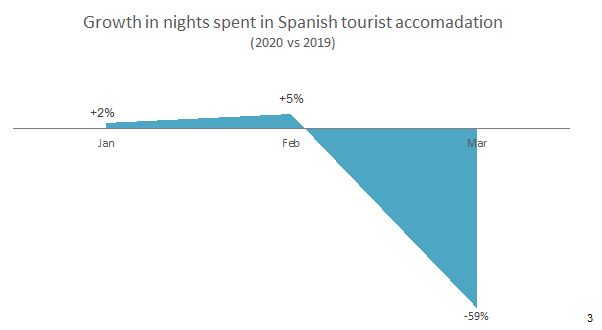 Out of home purchases of water and soft drinks occur daily when travelling. Consumption increases as temperatures rise. Popular tourist destinations will see substantial uplift in sales over the summer period as both temperature and consequently footfall in the areas increase. This in turn increases the demand for PET resin. Declines in out-of-home purchases are already affecting major brands. Britvic, a British soft drinks producer, saw the out of home channel volume sales in Great Britain decline by -57% in April vs 2019. This was partially offset by +12% growth in the at home channel.

With tourism being significantly reduced since mid-March it is almost inevitable that there will be no ‘normal’ holiday season in 2020. PET resin demand is expected to be reduced year on year in tourist heavy areas in 2020.

The effect that the coronavirus pandemic is having on the European airline industry is also severe. With governments restricting movement, airlines have almost no demand for their services. In March 58% of commercial flights in Europe flew versus 2019. By April, European airspace was virtually at a standstill with only 5% of commercial flights in Europe flying. The skies remained almost empty in May, the absolute number of flights increasing slightly but still a fraction of the number seen in 2019. 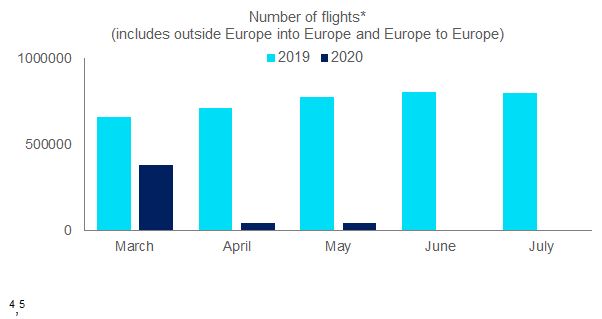 2020 had started off positively for the tourism industry in Europe. January and February numbers showed a 4% growth year-on-year in the nights stayed in tourist accommodation by non-residents. As the coronavirus pandemic worsened, all non-essential travel across Europe stopped. With limited travel options and most populations being encouraged to stay home, the tourism industry was expected to suffer an extraordinary decline in numbers.

The assumption that that the change in flights is directly proportional to the change in nights spent in tourist accommodation will be used as a basis to estimate 2020 tourism numbers. Three scenarios will be considered. Scenario 1 assumes flight travel and hence tourism will return to 60% of that in 2019 by December. Scenario 2 is more optimistic and 75% of air travel and tourism is expected to have returned by December and scenario 3 assumes that flight numbers and tourism returns to pre-coronavirus levels by October 2020. 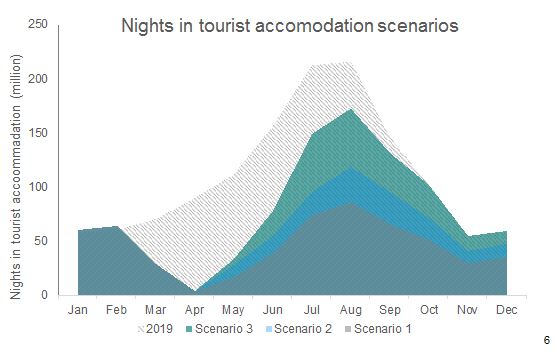 It was assumed that an individual who has stayed a night in tourist accommodation has consumed three PET packaged beverages per day:

The overall quantity estimated may not be hugely significant, but the location of the demand is expected to be. Countries that typically see a substantial rise in tourism may lose out on beverage sales and hence PET resin demand. On the other hand, countries with populations that tend to leave their country of residence to holiday may well gain demand share back as many are forced to experience a staycation. 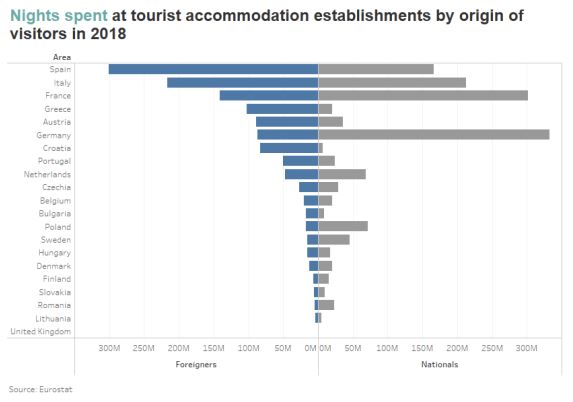 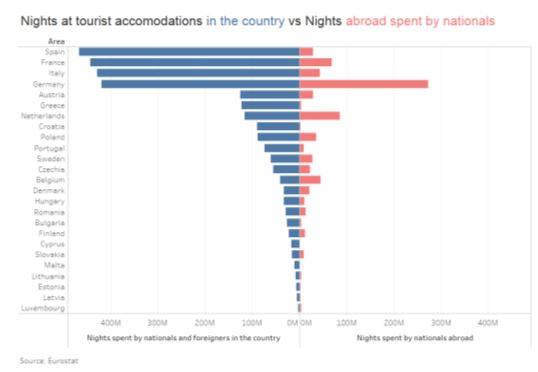 Countries that can expect to see some sizeable demand return as holidays are taken in the home country as opposed to outside their borders include the Netherlands, Germany, Belgium and Denmark. In contrast the countries which usually attract substantial foreign tourism, and will not in 2020 include predictably Spain, Italy,

Greece, Portugal, Croatia and Malta. Demand for PET resin in these countries is expected to decline versus 2019.

These demand trends for virgin PET resin impact the R-PET market in terms of supply. Any decline in beverage consumption is a reduction in bottles available for collection. Clearly this analysis shows a displacement of demand greater than reduction, as staycations result in elevated domestic consumption. This suggests that those countries which operate collection systems that typically produce the highest collection rates will increase the volumes collected, such as Germany and those with deposit return schemes.

Overall, this analysis does not suggest growth in consumption at a time when R-PET users are striving towards sustainability pledges and the supply chain needs higher growth in the regions’ recovery rate. In 2018 the recovery rate of PET bottles in Europe was 63% from the ICIS annual study of the R-PET industry, and the expected growth rate over 2020/2021 was around 3% per year. However, ICIS analysis shows that in order to meet the recovery targets of the Single Use Plastics (SUP) Directive the required growth rate in recovery is double this at up to 7% per year. Collection and sorting are not only the first stage of the recycling chain but the most critical. Without the necessary quantity and quality of bales, or feedstock, the supply chain cannot produce the R-PET product required to meet the high level of demand now and in the future.

Susan Mair is the Petrochemical Analyst for ICIS.