The paperboard manufacturing industry has always been a keenly competitive sector made up of ambitious companies playing with razor-thin margins—requiring meticulous attention to detail and ever-changing customer expectations to ensure long-term success—especially in these challenging economic times.
Fortunately for the family-owned Ingersoll Paper Box Co., Limited of Ingersoll, Ont., such harsh realities of life are nothing new.
Since starting out back in 1922 under the Ingersoll Cone and Box banner as a niche producer of ice- cream cones and boxes, the company has managed to keep earning its special place in the  Canadian folding- carton industry for nearly 90 years through unwavering commitment to top-class customer service, high product quality, and a long-nurtured competence in short-run production, according to the company’s managing director Sarah Skinner, the granddaughter of company founder Robert Skinner. 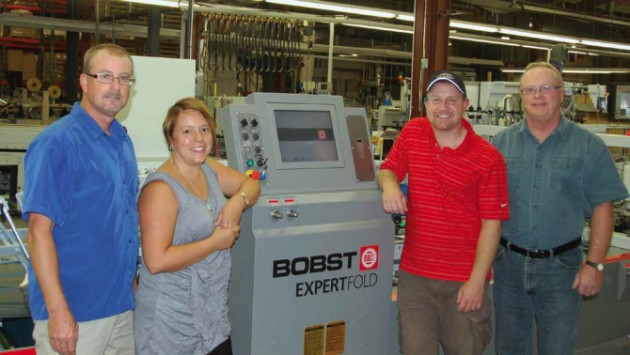 “We currently manufacture and sell only folding cartons,” says Skinner, explaining that the original ice-cream box business was sold off in the 1930s.
“But in January of 2011 we began manufacturing our own corrugated boxes for our own shipping purposes, and we plan on developing that into a separate business in 2012,” Skinner told Canadian Packaging on a recent visit to the 85,000-square- foot facility employing 70 people to produce a diverse array of straightline boxes such as reverse tuck, straight tuck and universal bottom; automatic bottoms also known as crashlock; four- and six-corner boxes; and blister cards.
In addition, Ingersoll offers a comprehensive array of services such as computer-aided design (CAD), printing, embossing, folding and die-cutting, relates Skinner, to serve a diverse customer base in the automotive, food, healthcare and pharmaceutical industries—offering flexible production runs from as small as a few thousand pieces to multiple millions of cartons.
“Our North American customer base has been built around the concept of service,” states Skinner. “We give the ultimate in customer service, but we also demand the same from all of our suppliers.
“Being a smaller-sized company without a lot of hierarchy and bureaucratic red tape, we have the ability to make the quick decisions and the skill to provide the customer with whatever they require and when they require it,” says Skinner, adding that superior customer service is vital in an industry where there is always someone willing to promise to do a job cheaper.
Says Skinner: “If you know what you are doing and can do it right every time, one-time customers quickly become return customers, as we know that this type of service capability goes a long way in making us who we are.”

An Ingersoll Paper Box employee preforms a routine maintenance check on the company’s new Bobst Expertfold 110 A-2 folder-gluer, said to be the only one of its kind in North America to also run a Braille application system.

Asked to explain the company’s impressive longevity, Skinner is quick to give credit to her dedicated employees.
“They really are a great bunch of people,” she states. “We have a large number of long-term  employees who all take their job very seriously: We all have the same goals when we come to work, and we all want to make sure that the customers receive exactly what they are asking for and more.”
Naturally, maintaining those exceptional services and constantly improving the quality of the final product requires continual investment in advanced boxmaking and converting technologies, and Skinner has no hesitation in procuring new machines and technologies from big-name industry leaders such as the Bobst Group, headquartered in Switzerland.
Just this past May, the Ingersoll Paper Box plant installed a new Bobst Expertfold 110 A-2 high-speed folder-gluer that Skinner says replaced some older antiquated equipment, while significantly increasing throughput capacity.
Because the plant already had two other Bobst gluers operating in the same department, there was a minimal learning curve and production slow- down due to the arrival of new equipment.
“The Experfold was set up and running by Bobst within a week, and our guys on the shop-floor had no problems learning the new features of this machine,” Skinner recalls.
“The Bobst trainers really know what they are doing, and they were very easy to get along with.” To optimize the new folder-gluer’s performance, the company also purchased a Bobst Handypack GT semi-automatic collection table for collecting and packing cartons, along with a VCX Gluing and Quality Assurance glue system option from Valco Melton—ensuring optimal quality control for the glue patterns and application of the Resicol X-697 Blue adhesives supplied by Halltech Inc. 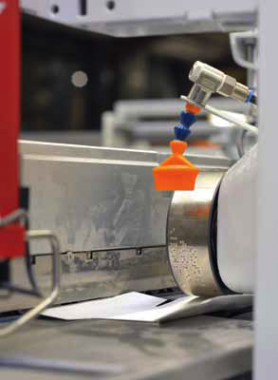 “The machine has notably reduced our initial set-up times, while allowing us to run at a significantly faster speed,” Skinner reveals. “We know that customers are always going to request shorter and shorter turnaround times, and using the Expertfold allows ourselves the time we need to meet their demands.”
One of the new folder-gluer’s more exciting capabilities, according to Skinner, is its unique Bobst AccuBraille application system for generating on- package information that can be read by the visually- challenged consumers, along with a special Braille verification system that is claimed to the only one of its kind currently operating in North America.
To create the Braille messaging on the cartons, a metal band with raised nodules is added to the Expertfold to apply pressure to the metal band as each paperboard carton passes by.
According to Skinner, it is easy to set up and it provides reliable, cost-effective Braille dot definition over the entire length of the run.
After each carton has the Braille messaging applied to it, a Valco Melton CaptorT system uses high-speed CCD (charged-coupled device) camera technology and custom lighting to produce over 10,000 images per second of the carton area.
Utilizing sophisticated image analysis algorithms, the system’s software evaluates the entire image and identifies any specific failures such as a faulty carton, incorrect Braille, or insufficient adhesive. 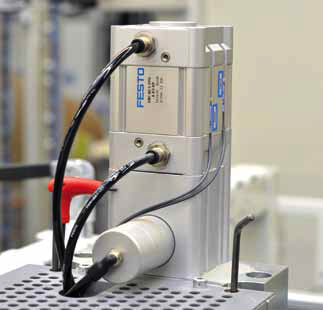 Festo pneumatics are utilized to press paperboard packaging up against the AccuBraille application system.

In addition, Valco Melton’s OT-120 control package is a touchscreen data entry system that uses simple pictograms and market-specific program symbols for very fast set-up and changeover on the Expertfold machine, according to Skinner.
“I would say that purchasing the new Bobst Expertfold with the inline Braille application and verification system has been our latest and biggest innovation to date,” states Skinner, saying several of the company’s important pharmaceutical clients have provided glowing feedback on the high-quality Braille codes produced with the new technology.
“The old way of applying Braille to packaging has been completely revamped with the Expertfold folder-gluer,” Skinner extols. “Until we purchased this system, we had been performing this function via one of our Bobst die-cutters.
“But because of the high tooling costs involved in applying Braille that way, we were looking for an alternative solution, and we were happy to discover that Bobst still had the right solution for us.”
Some of the other notable features incorporated into the Expertfold folder-gluer include a Schneider Electric power and control panel, Baumüller servo motors, and Festo pneumatic components. 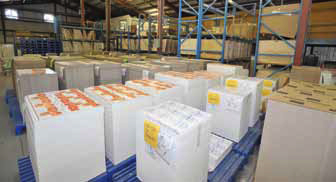 A small sampling of finished paperboard cartons produced and printed at the Ingersoll Paper Box facility. 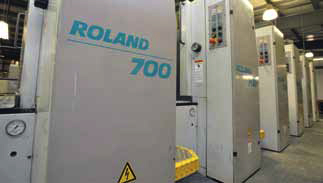 Says Skinner:“As much as business has changed over time, I think the demands in 1922 compared to those in the 21st century would be all relative to the time.
“Back then a rush order was a rush order just as it is today, and being first-to-market was no less important then than it is now,” she asserts.
“Our reputation as a trusted supplier, and our business itself, has grown directly as the result of the success of our customers’ own success in their markets,” she concludes. “We know, just as they did back in 1922, that our customers depend on us to do the job right and do it right on time—and that’s something that we are always determined to do very well, whatever it takes.”