By Andrew Joseph, Features Editor, Photos by Cole Garside  May 9, 2016 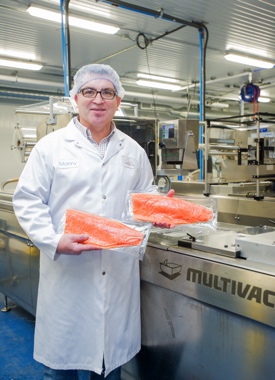 It wasn’t supposed to be about the fish for John Omstead—it was supposed to be about the vegetables.
Omstead is the fourth generation of the family that began Omstead Fisheries back in 1911 in Wheatley, Ont., on Lake Erie, a business that eventually grew to become the largest freshwater fishery in the world.
In 1984, the family sold Omstead Fisheries to Labbatt and five years later in 1989,  John Omstead decided he needed to venture out on his own, starting up a high-end frozen vegetables company processing company called Family Tradition Foods—even having its own brand called John O’s. 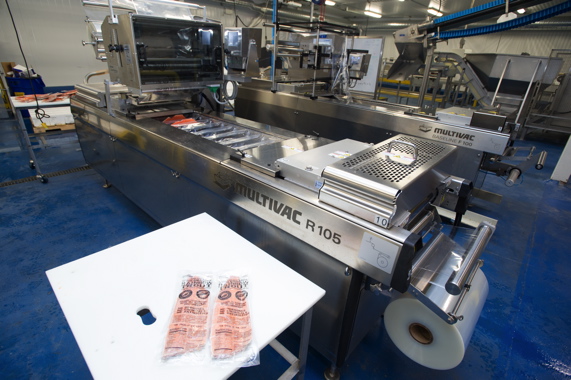 Purchasing a Multivac F 100 thermoformer (background) and an R 105 thermoformer (foreground) in the last two years enabled the John O’s Foods plant to extend the shelf-life of its frozen packaged trout up to 24 months.

It became a very successful company, with his veggie business farming some 2,800 hectares of land in an around southwestern Ontario, with Omstead employing in excess of 2,000 workers during the summer peak seasons.
“We were privileged to secure a long-term contract with Pillsbury to co-pack its Green Giant brand—the core pillar of business that enabled back financing to acquire the Tecumseh Green Giant plant in the autumn of 1995,” says Omstead, “and after a successful 14 years, both Green Giant and ourselves mutually agreed that it would be in the best interest of us both to sell the Tecumseh plant to Carriere Foods in 2006, which then packaged for all of their plants. It was later sold to Bondouelle, the largest canned and frozen vegetable company on the planet.” 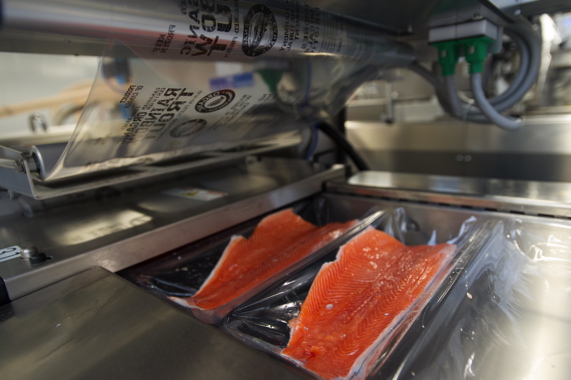 Fresh fillets of trout are placed in the lower tray of the R 105 thermoforming machine, designed and manufactured by Multivac, to create a hermetic seal around the fish to maintain fish color, texture and taste, while effectively locking in any fishy scent inside.

Prior to selling his vegetable company, Omstead had already opened up his own fish  processing company back in 2000—John O’s Foods Inc.—as a way of looking ahead by looking back.
Despite this company having been haled as one of the best freshwater marketers and processors in North America, Omstead says he owes a lot of what he knows to family, tradition, hard work and a combination of each—lofty family ideals he learned well and continues to learn, he says.
“I believe that taking that sidestep from the family’s original business of fish into the vegetable industry helped me create my own identity,” he says even after going back into the family’s freshwater legacy.
Nowadays, John O’s Foods is a fish processor and distributor of domestic and European freshwater fish species, such as perch, pickerel, trout, whitefish and white bass, offering its product in both fresh and frozen via its own brand, as well as a co-packer for other brand owners. 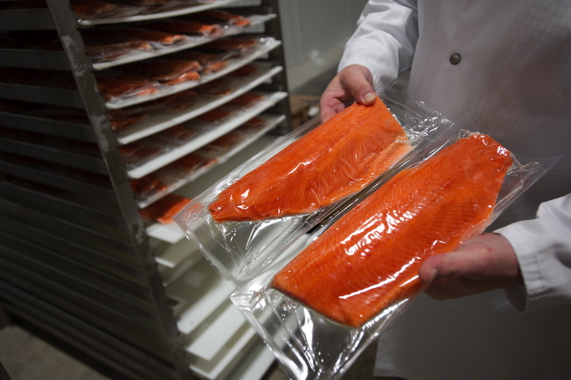 After being sealed in a clear, plastic film pack via the Multivac model R 105 thermoform packaging machine, the individual trout fillets will undergo a thorough freezing process before being shipped to the company’s customers across Canada and the U.S.

There is a quota for the amount of fish—in total for every person and business—that can be fished from the Great Lakes in one year—11-million pounds, with John O’s Foods actually receiving about 25 percent of that total.
And that’s still not enough to satisfy its huge international customer base, which is why, including Lake Erie, John O’s Foods also receives fish caught from various waters up to a 2,000 kilometer radius, as well as farm-raised ruby-red rainbow trout from Blue Goose Farms.
Drawing on their vegetables past which required the most state-of-art facility and equipment, the John O’s Foods fish processing company is housed within a 55,000-square-foot facility accredited with full BRC (British Retail Consortium) global
standards certifications and validated adherence to the required GMP (good manufacturing practices) protocols.
“While we do offer a hand-filleting operation, we also have an automated whole fish and fillet grading machine, an automated descaling machine for all lake species, as well as de-heading and filleting lines for perch, walleye, white-fish and steelhead trout,” Resendes mentions. 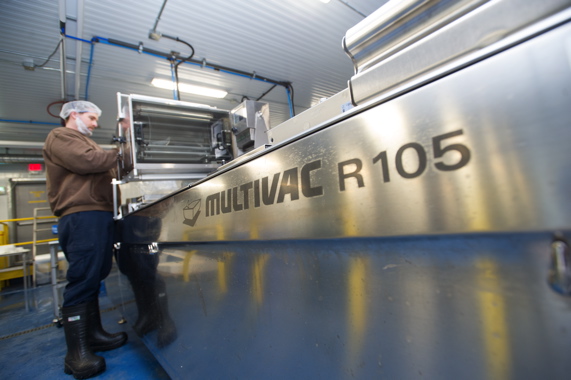 A John O’s Foods line operator at the Wheatley production facility performs a quick changeover on the model R 105 thermoform packaging machine from Multivac to set up another production run of packaged freshwater fish fillets. 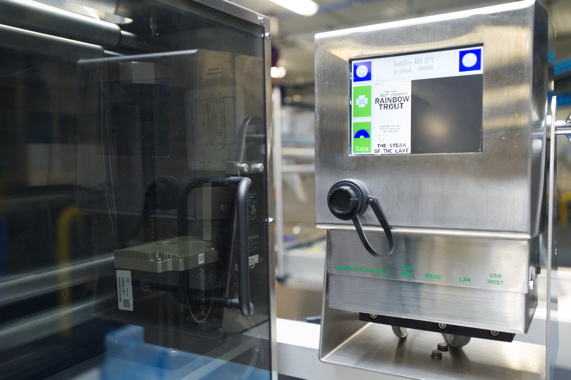 The easy-to-operate touchscreen HMI (human-machine interface) terminal of the BELLMARK EasyPrint mlp thermal-transfer printing system generates a graphic image to indicate which ‘label recipe’ is currently being printed and applied onto the packaging.

TRUE TO FORM
The newest capital investment for John O’s Foods is its R 105 thermoform machine manufactured by Multivac that was installed on February 1, 2016.
“We use it to vacuum pack frozen trout and white-fish for the food industry, which essentially gives it a shelf-life up to two years,” explains Resendes.
John O Foods purchased its R 105 from Multivac Canada Inc. With over 50 years of packaging experience, Multivac designs, manufactures, sells and supports a wide range of quality packaging equipment, including thermoforming machines for automatic packaging; tray-sealers for use with pre-made trays: and chamber machines for packaging in pre-formed pouches.
Known as a simple plug-and-play packaging system, the Multivac R 105 thermoformer is said to provide excellent value for a relatively small investment.
“It is simply a great machine that has helped greatly increase the efficiency of our production line which will in turn allow us to increase our market share,” extols Resendes. 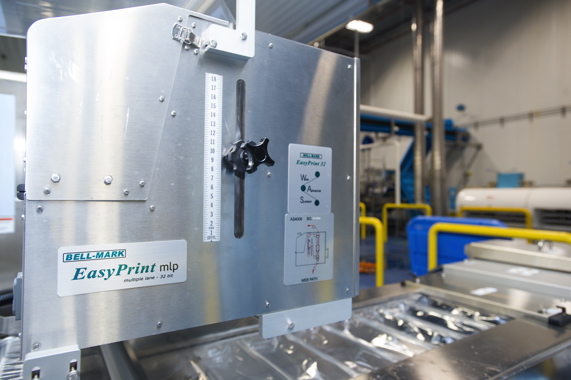 NEW SCHOOL
Prior to the Multivac addition, John O’s Foods utilized a more manual approach to processing with a double-chamber machine that could vacuum seal six sleeves during a 45-second cycle.
The process required a manual labor-intensive pre-sleeving of the product in order to keep up with the loading and unloading of each respective chamber.
But, with the addition of the Multivac R 105 thermoforming equipment, the system process at John O’s Foods almost doubled production, while showing significant savings on material costs and labor.
“The final packaging we get from the Multivac R 105 is far superior to the old method, significantly more hygienic, has a better product look or presentation, and is certainly worth the investment,” says Resendes.
The R 105 is a full-automatic packaging system that is, according to Multivac, able to provide economical packaging with a superior hygiene, technology and quality on par with other more high-end machines from the company.
The Multivac R 105 thermoforming machine can form packages, fill and seal via vacuum, or with a modified atmosphere—all with the same machine.
“We love the tight seal the R 105 forms over our trays and sleeves,” notes Resendes.
The machines is compact and quick, but importantly, is geared towards hygiene from top to bottom.
The R 105 design avoids edges and corners, offering instead smooth, slanted surfaces to allow proper run-off of cleaning solution and dirt.
It also has an easy-access frame profile for both cleaning and maintenance tasks.
Inside the R 105, Multivac maintains the hygiene optimization via its chain guide, chain design, lifting mechanism and mechanical elements, motors, valves and cabling.
Available with 24 different die formats and a maximum forming depth of 95 millimeters, the R 105 easily packages fish, meats and cheese, as well as non-food medical and consumer products. 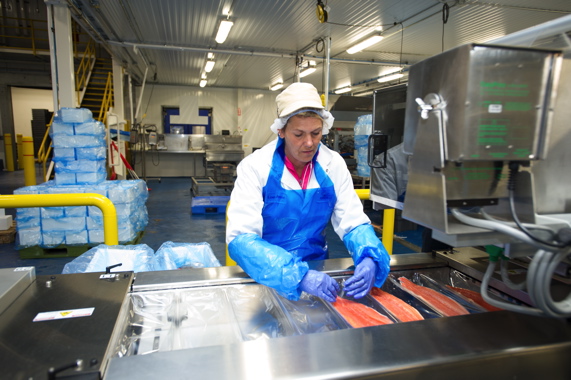 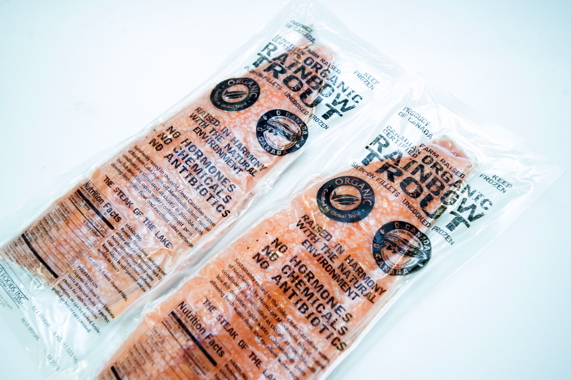 SECOND LINE
Another Multivac machine to recently enter the fold at John O’s Foods is the F 100 packer, installed in July of 2014 to vacuum-pack portions and trays.
According to Multivac, the F 100 packs all types of products automatically, hygienically and economically.
The F 100 is modular, easily expandable and with custom-made dies and equipment options, it can be set-up for very specific packaging tasks.
Made of high-quality, durable stainless steel, the F 100 is another easy-to-clean design that Multivac is known for, allowing for complete wet cleaning.
For operators, there is ease-of-use thanks to the touch display HMI 2.0 user interface, while the machine’s energy-efficient film transport systems, lifting systems and cutting units provide costsavings.
“Prior to us purchasing the F 100, we used four people working that previously-mentioned vacuum chamber system,” recalls Resendes, “essentially allowing us to pack approximately 240 pounds of fish an hour.
“But all that changed, thanks to Multivac.” 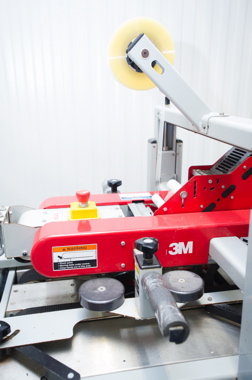 Resendes says when John O’s Foods began looking for a way to increases its packaging line efficiency, he performed his own due diligence and researched the companies he had heard good things about from other businesses.
“One of the telling signs to influence my decision,” explains Resendes, “was the fact that Multivac had about 80 percent of the market, was also know for its high-quality machinery, and was well respected in the industry.”
He says that initially he looked to purchase a used Multivac thermoformer, but after factoring in costs to adapt the system to his needs, as well as to have various dies made, “it was actually better for us to get new equipment.
“It was our first Multivac, so being cautious, we wanted an entry-level machine,” says Resendes. “But what I didn’t expect—even after being told of it beforehand—was just how much John O’s Foods was able to save with reduced labor and gain with increased capacity.”
With the F 100 and the R 105 from Multivac, Resendes says his company was able to pack some 18 sleeves every minute, running at 900 pounds of fish per hour per machine.
“We are very happy with our Multivac equipment,” extols Resendes. “We have been able to quadruple our capacity since 2014. While also reducing the number of people to do the same work to just two people per machine.”
Other equipment used at the John O’s Foods facility, includes the spectacular 48-inch wide Air Liquide Ultra-Freeze liquid cryogenic freezer.
Featuring a modular design, the Ultra-Freeze is constructed of rigid steel framework and four inches of polyurethane insulation encapsulated in a smooth, sleek fiberglass body for durable and easy-to-clean machinery.
At John O’s Foods, the fish have its freshness sealed within the Multivac equipment and are then placed through the Ultra-Freeze cryogenic freezer.
Fresh fish, which Resendes says is 80 percent water, can be f lash frozen within the Ultra-Freeze in under four minutes at -80ºC.
“The freeze is done so quickly there’s little to no drip-loss,” says Resendes noting that John O’s Foods calls this its Frozen Beyond Fresh theme.
The Ultra-Freeze is a two-stage cryogenic injection system of N2 or CO2 following product heat load to minimize cryogenic consumption.
The cryogenic flow is automatically adjusted in each zone to meet changing processes heat load. 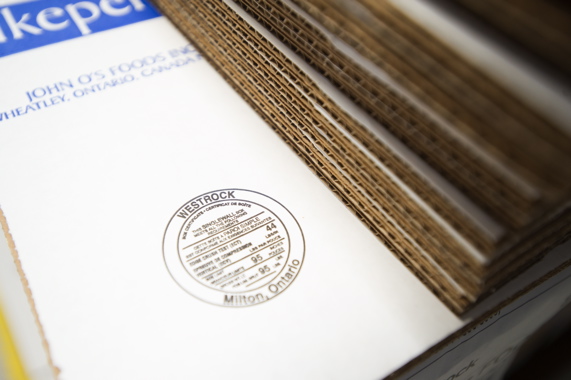 Single-wall corrugated cartons supplied by WestRock Company are used by the John O’s Foods plant to ensure completely safe and secure shipping of its products to customers.

COLD AS ICE
“Rather than the more standard mechanical refrigeration freezing, we opted to cryogenically freeze our products because the dehydration is minimized by a large enough amount that the fish, when thawed, will maintain better texture, taste and aromatic properties—not to mention it’s a much faster mechanical process,” explains Resendes.
Other equipment and supplies utilized by John O’s Foods include: 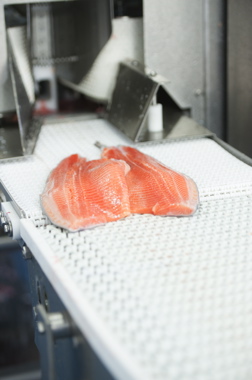 Two sides of the same fish after being filleted by the Marel Food Systems model PortionCutter I-Cut 10 fillet portioning machine at the John O’s Foods plant.

The future looks bright for John O’s Foods, says Resendes.
“The capital investment in the two new Multivac systems allows us to quicken our production line, which in turn allows us to look for more fish to process,” he sums up.
“Along with the longer shelf-life it provides, and the hygienic food safety requirements we demand, we are very pleased at how things are working out for us.
“Our top-end processing equipment is giving us the chance to enlarge our market share in the industry, and we aim to take advantage of that opportunity.”