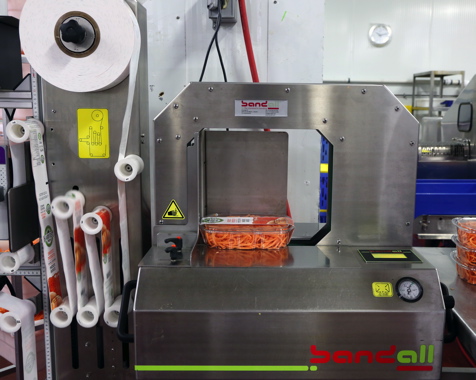 Cutline: A label system produced by a Dutch banding machine manufacturer and distributed in Canada by Banding Systems of Orangeville Ont., has enabled Toronto-based Veg-Pak Produce Limited to introduce its distinctly unique spiral-shaped vegetable products in an attention-getting packaging format.

Despite all the best intentions and wise advice, it’s fair to say that most consumers today still approach eating vegetables as something they have to endure—for health and nutritional reasons—rather than enjoy outright.
Dan Carnevale, co-owner and vice-president of operations at Toronto-based Veg-Pak Produce Limited, is on a mission to change all that.
“People generally still tend to look at vegetables as being boring old vegetables, and use it the same way it has always been used in the past—dice it, cut it, or whatever … same old, same old,” says Carnevale, a life-long produce industry insider whose intimate familiarity with the subject was cultivated early in life by his Italian-born father. 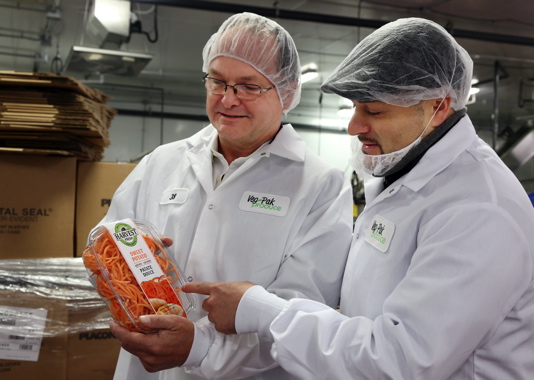 “My brother Rick and I had been working summers at Veg-Pak since we were 15 years old,” says Carnevale, relating how his immigrant father, raised on a farm in Italy, worked his way up through the ranks in the Canadian produce industry—eventually becoming a salesman at the Ontario Food Terminal in the 1970s.
After purchasing a share of Veg-Pak in the 1980s and acquiring sole control of the company in the 1990s, “We decided to make the family business our business,” Carnevale recalls.
Formed in 1943, Veg-Pak’s primary meal ticket over the first few decades was packing the once-famous Pop-I brand of fresh spinach, with its not-so-subtle nod to the beloved cartoon character Popeye.
“Even after my father bought the business, that’s how Veg-Pak was making its money,” says Carnevale.
But as the generation raised at a time when Popeye and his spinach-fueled muscles were standard TV fare started to age, the Carnevale clan decided the time was right to update their marketing and manufacturing strategies.
“We were keen to expand our product base and not to put all our eggs in one basket,” Carnevale told Canadian Packaging on a recent visit to the company’s 55,000-square-foot processing facility in Toronto’s west end.

Looking to present vegetables in a new manner on the dinner plate, Veg-Pak has created spiral-cut zucchini, sweet potato, and a Stir Fry Kit, complete with teriyaki sauce, along with the “riced” versions of nutritious vegetables, such as cauliflower.

While bagged loose-leaf spinach is still very much a flagship item in the company’s Harvest Fresh brand, Veg-Pak has also successfully expanded its repertoire to include over 30 different SKUs (stock-keeping units) for the retail, foodservice and private-label markets.
Along with creating and packing assorted vegetable trays for retailers such as Costco, the Harvest Fresh brand—launched in the 1980s but totally overhauled about three years ago—nowadays includes products like Kale, Kale Super Blend, Kale Slaw, Veggie Spirals, Riced Vegetables, eight different packs of hot peppers, baking and sweet potatoes, purple sweet potatoes, Pearl Onions, shallots, garlic, shallots, garlic, sweet and sugar-snap peas, and Nantes Carrots.
But diversification aside, what really makes Veg-Pak’s processed produce stand out from the crowd is the recent introduction of the so-called ricing and spiraling techniques that, as the terms suggest, turn fresh vegetables into something resembling rice grains and fine noodles, respectively.
As Carnevale explains, the novel techniques literally transform traditional familiar veggies into an exciting, attractive product with irresistible shelf appeal and gourmet-like aesthetics.
“It’s like getting restaurant food at home, without the doggy-bag,” says Carnevale, suggesting that the Harvest Fresh Riced Cauliflower, for example, can be used as a low-carb, gluten-free and tasty alternative to rice.
“The product can be consumed as a healthy side dish, added to soup or stir-fry, make a risotto, and even to make gluten-free pizza crust,” he extols.
“Our Harvest Fresh banner now also offers Riced Sweet Potato, Riced Butter-nut Squash, and Riced Broccoli—all 100-percent vegetable with nothing added or subtracted.”

On the spiral side, the Harvest Fresh brand offers noodle-like zucchini, butternut squash, carrots, beets and sweet potatoes, that are peeled away from the vegetable much the same way one might peel the skin from an apple.
Most recently, Veg-Pak has launched a two-veggie mix-pack that comes with a container of teriyaki sauce for stir-fry lovers short on preparation time.
“Just before cooking, they can be easily portioned by knife to whatever size the consumer is comfortable with,” says Carnevale, adding that perfecting the spiraling technique was “a learning experience.”
As he recalls, “We used a manual-crank to spiral the veggies initially, just enough to gauge consumer reaction, but even after we bought the proper spiralization equipment, we found that different machines just performed better on specific types of vegetables.”
Carnevale says this knack for product innovation will benefit the company as it continues to grow into the future.
Already employing 100 people and boasting the vaunted SQF Level 3 food safety certification of from the Safe Quality Food Institute, the Veg-Pak plant houses 10 different production lines, ranging from fully-automated lines for spinach to semi-automated lines for other types of produce.
“Our busiest time of year is between October and June, when we will work two shifts a day, six days a week,” says Carnevale, adding Veg-Pak likes to approach automation in a measured and cautious way to minimize any disruption to the workflow and to make sure it does not come at the expense of product quality.
“Our goal is to continue to find new and innovative products, and then work on automation to increase efficiencies,” he explains, hailing the plant’s hard-earned SQF certification for food safety as a proud achievement and high-level validation of the plant’s HACCP (Hazard Analysis and Critical Control Points) food safety protocol.
“This is very important because it gives them the security and knowledge that the Veg-Pak products adhere to the highest possible safety standards.” 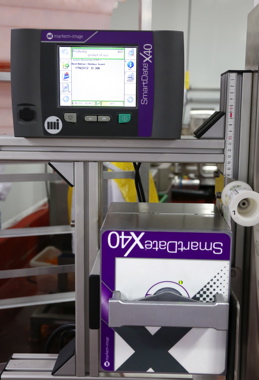 To give its spiral and riced product maximum shelf appeal, Veg-Pak uses the clear-plastic trays and lids supplied by Vaughan, Ont.-based Single Solution Products, that basically allows the uniquely-shaped veggies to speak for themselves.
However, Carnevale reveals that as the demand and production volumes for these product started to soar, the various shortcomings of the existing manual packaging process became quickly apparent.
After weighing the product and hand-place it into the lidded trays, the workers would press the product label onto the label by hand, Carnevale recalls, which would naturally result in inconsistent label placement and application.
“It required a painful degree of manual labor to ensure that each label was applied perfectly straight,” he recalls.
“And if it was applied incorrectly, the label’s adhesive made it difficult for the workers to remove, while often leaving behind a residue on the clear plastic surface that would spoil the product’s shelf appeal.”
To resolve the issue in a cost-effective manner, Carnevale contacted the Orangeville, Ont.-based Banding Systems, a North American distribution partner of Dutch banding machinery manufacturer Bandall.
“Paul Slipper of Banding Systems had first shown me the Bandall solution back in 2014,” says Carnevale, “and while I was always intrigued by what it could do, I never really had a product that could utilize it, as we were doing a lot of overwrap trays, or the products just weren’t at the level of production where I felt it could provide an effective ROI (return on investment).”
But that all quickly changed with the near-instant success of the new riced and spiraled veggie products.
“Seeing my workers struggle with the labeling to keep up to our expected production line speeds was enough for me to call Banding Systems and tell him to get a banding machine into our place pronto,” Carnevale relates.
Installed in July of this year, the compact-footprint Bandall equipment immediately provided a simple, but highly precise and repeatable label application method, whereby a narrow strip of thin paper or plastic film label is wrapped around a sealed tub-style container to hold the contents firmly in place.
“Our Bandall label system runs at an average rate of 20 packs a minute, which is a tremendous uptick from the old manual way we used to do things,” Carnevale states.
As Banding Systems partner Paul Slipper explains, one of the Bandall machine’s many attractions is the fact that it can create a tight and secure package using a very small amount of material, which can itself be recycled or composted to further lower any product’s environmental footprint.
“We profess to call ourselves an environmentally-friendly label solution provider,” states Slipper. “Recyclers love us because there’s no adhesive residue left on the plastic packaging, basically allowing them to receive back virgin PET (polyethylene terephthalate), and the band itself is recyclable wherever proper facilities exist.”
Moreover, the labeling bands themselves—produced and printed by a Bandall sister company in Green Bay, Wis.—can be die-cut and printed and/or reverse-printed as specified by customers to achieve maximum merchandising impact in addition to creating a tight and secure seal for the lidded package.

A Multipond weighscale accepts the produce from above and dispenses it down into collecting buckets until a desired weight is reached, before releasing it down into the bagging system positioned directly below.

“It’s a banding solution that works equally well in such industries as meat, produce and even textiles, to name a few, and we are very excited to add Veg-Pak to our growing customer list,” Slipper states.
“In fact, Veg-Pak is the first produce company in Canada to utilize its benefits.”
Carnevale whole-hardheartedly agrees: “We have achieved that unique combination of premium look and an innovative product that gives us a distinct market advantage by making our packages really stand out on the grocers’ shelves.
“Seeing our veggie spirals up close certainly helps capture the consumers’ eye, as they can see that this is a whole different way of presenting veggies,” says Carnevale, citing overwhelmingly positive feedback from Veg-Pak’s retail customers.
“They say it not only provides enough branding opportunity, but also allows the consumer the opportunity to see a lot of the product inside of the packaging, which allows them to make a more informed choice.”
Carnevale adds that the Veg-Pak workers actually enjoy working with the user-friendly banding system.
“The workers start it up, and after running a few bands to get the pack line up properly, boom, it’s working!”
Says Carnevale: “Our spiral and riced vegetable products have been doing very well since their introduction into the grocery marketplace this past summer.
“We are also very proud of our efforts to drive the overall purchasing demand for vegetables with our unique ricing and spiralization processes, combined with the innovative use of the Bandall labeling method,” he concludes.
“We make vegetables look fun, sexy and, most importantly, something you would want to eat again and again.”