A better slice of life

There is no way better way to break into the Canadian market than to have a little housewarming party, which is what slicing system manufacturer Weber Canada Inc. did in Mississauga, Ont., in late September at its spanking new 12,000-square-foot headquarter facility.

On display at the open house were the Slicer 305, Slicer 405, Slicer 702 and Textor 700, in addition Weber’s Sharpening Devices and Durablade Slicer Blades.

“We heard from multiple customers that support and parts availability are paramount to their business,” says Jarrod McCarroll, chief executive officer of parent company Weber Inc.

Founded in 1981 by Guenther Weber in Breidenbach, Germany, Weber specializes in manufacturing high-level slicing systems that substantially add great value for served meat, pork, poultry and cheese processors from around the globe. 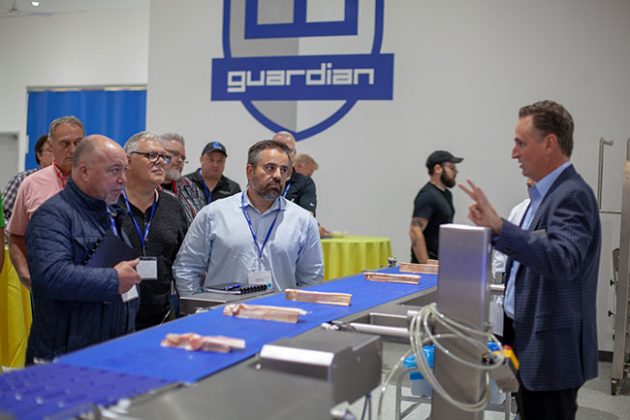 Weber Inc. chief executive officer Jarrod McCarroll (right) answering questions fielded by dozens of prospective and existing and customers about how Weber’s equipment, such as the Bacon Slicer 702 system, can help to improve their business at Weber Canada’s open house event held at the company’s new Mississauga location in late September.

Since 1996, the Kansas City, Mo.-based facility has been the North American technology center and production facility for customers. Weber Canada’s vice-president Norbert Muehlich played a pivotal role in setting up the Kansas City office.

Having worked with Weber for six years prior at their Germany location as a training manager, Muehlich was busy in building that department and got more involved in sales until he was tasked with finding a market in the U.S. The company continued to grow and succeed, and a demand for a new market had been proposed.

“About three years ago, we opened Weber Canada and we just started out with a small setup in a backroom of one of our partners, Multivac,” Norbert told Canadian Packaging.

Muehlich and his team found the space in Mississauga about a year ago, where they were talking about bringing Weber Canada to the next level. For them, the first step was to host an open house for trusted and potential customers.

Dan Milanovic, who is the director of elite brand development at Cardinal Meat Specialists Ltd., had never purchased from Weber previously, but decided to attend the open house after hearing a plethora of positive reviews from other companies.

“Weber is the number one slicer in the industry so there’s a few lines that we wanted to take a look at,” says Milanovic, adding that Cardinal Meats is looking for new equipment to advance their lines and business.

“It’s part of our growth strategy and Weber would be a great partner for us to achieve our goals.”

Muehlich adds, “This is not the end, we want to take it off.”

The open house highlighted Weber’s capabilities by providing customers with a tour of the new facility and showing live demos of their slicers, Weber’s most highlighted and sought-out product.

“We slice lunchmeats, cheese, briskets, but everything is usually thin, high-speed sliced.”

Weber manufactures up to 90 per cent of the equipment themselves, and purposely uses a small list of suppliers. They also construct their own blades, from their own blade factory based in North Germany. This is to ensure that Weber produces blades with the best precision possible.

Weber is the only slicing company to have their own setup in Canada, which further sets Weber apart in the Canadian market.

“We use the highest quality stainless steel that you can get,” Muehlich says. “We put a lot of pride in how we build our own machines.”

The Slicer 305, complete with a circular blade, has a blade speed of 400 RPMs, (revolutions per minute), meaning that for every RPM, customers can cut a slice of their desired product.

“You would be amazed when you pick up a steak and can go through individual slices,” Muehlich says. “They’re all the same: evenly cut, same weight.”

When designing the slicers, Weber made safety a priority. According to Muehlich, when the product gets fitted in one end, it’s in a caged safe environment. If the cover is opened during the slicing process, the machine will shut down automatically to avoid the risk of injury.

“You can only touch the product again when it’s through the machine,” Muehlich explains. “Everything else is controlled by safety circuits, server motors, drives, it’s a big technical process, and thought computerized.”

Weber’s initiatives to ensure safety go beyond their safety automation. 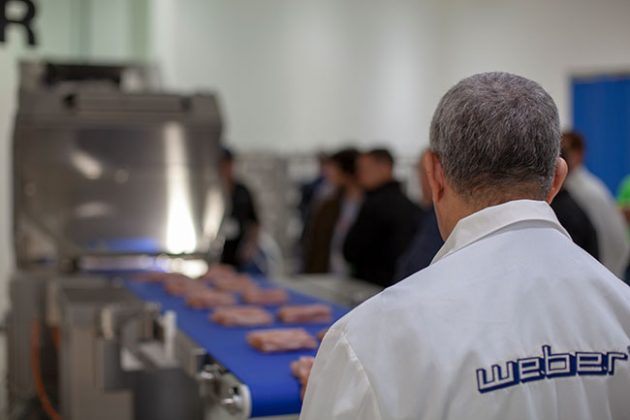 After the listeriosis outbreak in 2008 linked to contaminated cold cuts from a Maple Leaf Food plant that resulted in 22 deaths, Weber has gone to great lengths to ensure that such an episode does not happen again and adheres to a meticulous sanitation process.

After the listeriosis outbreak in 2008 linked to contaminated cold cuts from a Maple Leaf Foods plant that resulted in at least 22 deaths, consumer packaged meat companies have been vigilant to ensure the same thing does not happen again. Weber treats this procedure with utmost care.

The sanitation process first begins when the machine is designed and built, to ensure that it is easy to dismantle and inspect. The maintenance crew disassembles the parts. Once all of the parts have been taken off, a separate cleaning crew arrives and they spray sanitizer, use chlorine, foam the equipment and then wash it off.

Some customers have a sanitation routine, where they extensively clean the equipment either once a month or bimonthly. Customers often steam the machine in its entirety, which means it gets heated up to 165°F to kill and prevent listeria.

One problem in Canada and the U.S. according to Muehlich is the shelf life the products, explaining that Europe does not face the same issue because their shelf-life is so short that listeria cannot grow.

“Even if you transfer it from the machine, your product has no chance to develop in a week or 10 days and that’s about the shelf-life you get,” Muehlich explains.

“Here, when you buy from a supermarket, it can hang there for 90 days, from the day it was made. It’s pushing 120 days.”

Weber Canada has not only had to adjust to the cold Canadian weather and the shelf-life with their move to Canada.

In recent years, consumers have been changing their eating habits, moving towards a healthier lifestyle by purchasing tofu and antibiotic-free products. While there is still some demand for cheese and bacon, there is very little movement for lunchmeat.

“A lot of people now, instead of grabbing a Tim Horton’s sandwich, they may go and make their own sandwich and buy the bread that they want to eat, and the lunchmeat that they like to eat. And this is clearly where it comes from,” Muehlich says.

“Why is Subway down 7 per cent? Because customers don’t buy their sandwiches as much as they used to anymore.” 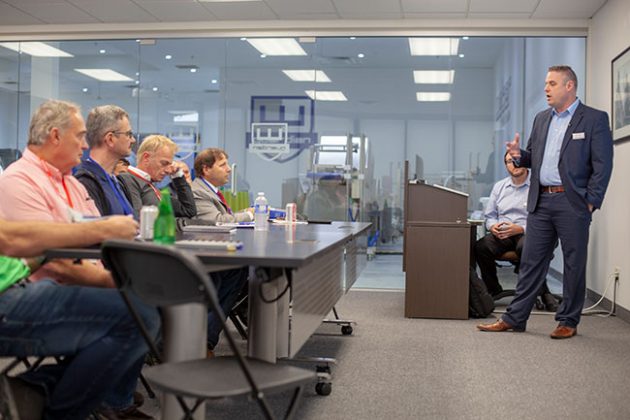 To assess how Canadian market trends and eating habits of customers are changing, Weber Canada will be adjusting their strategy, including the kinds of products that they will slice.

Muehlich explains this as a chain reaction, as suppliers for sandwich makers like Tim Horton’s, Subway and McDonalds look at these numbers and cut down their supplies if it is not making a profit.

To better understand how Canadian market trends and eating habits of customers are changing, Weber Canada will be closely assessing and adjusting where they see fit. So far, these changes include the products they slice and looking at the cost.

“This will significantly change the market because those products are in a different price range,” Muehlich says.

“There will be less products sliced, but it will cost more and that is something that we all need to adjust to.”

After seeing the slicers in action, the decision to purchase with Weber was a no-brainer for Milanovic, who found everything about the equipment to be impressive.

“From the lack of noise being produced by the equipment, to the efficiencies, to the stackability of it, just overall fit and performance, it’s Weber, what more can you say?” Milanovic says.

McCarroll believes that the open house allowed both potential and trusted customers to not only see and feel who Weber is as a company, but walk away with the understanding that their intention is to enhance the quality of their businesses by providing them with first-rate equipment and products that are accessible.

Muehlich had used the metaphor of the ‘perfect portion’ to embody what Weber does. Muehlich explained that Weber not only provides the best equipment for their customers, but that Weber employees will not
make them feel like customers.

“It’s not always just about the product, it’s about the home,” Muehlich says.

“We want to deliver the perfect portion to our customers, which starts with the guy cleaning the restrooms in our building to the CEO or the owner. Everybody in there has a job.

“The biggest thing out of all of this is that customers see your commitment.”