Off the beaten path

Life may be a journey, according to ancient wisdom, but as one of Ontario’s most popular craft beer labels suggests, it would be a pretty boring ride without a few adventurous and memorable detours along the way.

Produced by the privately-owned craft brewer Muskoka Brewery deep in the heart of the province’s famed Muskoka cottage country in Bracebridge, Ont., the aptly-named Detour brand of India Session
Ale perfectly captures the spirit of the company’s ongoing quest to reward Ontario’s beer drinkers with unique new beer experiences that will enrich their appreciation of the art-and-science of craft brewing with premium-quality, all-natural beer products suitable for any social occasion or moments of laid-back recreational leisure.

Started up in 1996, the company has never been shy about leveraging the popular images of the Muskoka region as an ultimate cottage getaway to differentiate its products on the shelves of LCBO (Liquor Control Board of Ontario) and The Beer Store outlets— with the iconic Muskoka deck chair always a key graphic element of its playful, lighthearted product packaging and branding.

Making the most of its highly dedicated staff and solid branding and packaging competencies, Muskoka has build up a solid year-round product portfolio also comprising the Muskoka Craft Lager, Cream Ale, Shinnicked Stout, Mad Tom IPA and its higher-alcohol content counterpart Twice as Mad—complemented by a diverse variety of seasonal limited-time offerings launched throughout the year.

Manufactured by ASCO Numatics, the FlexiBlok FRL Series air filter-regulator installed above the rotary can rinsing system (inset) uses compressed air to ensure highly effective removal of water, dust, debris and other contaminants for the cans prior to filling.

Along the way, the popular brewer became a highly- respected local community leader, sponsoring and engaging in a wide variety of local social causes, while notably becoming the first microbrewer in Ontario to
make a public pledge to pay a “Living Wage’ to all of its employees, now numbering well over 100 full-time staff.

In a region where regular full-time employment is fairly scarce after the peak cottage and tourism season dies down by late fall, such gestures go a long way to building enduring brand loyalty among the local
population and, in fact, throughout the province’s craft been industry and beyond.

“We’ve been around long enough to have taken part in the great growth we’ve seen in the craft beer industry, and we continue to outpace a tightening market.

“In fact, this year will be one of our biggest volume growth years ever,” says Muskoka Brewery president Todd Lewin, who heads the company alongside majority owner Bob MacDonald, a big Muskoka Cream
Ale fan who first invested into the brewery back in
2008.
That investment helped finance the brewer’s move into a much bigger 39,000-square-foot plant on the Muskoka Beach Road in 2012—spurring accelerated production and employment growth that ultimately
prompted the company to significantly expand the building to 81,000-square-feet.

“For us, what keeps our momentum strong is that we are really rooted in our mission to become Canada’s most trusted and iconic beer brand,” says Lewin, “and our strive towards this mission every day by ensuring we are staying true to our roots in quality and freshness.

“Our dedication to freshness upholds our products’ quality,” Lewin proclaims.

“Every can and bottle we produce is labeled as ‘Freshest By’ a certain date within four to six months.

“This means our customers and retailers can make sure they’re enjoying Muskoka creations at their best,” he states. 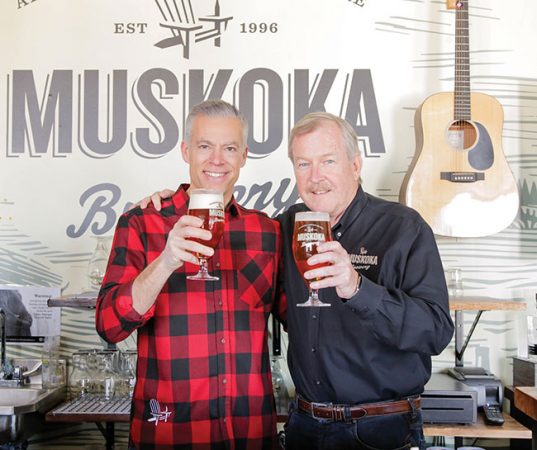 According to Lewin and the plant’s director of operations Brett Stevenson, much of the impetus to expand the new facility was driven by the strong and irreversible shift from bottled beer to canned beer right across the province of Ontario and beyond—prompting significant capital investment in additional brewhouse capacity and a new canning line.

“The whole push to invest in this new equipment stems from the growing demand for cans, as bottles take a backseat in the beer industry,” Lewin explains.

“The beer is more protected from light and other elements in a can; there’s the cost-saving incentive to buy larger servings in tall cans for consumers; and it’s a much safer container to ship the product.”

Housing an on-site QC (quality control) lab, staffed by two full-time lab technicians to perform microbiological tests on all incoming ingredients and to test all finished product, alongside some new product
development work, the revamped facility is a fitting embodiment of the company’s proactive mindset and industry leadership aspirations.

“We have really made a statement to be a quality leader,” Stevenson told Canadian Packaging on a recent visit to the lively Bracebridge plant, fronted by an on-site beer shop that also sells remarkably broad
and varied selection of branded company merchandise ranging from apparel to glassware and fashion accessories.

“By having this capability we are not only supporting our own interests but also the broader craft brewing community by raising the bar for product quality in this sector,” Stevenson states.

“In fact, we are currently working on becoming the first craft brewer to achieve food plant level accreditation, which is one of our goals for 2019,” Stevenson adds, saying that Ontario’s fairly recent decision to
allow beer stores at major grocery retailers will ultimately subject craft brewers to a closer degree of scrutiny for food safety and other compliance issues by the retail customers.

“We want to be ahead of the game when the moment arrives,” he says, “hence we choose to walk the talk, as it were, to make sure our commitment to quality stays levels above the current industry average.”

Housing a highly-automated four-vessel 70-hectoliter brewhouse manufactured by DME Brewing Solutions of Charlottetown, P.E.I., along with four 50-hectoliter and 28 140-hectoliter capacity fermenting
tanks, the Muskoka Brewery plant has capacity to produce just over 11,000 hectoliters of beer month, according to Stevenson.

“We have six full-time brewers working alongside our fully-accredited brewmaster Curtis Bentley, who has really challenged us on product quality and product styles to raise our game, as well as address many
brewhouse efficiency issue to make sure our yields are as high as they can be.”

“We typically try to finish three full tanks of beer a day, always keeping the tanks rotating on a continuous basis.

“We don’t like to leave beer in a tank longer than required,” says Stevenson, adding most beer product spend about there weeks in a fermenting tank before being ready for packaging.

“We are also one of the few craft brewers to have a fermenting cellar panel that lets us see how each beer is performing in the cellar,” Stevenson points out.

Once the beer is ready for packaging, it is transferred through a lenticular filter to remove any unnecessary solids and on to the Flottweg centrifuge—a series of spinning disks housed inside stainless-steel piping—to achieve optimal product clarity without sacrificing the product’s aroma, according to Stevenson.

“This centrifuge was really a game changer for us,” he extols. “It made immediate impact on how the beer tasted—for the better, of course.” 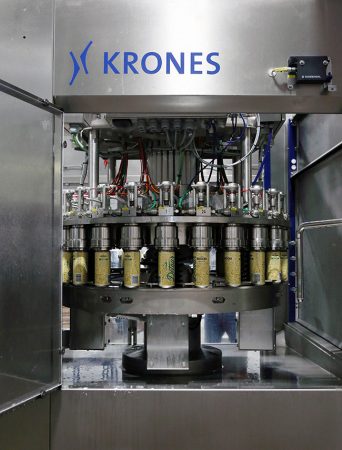 After spending a few hours in a newly-installed inline carbonation unit, the beers is finally ready to be transferred to either the older semi-automated bottling line, installed about five years ago, or the brand new automatic Craftmate canning line from leading global beverage line equipment manufacturer Krones AG.

According to Stevenson, about 20 per cent of the plant’s output is earmarked for the 20-liter and 58.6-liter metal kegs shipped to the company’s hospitality industry customers, which is expertly handled by the plant’s brand new, state-of-the-art KHS Immokeg CombiKeg eight-stage keg processing system manufactured in Germany by KHS GmbH.

Compared to our previous manual kegging system, this has enabled us to double our kegging throughput, Stevenson notes, “while reducing the manual labor input by half.

“It’s basically a ‘keg-a-minute’ system,” he says, “while also praising the system’s high-accuracy volumetric filling process for putting an end to the costly and frequent keg overfilling with the old manual system.

As for the remainder of production, what used to be a roughly 50-50 split between cans and bottles up to a couple of years ago has been rapidly refocused on can production in step with shifting consumer demand, so that it now account for nearly 90 per cent of the packaged product.

Occupying the largest part of the building’s recent floorspace expansion, which also doubled the freezer capacity and added 9,000-square-feet of warehousing space, the plant’s canning line operation is set aside to accommodate the fully-automatic automatic, turnkey Craftmate canning line delivered by Krones.

Developed by Krones specifically to allow lower-volume craft brewers the flexibility to process a broad range of can sizes and formats, the 24-head volumetric Craftmate filler with a fully-integrated four-head cappers; a compact valve manifold with product tank and a control cabinet with an integrated pneumatic control system; an operator-friendly-touchscreen control terminal; an inclined table-top with a fully-enclosed cabinet with integrated pneumatic control systems for the valve manifold; and an integrated CIP (Clean-in-Place) station connected directly to the brewhouse tanks and vessels.

“We worked close with Krones engineers to ensure that we would end up with a fully-automatic canning line that would take care of all our current and future production needs,” says Stevenson, noting that the plant’s previous two-filler canning line could only achieve maximum throughput of 89 cans per minute at best. 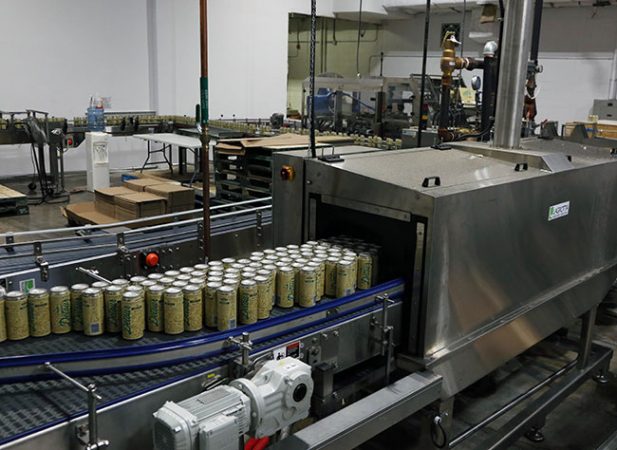 “There were also some product variability issues between the two fillers,” he recalls, “and it also require a lot of manual work to keep in running at optimal speed levels.

“It was forcing us to run 24 hours a day, five days a week,” Stevenson says, “which was simply not very efficient.”

Installing the new Craftmate canning line resulted in stunning immediate improvements in all areas of canning production, according to Stevenson.

“Being able to produce at speeds of 225 to 250 cans a minute has enabled us to scale back to a one-shift operation, while taking care of all the production needs to keep our volume growth on the right level,” he beams.

“Our management identified our former canning operations as a highly important area for new strategic capital investment,” Stevenson says, “and installing this high-performance Krones Craftmate line here is an important point of pride for our people, as well as strong statement of intent to the industry at large.”

Having spent 12 years with a major food producer using a broad array of highly automated packaging machinery and systems before joining Muskoka Brewery about two years ago, “My prime objective coming here was to make sure that our forklift drivers are the busiest guys in the plant,” Stevenson confides.

“The new canning line has done just that.” 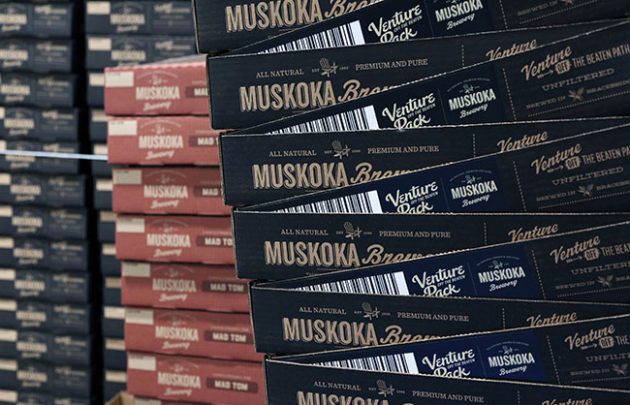 With Krones supplying most of the key pieces of the canning line equipment— from the depalletizer and transfer/accumulation conveyor through the CheckMat fill-level inspection system and can warmer—Stevenson and his team of in-house engineers worked to take care of the remaining end-of-line packaging requirements, including installation of a low-level Unipak depalletizer.

“The whole project took about a year to complete from concept to startup,” Stevenson states, “and it’s fair to say that it was time well spent.”

Says Stevenson: “We are not putting in automation to replace people, because it is the people who have made the craft beer business what it is today, but it is important to have a certain level of automation that can support the company’s growth into the future.

“By doing so, we can actually provide our people with more interesting work tasks than spending a whole day manually pushing cans down the conveyor line,” Stevenson concludes.

“It’s a platform for making better use of our labor resources and in-house talent, which ultimately helps us run a better beer business all-around.”