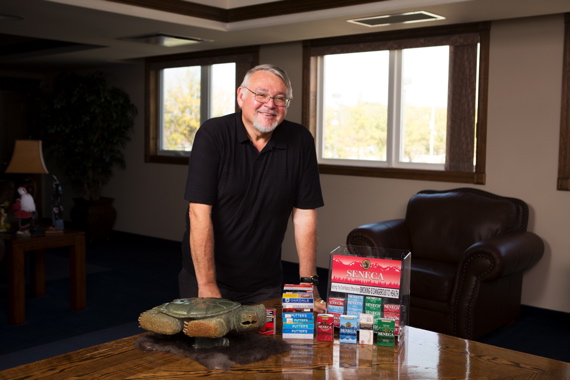 Caption: Grand River Enterprises director of technical services Michael Martin stands beside some of the tobacco products produced at the 600,000-square-foot facility in Ohsweken, on the Grand River Territory of the Six Nations.

While Canada’s Federal government has spent vast quantities of money in anti-smoking campaigns, it was still allowing farmers to grow tobacco as a cash crop.
In 2008 in an effort to change the status quo, the government created a $300-million program that would allow tobacco farmers to move into other crops, but for those that accepted, a return to tobacco farming would not be allowed.
But a funny thing happened. Rather than a decline in tobacco production, it increased by 144 percent through 2013 and the number of acres of tobacco fields doubled. 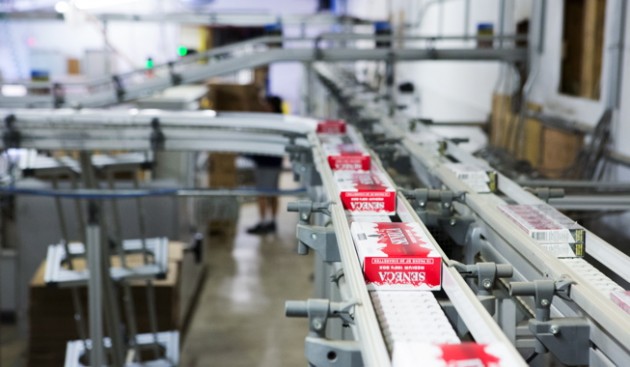 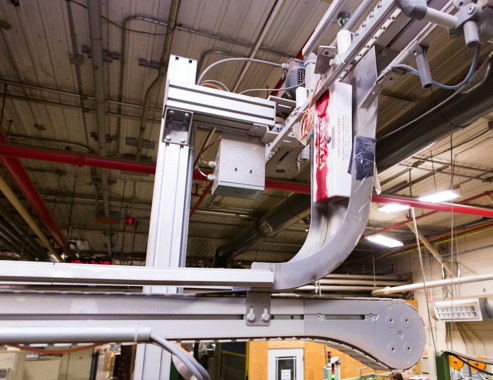 Cartons of tobacco product slide down a chute on the elevated wedge conveyor from one elevated level to another, moving to a casepacking system. S-shaped sledge to move tobacco products to a separate cartoning area.

While there may be numbers to indicate that smoking proliferation in Canada has declined over the years, Canadian tobacco globally has not.
The global tobacco industry is a high-stakes business, and operating within one of the most competitive markets in the world isn’t easy even for those that have been around for decades, with few newcomers entering the world of multi-national tobacco production being successful.
Bucking that trend, however, is a Canadian company—Grand River Enterprises Six Nations Ltd., headquartered in Ohsweken on the Grand River Territory of the Six Nations about 100 kilometers southwest of Toronto—that first opened its doors in 1997 as a small company producing cigarette products with a single packer and the overall capabilities of producing 800 cases a month, now producing millions of cigarettes daily with global concerns.
Fully-native-owned—led by chief executive officer Jerry Montour and president Steve Williams, Grand River Enterprises is fully-licensed by the Canadian federal government as a tobacco manufacturer, and has become big business for the Six Nations community, bringing both employment opportunities as well as a healthy economy on the Reserve, with some 1,000 jobs being spun off for First Nations people.
The Six Nations of the Grand River Territory is a league of nations consisting of the Cayuga, Mohawk, Oneida, Onondaga, Seneca and Tuscarora bands.
“We are the largest First Nations manufacturer of tobacco products in Canada, with Grand River Enterprises having about 450 employees working here at the Ohsweken facility,” Grand River Enterprises director of technical services Michael Martin told Canadian Packaging magazine during a recent visit to the tobacco processing facility. 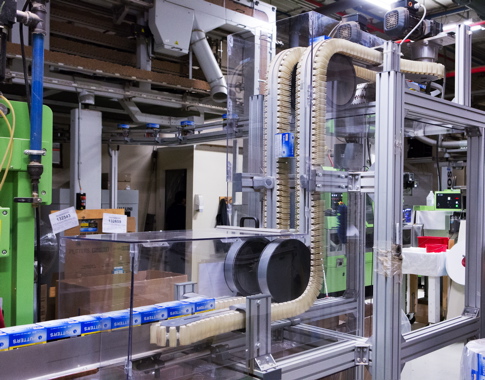 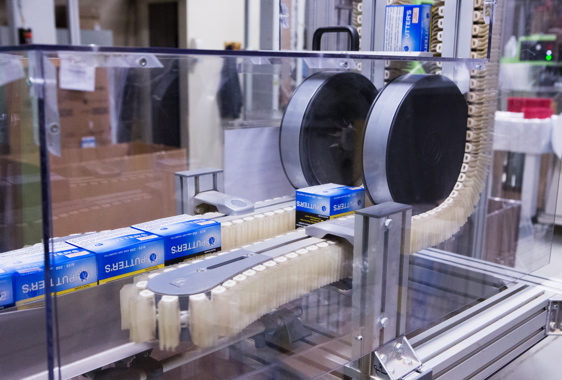 A close-up of the infeed mechanism for the FlexLink wedge elevator conveyor.

“Our strengths are in the development of brands that provide our customers with a large variety of choices, value and quality tobacco,” relates Martin. “We have a strong and well-balanced portfolio that we feel will enable us to continue growing both our Canadian and international markets.”
According to Martin, the founders believe that the First Nations peoples had trade routes worldwide before Europeans came to North America, and now the company is merely retracing those routes and rebuilding international trade partners while building an economic base with North American indigenous communities.
Says Martin, “There’s a certain degree of spirituality involved in the production of tobacco, as we believe it is a sacred plant that comes from our Mother Earth.”
According to aboriginal lore, after Sky Woman fell to earth on to the back of a turtle representing North America, it was after her own pregnant daughter died after giving birth to twins. After Sky Woman buried her daughter, from her body grew the Three Sisters of Corn, Beans and Squash, and from her grew the tobacco plant. This daughter is known as the Earth Mother. 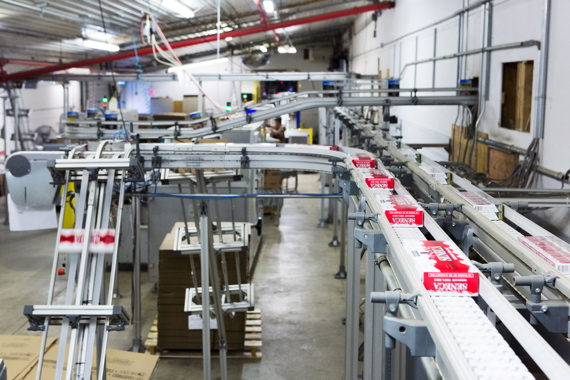 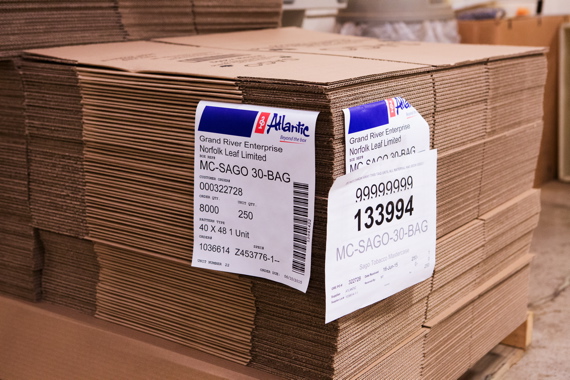 MOVING IT
As Grand River Enterprise has grown over the years adding more tobacco processing machinery to its production line arsenal, it has repeatedly utilized the transportation capabilities of FlexLink Systems Canada headquartered in Burlington, Ont. to supply them with conveyor systems to move the individual packs of cigarettes over to the cartoner equipment.
“Fifteen years ago,” relates Martin, “I bought my first conveyor line from a company that FlexLink eventually purchased. It was robust and never any trouble to run—never even had to replace a chain in it.
“FlexLink continued that tradition admirably. That’s why I love FlexLink, and that’s why all of the conveyors we use at Grand River Enterprises are FlexLink conveyors.”

An SEW-Eurodrive motor helps provide a smooth turn for cartons of cigarettes on the elevated FlexLink conveyor line.

FlexLink is part of the COESIA group of innovation-based industrial solutions companies operating globally, headquartered in Bologna, Italy and fully-owned by Isabella Seràgnoli.
In operation since 1980, FlexLink is a leading provider of high-end solutions to manufacturing industries such as: food, beverages, personal care, healthcare, automotive and electronics, and is per- haps best known for its high-quality, high-performance conveyor systems.
FlexkLink general manager Jeff Jones says: “Because of the way Grand River Enterprises has expanded since it opened, it has had to place its case packaging equipment a long way from the packers—up to 400 feet (120 meters) in some instances.
For Grand River Enterprises, it was imperative that they maintained as much floor space as possible in the working environment—just in case it needed to expand again.

UP, UP AND AWAY
To resolve that issue, FlexLink looked up to the sky and moved the product in the free space above through eight fast-moving X85 wedge elevating conveying systems in conjunction with horizontal conveyance lines.
“While some of these systems have long and winding conveyor routes, we worked with them to ensure there was a conveyor route planned that was both efficient for their production line and safe for all of their workers throughout the entire facility,” Jones explains. 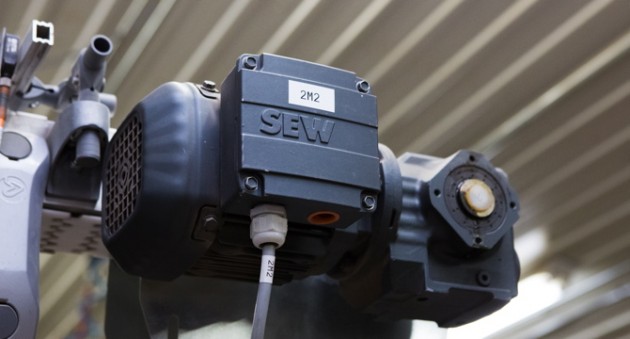 A close-up of an SEW-Eurodrive motor that helps provide the power to the FlexLink X85 wedge conveyor system.

The wedge conveyor utilizes two conveyor tracks facing each other to provide fast and gentle transportation of product—both horizontally and vertically—thanks to the X85’s use of powerful SEW-Eurodrive drive unit motors.
“The X85 gets product up in the air quickly so it can travel through the planet where space is much more abundant,” says Jones. “There is no log-jam at the wedge either, as the X85 can run at the same speed as the rest of the production line—up to 80 meters per minutes, though admittedly we don’t run it that fast. The wedge makes a difficult transfer an easy proposition.”
According to Flexlink, it has been able to use a few different methods in order to raise product from one level to another: a small five to seven- degree incline with a standard chain; via cleated links that positively pushes the product up a much steeper incline up to 90-degrees; and via the wedge, which squeezes the product from the side with flexible fingers built into the chain.

SMOOTH AND STRONG
The FlexLink chain used on the X85 is designed for smooth running, low noise levels, and as Mar- tin has attested, minimum wear and tear.
Adds Jones: “We’re also very proud of the strong extruded aluminum structure of the X85 at Grand River Enterprises, though we do offer a stainless steel version, too.
“The beams and the slide rails were all designed for a long service life, rigidity, smooth running, low-noise and capable of handling high speed movement.”
According to Jones, there are a couple of factors that determine the load capabilities of the X85: the basic load capacity of 2.5-kilo- grams per link of chain with a maximum working tension of 400N; and the tension applied to chain by elevation, but each X85 is designed for maximum efficiency on the production line.
The Flexlink standard chain is actually made of three components: chain link; pivot; and pin, with the product riding smoothly on an acetal resin chainlink. 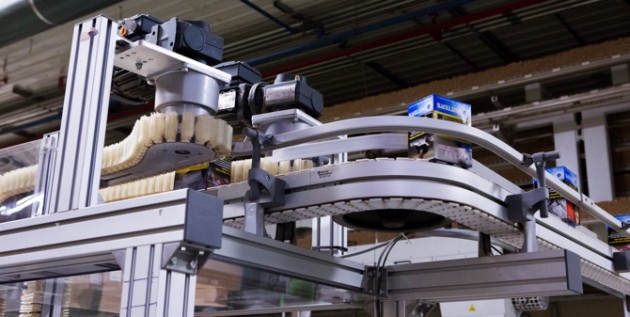 The outfeed of a wedge elevator conveyor from FlexLink quickly and safely move cartons of cigarettes to a cartoner in another part of the facility without damaging the exterior face of the brand1s packaging.

Other equipment and options for the conveyor lines supplied by FlexLink include:

After tobacco comes in from various sources around the world, it is stored, processed through various levels of curing and fermentation, flavoring and processing.
While coy about revealing just how much equipment it has at its Canadian headquarters, suffice to say that Grand River Enterprises is a well-oiled production facility with multiple industry-standard Hauni Protos 90 cigarette making machines that are direct linked to Focke F5 Packer carton wrapping complexes. 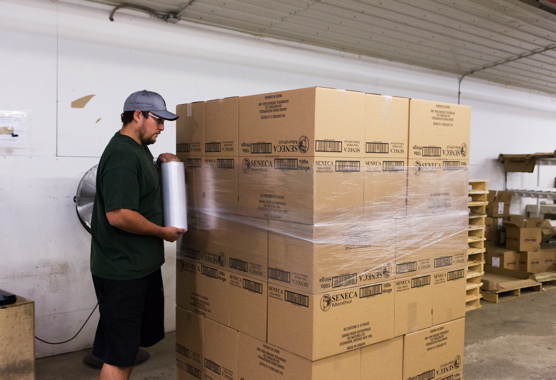 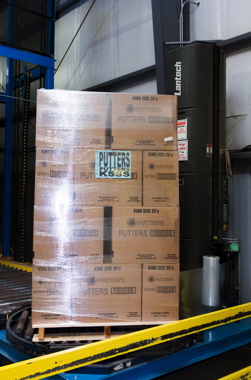 A Lantech stretchwrapper quickly secures a pallet of cigarettes.

HASSLE-FREE
The finished product cartons utilize the FlexLink conveying systems to move over to Supercase casepackers manufactured by MonTrade S.r.L.
The Protos 90 cigarette makers at the Ohsweken facility generally run at speeds up to 10,000 filtered smokes per minute. Martin calls them fast, safe, easy-to-operate, and very robust.
“Our operators can easily work with the Protos 90’s via integrated industrial touchscreen,” notes Martin. “It’s virtually hassle-free.”
All control and quality monitoring systems on the Protos 90 are bus-linked modular units using the Siemens S7-400 PLC system.
According to Hauni, its Protos 90 inspects all cigarettes for total ventilation and pressure drop; has spring-mounted pressure rollers to provide a neat and clean printmark; performs on-line laser perforation with LASER 300S or 400S-1; has a spilt-rolling unit to give spot-on laser perforation; uses a MIDAS weight control system that also detects non-tobacco related materials. 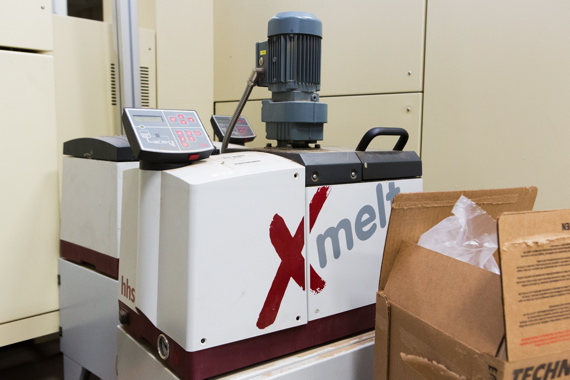 One of many Baumer hhs model Xmelt adhesive melters used to secure individual cigarette packs at the Ohsweken facility.

Henkel’s Technomelt adhesive is applied during the manufacture of the cigarette packs, applied via Baumer hhs model Xmelt adhesive melters to provide a strong, tight seal to help maintain cigarette freshness.
The Focke & Co. F5 carton wrapping units, while an older Focke model, is still under 10 years of age, but according to Martin performs as robustly and as
Quickly as the day they were first installed. Grand River Enterprises was also quite pleased with the performance of its multiple Supercase horizontal carton feeding casepackers.
Mechanically, the Supercase operates at speeds up to five cycles per minute within its small footprint.
Other equipment utilized at the Canadian facility includes: 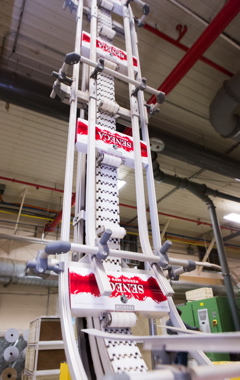 A front view of a cleated Flexlink elevator conveyor moving cartons of cigarettes up to an elevated line.

While the goal of every business is to obviously be a successful and profitable company, Grand River Enterprises is no different, but it does take pains to ensure it gives back to its communities.
The Dreamcatcher Charitable Foundation was created by Grand River Enterprises to provide grants and donations to First Nations communities and people, focusing on youth, education, health and cultural development for future community leadership. 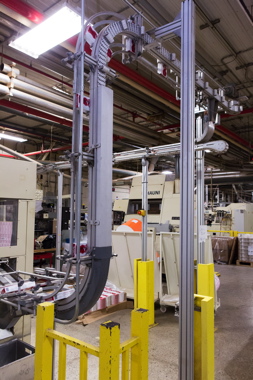 The back view of a cleated Flexlink elevator conveyor at the Grand River Ohsweken facility.

“For Grand River Enterprises, and according to the mantra espoused by the company owners, we will continue to move forward in the future as we look to the past to reestablish trade routes around the world,” sums up Martin.
“Grand River Enterprises is one of Canada’s most successful aboriginal businesses, but we are always looking to grow our business. So far, our business model, excellent products built around the consumer, and high-tech manufacturing principles conducted by our well-trained employees has all contributed to our success, and there’s no reason why that won’t continue for the foreseeable future.”