Hot reaction for tradeshow is icing on the cake. 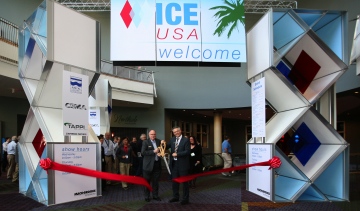 Created to fill a void left by demise of the long-running biennial CMM (Converting Machinery & Materials) exhibition back in 2007, the three-day event—held at the recently-expanded Orange County Convention Center complex—even appeared to take show organizers by surprise in terms of attendance and international content, according to Michael Boyle, executive director of Mack Brooks Inc. in Burlington, Mass.

“Show exhibitors wanted an opportunity to meet serious decision-makers, and that’s what we gave them with this show,” says Boyle, citing the expo’s total attendance of 2,431 converting professionals representing 37 countries from around the world, with 275 exhibitors occupying 50,000 net square feet of exhibit spaces. “This is definitely a good platform for us to build on for the next ICE USA show in two years time,” Boyle added.

“It matched our expectations in many respects, while also exceeding some of out expectations as well,” said Boyle, adding the show’s inaugural U.S. addition surpassed the attendance numbers of the previously-held ICE Americas and ICE Asia regional sister exhibitions also organized and managed by Mack Brooks.

“Clearly, there seems to be a lot of backlog demand in the marketplace for more capital investment in new-generation converting machinery and technologies,” he says, “with many leading end-user companies now playing catch-up with their capital investment decisions.

“Our goal was to make this a complete converting show experience and fill a void that has long existed in the North American converting industry,” Boyle adds, “and based on the feedback from exhibitors, visitors and conference delegates we have accomplished our goal.”

“A lot of quality people have come to the show and spent time in our booth,” says New Era Converting Machinery president Bob Pasquale, citing “more solid sales leads than at any other converting exhibition we attended in the last 10 years.”

John Godbold, chief executive officer of Ashe Converting, agrees: “This has been a solid show.

“We have some very serious and interesting sales leads from new potential customers, so it was certainly worthwhile for us to display and run machinery at this show.

“The show looked great and many attendees were pleasantly surprised by the amount of running machinery and technology on display. Because of that, many have stayed for two or even three days.

“It was very encouraging to see so many converting buyers and technical experts make the most of the opportunities available to them here in Orlando at this first-class facility,” says Chiricosta, adding the show’s Steering Committee group has already selected the Orange County Convention Center as the host venue for the next ICE USA exhibition in the spring of 2013.

As for the next ICE exhibition—the upcoming ICE Europe 2011 show on Nov. 8-10, 2011, at the Munich Trade Fair Centre grounds in Munich, Germany—show organizers say more than 320 exhibitors from 20 countries have already booked their exhibit space, setting it on course to surpass the record show numbers from the ICE Europe 2009 edition, which attracted a total of 330 exhibitors from 21 countries, along with 5,350 visitors from 63 countries. For more information, go to: www.ice-x.com.