European Union to be honored at the 14 edition of SIAL International in Toronto May 2-14, 2017. 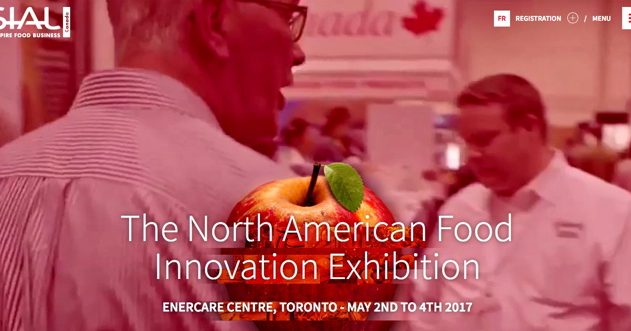 MONTREAL—SIAL Canada, the SIAL international food show in North America, is back in Toronto from May 2-4, 2017 for its 14th edition, which promises to feature numerous novelties.

The 2016 edition was held at Montreal’s Palais des Congrès in April 2016, and was a record-breaking one, and boasting an all-time high of 930 exhibitors as well as an increase of 17 percent compared to 2014 in terms of number of attending industry professionals, making it a historic year for the show. In fact, close to 17,500 visitors from across Canada and from 67 countries passed through the aisles during the 2016 edition.

After this unprecedented success, the Toronto edition is already looking to beat these numbers!

The European Union Honored
With its return to Toronto, SIAL Canada 2017 is pleased to position itself as the only show in Canada that has adapted itself to changes in terms of consumer trends, political conditions, and the economic landscape. SIAL Canada 2017 is proud to welcome the European Union as the region of honor for its 2017 edition in Toronto.

Now that CETA the Canada-European Union Comprehensive Economic and Trade Agreement—Canada’s most significant free-trade initiative since NAFTA (North American Free Trade Agreement) and the broadest trade agreement that Canada has ever undertaken—will come into force in 2017, there are tremendous possibilities arising for the food industry.

Given that the European Union is the biggest player on the global food-trading scene, it’s easy to understand why it’s Canada’s second-largest and most influential partner after the U.S.

The value of bilateral trade in goods between the E.U. and Canada was €63.5 billion in 2015. Moreover CETA represents a whole new world of trading opportunities for Canadian companies from coast-to-coast.

Putting forward the E.U. as the region of honor is also about opening up the Canadian market to all industry players—especially local and international exhibitors. Through this historic trade agreement, SIAL Canada 2017 will support, educate and create groundbreaking new opportunities for food business professionals.

EU Commissioner Phil Hogan to attend SIAL Canada
SIAL Canada is honored to announce that Phil Hogan, Member of the European Commission responsible for Agriculture and Rural Development, will be in attendance at SIAL Canada 2017 with a business delegation of approximately 60 companies for this exciting new edition of the show.

Honoring the European Union—with the help of the European Commission through their promotional policy under the slogan “Enjoy! it’s from Europe”—also serves to open the North American and European markets to the industry as a whole. The 1,200-square-foot European pavilion will be dedicated to demonstrate the accessibility, quality and diversity of the E.U. products. Well adapted to new consumer trends in North America, they should impress every industry professional.

About SIAL Canada
SIAL Canada, which includes the SET equipment and technology section, is an integral part of the SIAL network, the leading global network of shows dedicated to the food industry, with eight shows (SIAL Paris, SIAL Canada Montreal, SIAL Canada Toronto, SIAL China, SIAL Middle East, SIAL InterFOOD Jakarta, and SIAL ASEAN Manila) that bring together 14,000 exhibitors and 324,400 visitors from 200 countries. Established in 2001, SIAL Canada is the fruit of three agencies’ labor, all of whom are shareholders in the event: the ADA (Association des détaillants en alimentation du Quebec), the Agri-Food Export Group Quebec-Canada, and Comexposium. To learn more about the trade show, visit www.sialcanada.com.