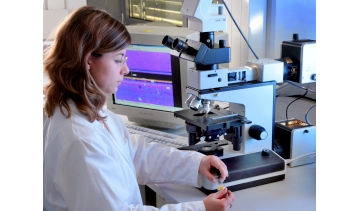 Simply put, better innovative packages are the key in the fight against food loss and wastage, whether its through more effective barrier layers, germicidal films or freshness indicators, they are all intended to help products maintain a longer shelf life and will help reform the consumers’ throwaway mentality. However, despite all these improvements, companies have to keep a constant eye on process efficiency and on costs.

Food loss and food thrown out as spoiled is occurring at an atrocious rate. In the developing countries, one out of six children is undernourished, which amounts to an overall figure of 100 million. The United Nations (UN) estimates that undernourishment causes the deaths of 2.6 million children under five years old per year. This means that hunger is still one of the biggest scourges of humanity.

Yet no one should have to go hungry. Every year some 1.3 billion tons of food worldwide ends up being thrown away – a conclusion of the current report “Food Wastage Footprint: Impacts on Natural Resources” of the Food and Agriculture Organization of the United Nations (FAO). If food losses were reduced by using food more prudently, famines could be curbed.

A staggering 54 per cent of wasted food, says the report, is lost during production, post-harvest treatment and storage. Particularly badly affected are the poorer countries of Africa and Asia where shortcomings during harvesting and logistics destroy six to 11 kilograms of food per capita each year. Exposed to heat, fruit and milk spoil, and meat is rendered inedible by contamination with dangerous germs. 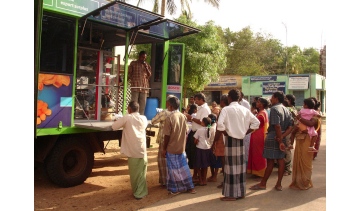 Helping others to help themselves: some years ago, in India, Bosch Packaging mounted packaging machines developed especially for local conditions on trucks in order to demonstrate the advantages of packaged foods to farmers and representatives of local authorities. (Photo: Bosch Packaging Technology)

On the other hand, wastage during processing, transport and consumption is more a problem of the industrialized nations. In Europe and North America, some 100 kg of food is thrown away per person and year although it is still fit for consumption. Demands for a change of attitude are therefore coming from the highest authorities. At his general audience during World Environment Day last June, Pope Francis called for an end to consumerism and the wastage of food.

Central theme of interpack 2014
Industry has already got the message. According to a current study by the Royal Melbourne Institute of Technology in Australia, suitable packages are capable of reducing food loss considerably. Developers are therefore working hard on new concepts for packaging machines, the related process technology and “smart” packages. A total of 100 companies from the entire food value chain, from production, retailing and packaging through to logistics, are now participating in the SAVE FOOD Initiative, a joint project of the FAO, the United Nations Environment Programme (UNEP) and Messe Düsseldorf GmbH.

Its goal is to foster dialogue between industry, research, the political sphere and civil society on the subject of food loss. Reducing spoilage will also be the central theme at the Innovationparc Packaging at the trade fair interpack PROCESSES AND PACKAGING 2014, in Düsseldorf, Germany. Exhibitors at this special Innovationparc will present their ideas on how food can be protected better from May 8–14, 2014. Furthermore, during the SAVE FOOD Conference at Messe Düsseldorf’s Congress Center South on May 7-8, 2104, experts from politics, industry and society will be exchanging views on food loss and wastage. 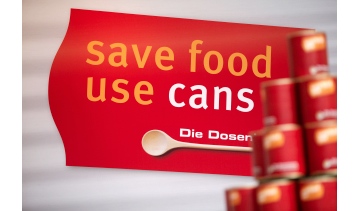 Cans against wastage: in emerging and developing countries, a great deal of food spoils due to shipment in its unpackaged state after harvesting. Simple anti-spoilage packages like these cans could prevent this. (Photo: Messe Düsseldorf/Tillmann)

The sector has a lot of work ahead of it. Farmers in Africa first have to be convinced that it is better to package their produce at source than to send it off unprotected. It is not high tech that is called for here, but education locally. Representatives of companies like Bosch, for example, therefore toured emerging and developing countries with mobile packaging machines some years back in order to demonstrate to farmers the advantages of packaged foods.

The throwaway mentality of the Western world, on the other hand, is even more difficult to combat. According to a survey by Berndt + Partner management consultants, 20 – 25 per cent of food in Europe is thrown away even though it is still fit for consumption. One contributory factor is the ‘best before date’ that has to be printed on all food packages. Once it is reached, food is often discarded. However, ‘best before’ does not mean that food is no longer edible after this date, but merely that its color and consistency may change. The currently still widespread large packs worsen the problem. The best before date is often reached before the package contents have been consumed.

Creative package solutions
Reporting continuously on a product’s state of freshness, time/temperature indicators are another approach in the battle against spoilage and waste. A useful feature is that they make any breaks in the cooling chain visible, for instance. BASF and the Swiss Freshpoint company are already producing labels containing a special pigment which are printed straight onto the package. The color changes when the contents spoil. 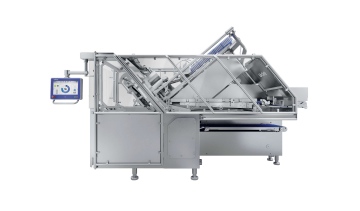 The new-generation Slicer 906 is one of the most advanced cutting machines in Weber Maschinenbau’s product range. It operates more efficiently and therefore more sustainably than its predecessors. (Photo: Weber Maschinenbau)

Research is also being conducted on active packages that interact with their contents.

Critics claim that the additional chemicals on active packages impair the products’ natural quality. In their search for a remedy, scientists of the Fraunhofer Institute for Process Engineering and Packaging (IVV) in Freising, Germany, are developing antimicrobial materials based on plant extracts, ex. from rosemary. “This way, food manufacturers can go further towards meeting the consumer’s wish for natural, health-promoting products,” says IVV materials developer Sven Sängerlaub.

The downside of many food-saving packages, however, is that they are relatively expensive to produce. If, for example, a stronger package calls for more material, it uses up more resources. The sector is therefore trying to offset the expenditure on smarter packages by economizing elsewhere along the food value chain. The manufacturers of packaging machines therefore try to boost the efficiency of their lines by increasing the degree of automation and optimizing their processes.

MULTIVAC, for example, offers its customers innovative technologies that ensure among other things that as little film waste is generated during production as possible, marketing manager Valeska Haux explains. This is achieved with the aid of advanced machine tools, such as cutting tools as examples. The integration of handling modules in the packaging line also ensures package-by-package quality control for maximum consumer protection, says Haux. 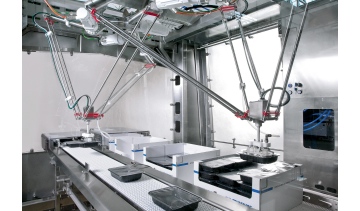 Everything under control: high speeds are essential for efficient production. MULTIVAC has a variety of automation solutions for food packaging available. (Photo: MULTIVAC)

“We boost the efficiency and hygiene of our production lines and prevent waste arising during production,” explains Mathias Dülfer, managing director of Weber Maschinenbau. Specializing in high-performance cutting machines, this company is constantly refining its range of lines. In the latest machines, innovative blade technologies, intuitive operating concepts and an open design ensure ease of operation, good accessibility and inspectability, and simple cleaning. “All this helps to make production even more efficient, more reliable and hence more sustainable,” says Dülfer.

Packaging foods more securely and with higher throughput – this is also the aim of Spanish machine manufacturer ULMA Packaging. The company covers all packaging technologies from tubular bag packages to deep-drawing machines. At interpack 2014, the company will show new deep-drawing systems for skin packages, among other products. The main function of this kind of packaging is to extend shelf life while also preventing liquid loss due to evaporation. This slows down growth.

ULMA has also developed a new control for all machine models with user-friendly software. The newly developed control promises “a huge boost to productivity on all systems,” the company claims. The innovations from the manufacturers demonstrate that a whole array of packaging strategies for preventing food loss is already available. And that they can be realized on the industrial scale at acceptable cost thanks to on-going improvements in the efficiency of the production technology. At interpack 2014, food manufacturers will have the possibility to see all of it for themselves.