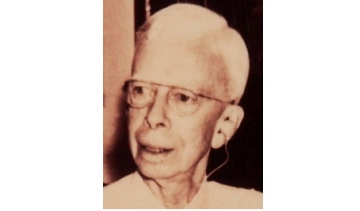 Eriez, headquartered in Erie, PA, has announced that company founder Orange Fowler (O.F.) Merwin is a 2011 inductee into the Erie Hall of Fame.

Local television station WQLN-TV started the Hall of Fame in 2007 to recognize the accomplishments of people who made global contributions while living or working in the Erie region. The 2011 class brings the total number of inductees to 20 and represents contributions in several fields, including arts and business, says Tom New, director of creative Services for WQLN Public Media.

Merwin’s rise began in 1941 when he was selling equipment to grain millers and continually heard complaints about tramp iron that was present in the grain the farmers brought to the mills for grinding. Merwin investigated “alnico” magnetic alloy (a combination of aluminum, nickel, cobalt and iron), which possessed exceptional magnetic qualities, including peak magnetic strength up to 30 times that of cobalt steel. He devised a permanent magnetic separator in 1942, sold it to a grain miller and his company was on its way.

Through innovation, organization and diversification, Eriez has evolved into a technologically advanced, financially sound, international company with manufacturing facilities in Australia, Brazil, Canada, China,  Europe, India, Japan, Mexico and South Africa , as well as its Erie, PA headquarters. Eriez has sales offices across some 80 international markets on five continents.

“We are so proud and excited that our company founder has been inducted into the Erie Hall of Fame,” says Eriez president and chief executive officer Tim Shuttleworth. “Mr. Merwin’s innovation truly revolutionized the many industries Eriez serves. This is an honor that is well-deserved.”

In addition to Merwin, 2011 Erie Hall of Fame inductees include William L. Scott, Peter Mennin, Col. Lewis Walker and the Reed family.  Scott was “America’s Railroad King” and one of the country’s first millionaires. Mennin completed 30 major musical works and was also a president of the Julliard School. The Reeds “transformed Erie into a world port” through advancements in transportation, including developing steamship lines, New says. Col. Seth Reed won the franchise rights to mint the nation’s first silver and copper coins and was the first to stamp “E pluribus unum” on a coin.