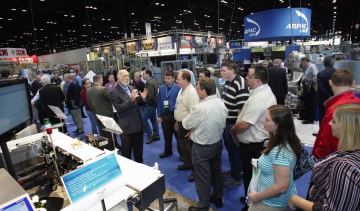 A record showing by Canadian exhibitors and attendees at last month’s biennial PACK EXPO International 2010 packaging technologies exhibition in Chicago was one of many positive highlights of a buoyant, four-day exposition signaling a long-awaited revival in the North American packaging industry’s economic fortunes and outlook.

According to the show’s organizers PMMI (Packaging Machinery Manufacturers Institute), the 1,935 Canadian visitors comprised the largest international contingent at the event—outnumbering exhibitors and attendees from Mexico, China, Japan, Colombia and Brazil and helping the show record vastly improved attendance figures from its 2008 edition, taking place right at the onset of the incoming Great Recession in the U.S. and the severe global financial crisis.

Spanning over one million square feet of exhibit space across three halls of the sprawling McCormick Place fairgrounds from October 31 to Nov. 3, 2010, the show attracted over 44,000 visitors, according to the Arlington, Va.-headquartered PMMI, while its total of  1,835 exhibiting companies represents a seven-percent increase in exhibitor numbers from two years ago.

Says PMMI president Charles Yuska: “PACK EXPO International 2010 was definitely a success. Traffic was consistently strong, and the exhibitors I spoke with were very pleased with the quality of leads they received.

“I think it’s also significant that exhibitors were queued up to reserve booth space for PACK EXPO Las Vegas 2011 next year—demonstrating the value exhibitors were receiving from this year’s event,” says Yuska, noting that the show’s 4,434 visitors from abroad, representing 125 different countries, was a 23.9-percent increase from the 2008 Chicago exhibition.

According to Yuska, the inclusion of the newly-launched Processing Zone exhibits this year was a significant factor behind the rising attendance for the show overall—despite the fact that PMMI has decided to pare down this year’s exhibition to a four-day schedule, compared to five days in the past.

“We mirror the industries we serve, and consumer packaged goods companies (CPGs) see production as a single, continuous function,” says Yuska, adding that 179 exhibiting companies took part in the  in the Processing Zone showcase of processing-related technologies and equipment.”