Bud Light can ad - a no can do right ad as it mistakenly portrays two of the four remaining NFL teams incorrectly. 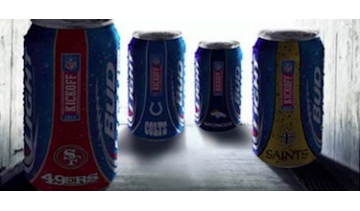 This past weekend in the NFL (National Football League) Denver Broncos quarterback Peyton Manning breathed a sigh of relief as his team survived a late-game comeback against the San Diego Chargers, wondering: “How soon I can get a Bud Light in my mouth?”

An advertiser’s dream comment Budweiser, who owns the Bud Light brand of beer, wanted to capitalize on the name-drop. Its public relations company quickly put together a promotional image featuring the four remaining football teams vying for the upcoming Superbowl XLVIII (48)… only they didn’t quite get it right.

Instead of Bud Light beer cans featuring the logo of the San Francisco 49ers, Seattle Seahawks, New England Patriots and the thirsty Denver Broncos, the photograph tweeted out via social media weapon Twitter featured beer cans of the 49ers, Broncos and mysteriously, the Indianapolis Colts and the New Orleans Saints.

Unfortunately for Budweiser, two of the four teams featured in the Twitter promotion were the wrong team.

Thirsty QB Peyton Manning did play many years successfully for the Colts – but not since March of 2012… so perhaps that is an honest mistake… but that doesn’t excuse not getting the Patriots beer can correct in the ad.

Perhaps too many Bud Light beers were consumed prior to the photo shoot.