The 2016 Half Your Plate Hockey Classic

Game now comes with a side order of "Potato Skills" and an NHL Foundation sponsorship. 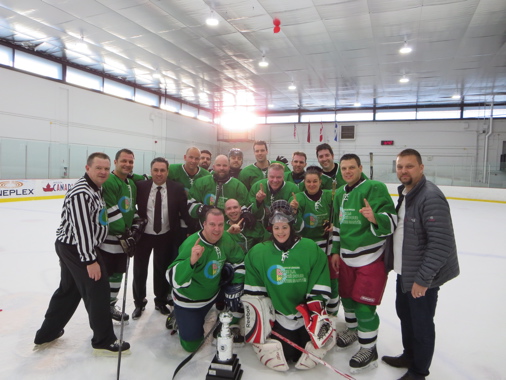 For the second year in a row, the Canadian Produce Marketing Association (CPMA) will be hosting the Half Your Plate Hockey Classic in conjunction with their CPMA Annual Convention and Trade Show.

This year’s event will take place on Tuesday, April 12 from 4PM to 7PM in Calgary. The goal of this event is to raise awareness for healthy eating and the Half Your Plate message while fostering a friendly rivalry among the industry.

“Last year’s inaugural Half Your Plate Hockey Classic was a huge success. I love that our Canadian organicgirl team is putting such creativity and energy towards building awareness of the Half Your Plate message,” says Tom Browning, vice-president customer development, organicgirl/NewStar Fresh.

Teams are made up of players of all skill levels representing the local Association (Calgary PMA) and assembled players from across Canada to comprise team CPMA. It’s a fun and relaxed game, with bragging rights and trophies to the winners.

This year will feature a new “Little Potato Skills Competition,” designed to include everyone, skates or none, where sticks are provided for participants to take shots and practice their puck skills, and is another great way to get the audience involved in the fun.

“Everyone had a great time last year. There’s nothing like a good old hockey game to get everyone together and encourage some healthy competition,” adds Mike Furi, 2015-2016 CPMA chair and manager, procurement, the Grocery People.

As an added bonus, the Calgary Flames Foundation is supporting this year’s event by “lending” NHL Alumni as supplemental players for each team and providing a selection of official NHL merchandise for prizing and giveaways.

Based in Ottawa, Ontario, the Canadian Produce Marketing Association (CPMA) is a not-for-profit organization that represents companies that are active in the marketing of fresh fruits and fresh vegetables in Canada from the farm gate to the dinner plate.

For more information on the CPMA, visit the website at www.cpma.ca.