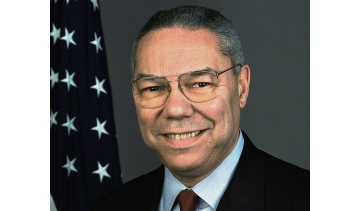 PMMI, the owner and producer of the PACK EXPO family of trade shows, has announced that former U.S. Secretary of State and retired General Colin L. Powell will be the keynote speaker at PACK EXPO Leadership Lecture during the 2011 PACK EXPO Las Vegas.

“When we were considering who we wanted to invite to speak at our PACK EXPO Leadership Lecture, Colin Powell was the first name on our list,” says Charles D. Yuska, president & chief executive officer of PMMI. “He has demonstrated exemplary leadership skills through his public service and now in private life. His insights and global perspective are especially pertinent to our audience, who are industry leaders that also compete in a global market.”

General Powell is a retired four-star general and previously served as National Security Advisor under President Ronald Regan and the Chairman of the Joint Chiefs of Staff under Presidents George H.W. Bush and Bill Clinton. In 2001, President George W. Bush appointed General Powell as Secretary of State, holding that position until 2005. For the past decade, General Powell has been committed to improving the lives of America’s youth. He is the founding Chairman of America’s Promise Alliance — an organization that works with over 400 partner organizations to provide resources that build better lives for America’s youth.

General Powell has defied racial barriers as the first African-American Secretary of State and Chairman of the Joint Chiefs of Staff. He has received several distinguished military and civilian honors including two Presidential Medals of Freedom, the Congressional Gold Medal, the Defense Distinguished Service Medal, a Purple Heart, a Bronze Star and the Soldier’s Medal. General Powell also founded the Colin Powell Center for Policy Studies at his alma mater, the City College of New York and has served on the boards of various non-profits.

“Colin Powell has made a tremendous impact on the landscape of the global climate, both politically and socially,” Yuska adds. “Now, we are fortunate that he continues to share his insights and lessons of leadership even in his private life.”

Tickets for the PACK EXPO Leadership Lecture will be available for purchase soon. For more information, visit www.packexpo.com.

PMMI is a trade association of 560-plus member companies that manufacture packaging, processing and related converting machinery in the U.S. or Canada; machinery components and packaging containers and materials. PMMI’s vision is to be the leading global resource for packaging, and its mission is to improve and promote members’ abilities to meet the needs of their customers.
PMMI organizes the PACK EXPO trade shows: PACK EXPO International, PACK EXPO Las Vegas and EXPO PACK México, connecting participants in the packaging and processing supply chain with their customers around the world. Coming Up: EXPO PACK México at Mexico City’s Centro Banamex, June 21–24, 2011, and PACK EXPO Las Vegas at the Las Vegas Convention Center Sept. 26–28, 2011.
Learn more about PMMI and the PACK EXPO trade shows at www.PMMI.org and www.Packexpo.com.