“Play a Coke” all summer long with over 185 curated Spotify playlists on bottles of Coca-Cola, Diet Coke and Coca-Cola Zero.

TORONTO—Coca-Cola is getting into the summer spirit with “Play a Coke”, a new twist on one of the company’s most successful programs of all time, “Share a Coke”.

Unique to Canada, “Play a Coke” will swap the logos on over 60 million Coca-Cola, Diet Coke and Coca-Cola Zero bottles for over 185 unique, shareable moments, each linked to a Spotify playlist that brings that moment to life. Fans will be able to access specially-curated playlists for moments such as “First Kiss”, “Road Trip” and “True North, Strong”, simply by downloading the Play a Coke app, pointing their smartphone at their Coca-Cola bottle or fountain cup and pressing play.

“Like an ice cold Coca-Cola, music finds a way to bring people together, regardless of who we are, how old we are, where we live or where we come from,” says Coca-Cola Ltd. Sparkling Business Unit vice-president Michael Samoszewski. “This summer, we are tapping into the universal love of music and inviting Canadians to ‘Share a Coke’ and the soundtracks to their special moments.”

Through the “Play a Coke” app, which was developed in Canada specifically for the Canadian market, fans will be able to digitally interact with their bottle of Coca-Cola like never before. Once a playlist is unlocked, users can play, pause and control song selection through their smartphone by twisting the bottle back and forth.

The campaign will also include limited-edition releases of Cherry Coke and Vanilla Coke, the two Coca-Cola flavors requested most often by Canadians.

The excitement continues all summer long with a second release of “Play a Coke” launching in early July, which will feature even more summer moments on bottles.

Consumers can download the “Play a Coke” app through the App Store or Google Play or visit www.playacoke.ca for more information and share their favorite summer moments with Coca-Cola @cocacola_ca on Twitter and Instagram and by using #TasteTheFeeling. 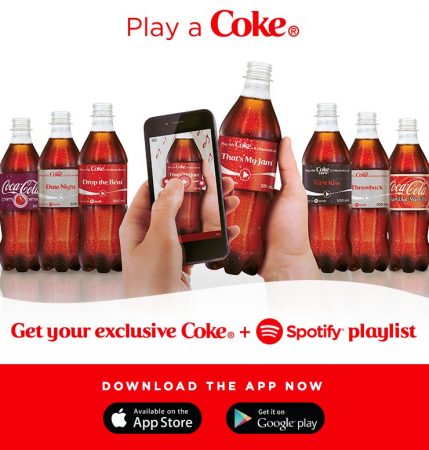 About Coca-Cola in Canada
Coca-Cola in Canada operates in all 10 provinces, and employs 6,300 people in more than 50 facilities, including six production facilities across Canada. It offers a wide variety of beverage brands, many of which come in no-calorie and low-calorie options, including sparkling soft drinks, still waters, juices and fruit beverages, sports drinks, energy drinks and ready-to-drink teas. The company offers some of the most popular brands in Canada including Coca-Cola, Diet Coke, Coca-Cola Zero, Sprite, Fanta, Nestea, Powerade, Minute Maid, Dasani and vitaminwater. Coca-Cola in Canada is represented by Coca-Cola Refreshments Canada and Coca-Cola Ltd. For more information about the company, visit www.coca-cola.ca or www.thecoca-colacompany.com.