Pretty fresh for a Dead Guy

Rogue Ales & Spirits is an agri-fermenter founded in Oregon in 1988 as one of America’s first microbreweries, winning over 1,800 awards for taste, quality and packaging and is available in all 50 states as well as 54 countries.

The updated design features a bigger and bolder Dead Guy, who has come down off his barrel, with a black, white and silver color scheme.

“There were a number of iterations, but the idea came out pretty quickly,” says Rogue creative director Hagen Moore. “We wanted to make the Dead Guy larger than life, and have him stand out in a simple and unique way.”

For the past 26 years, the Dead Guy Ale label featured a beer-clutching skeleton with crossed arms and a beehive hat sitting on a barrel (see below). 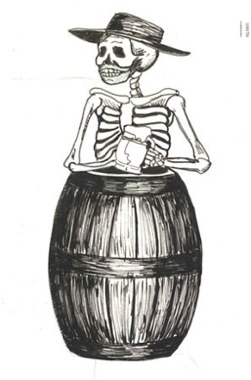 Although there have been small tweaks to the label over the years, this new look marks the first major redesign for Dead Guy Ale‘s packaging.


Related Stories
The Gorilla In The Room
Kokanee makes a fresh start with an oxygen-absorbing cap
That clean and fresh smell
Beer Can Appreciation Day! It’s Real!