A recently-approved patent on behalf of Amazon describes a parachute folded up in a shipping label for safe delivery by flying drones.

With drones already delivery packages for companies, Amazon Technologies, Inc. has patented a plan whereby a parachute deploys from the package’s shipping label to provide a safe delivery drop.

Again, this is a patent approved as of May 30, 2017 – US patent 9,663,234 B1, but it does show that inventor Jon T. Hanlon of Washington state applying for the patent on behalf of the Seattle-headquartered Amazon.

The patent is for a system that uses a label that includes a parachute of various sizes for various sized packages whereby the package can be deployed from the carrying aerial vehicle to land at the appropriate destination without damage.

According to the patent, the system can include a self-adhesive backing, parachute cords, parachute and a break-away cover.

It notes that the parachute cords can include a shock absorber—which will help reduce the force applied to the package when the parachute opens and catches air.

The parachute and/or the breakaway cover can include graphics to provide address, velocity or spin information for the package.

The parachute cords can also include a harness to separate the cords and reduce tangling and even spinning of the parachute canopy. 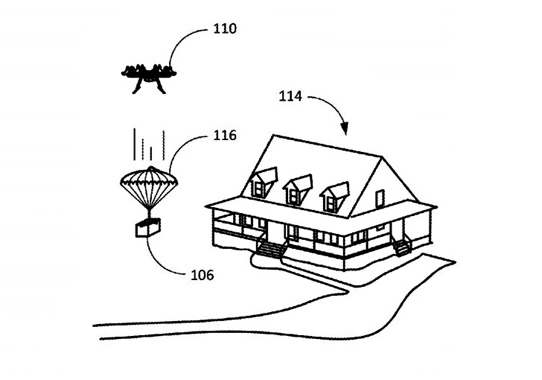 QR codes or barcodes on the package’s label could allow the drone to monitor the package down to the ground.

Of course, this is still just a patent, with no guarantee that it will ever be built, but it might be coming to a doorstep near you.