90 years of blue and white

Here's a brief early history of NIVEA and how a German product survived the hyper inflation days of post-WWI thanks to the advertising and branding efforts of its stylistic Bauhaus design.

Beirsdorf AG of Hamburg, Germany was founded in 1882 and made its initial mark with its creation of Elastoplast— a band-aid. In 1905 it created Pebeco, one of the world’s first commercial toothpastes, and in 1911, launched its iconic Nivea skincream – a brand name already used in its bar soap. The product launch was accompanied by the then-innovative marketing campaign based on print advertisements and posters, creating the Nivea woman in artform that suggested to its female customers that Nivea will make them appear more beautiful.

Then came Germany’s descent into WWI.

“We can’t change the wind, but we can adjust our sails,” said Artistotle and utilized by Juan Gregorio Clause, a former director of advertising with Beiersdorf.

After all, in his early job as a captain of a frigate, Clausen had managed to gather some experience dealing with stormy conditions. When Clausen set sail with Beiersdorf in 1920, after its defeat in WWI, the German company was marked by a deep post-war shock: starvation, unemployment and hyperinflation characterized daily life until 1923.

(Keep in mind that at this time – approximately 10 years before Nazism reared its head, Beiersdorf was largely a Jewish-owned and managed German-based pharmaceutical and skin care company.)

Thanks to people still suffering the after affects of the Great War, people only bought essential products, and Nivea Creme wasn’t one of them. 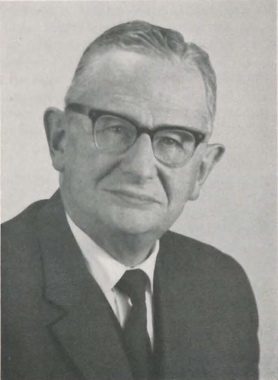 By the middle of the 1920s things were looking up again in what was then the German Reich with hyperinflation stopped, starvation defeated and jobs created – the boom period of the “Golden Twenties” had begun in 1924.

Clausen knew that German society had profoundly changed. “Youth” and “leisure” became the fashionable words of the time and skin that was tanned from time spent outdoors was the new symbol of beauty of the Weimar Republic.

The art nouveau inspired design of the cream tin from the turn of the century was perceived as old-fashioned and was increasingly disregarded by women because the “new woman” was freer and more self-confident than during the time of the German Empire. 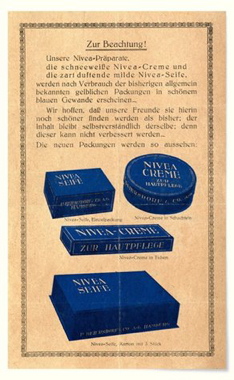 Retailer information sheet – 1925 for NIVEA products, in the original German.

From Green and Yellow to Blue
Probably inspired by sea and clouds, Clausen created a design icon with the color change of the cream tin in 1925. Fitting the avant-garde Bauhaus style of the Weimar Republic, which was marked by objective and functional representations, Clausen abandoned playful ornamentation and other visual eye-catchers and put only the brand and the product name in the center.

Clausen, as director of the ad department wasn’t really risking much with the color scheme because the same color combination was used for the toothpaste Pebeco since 1905.

Furthermore, under the Nivea brand there were already some blue and white products like Nivea Soap, Nivea Complexion Powder and Nivea Shaving Soap. So the color combination wasn’t new, but brought together with the objective representation it was a groundbreaking design development, the success of which spared the brand Nivea from being renamed Pebeco.

NIVEA Boys
But the success of the new design is also thanks to creative advertising campaigns.

With “NIVEA Boys” (see image at very top) Clausen considered a campaign that was first tested in the local newspaper environment around Hamburg and then in February 1924 run nationwide.

What was new about the campaign was the lightness and joy in the presentation of the three young Berlin brothers. There was nothing artificial or stylistically overloaded about it.

The ad campaign was a perfect match for the fresh and new design of the cream tin. 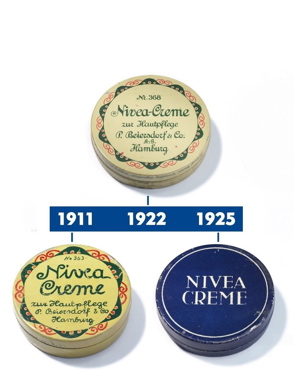 Consequently, in 1925 the “NIVEA Boys” were used to advertise the cream as well, after they were originally only going to be used for the soap.

The Nivea brand developed a fresh image with the uniform language of product and advertising. The focus was on familial relationships, but also on authenticity and joy.

With that, Nivea Creme became a successful brand product – 14 years after it went on sale.

Clausen became one of the most important people in Beiersdorf history with these groundbreaking decisions proving that early advertising that adapts to social conditions can lead to phenomenal success.

Beiersdorf AG is a German personal care company based in Hamburg, manufacturing personal care products, including such brands as Elastoplast and Nivea.