Columbia University team creating a 3D printer that will not only create edible food, but will cook it, too.

Remember the old days when TV dinners were a staple of the North American dream of ease of living?

Well, welcome to the 21st century, as researchers have come up with a 3D food printer that could revolutionize how we think about food and how we prepare it.

A team of researchers at Columbia University led by professor Hod Lipson, are developing a prototype 3D printer that they believe will one day sit in the family kitchen alongside your coffee maker, that right now looks like a coffee maker (see image above).

The printer will be able to print edible creations using a variety of pastes, gels, powders and liquid ingredients using computer software, that will – eventually – be cooked within the printer itself. 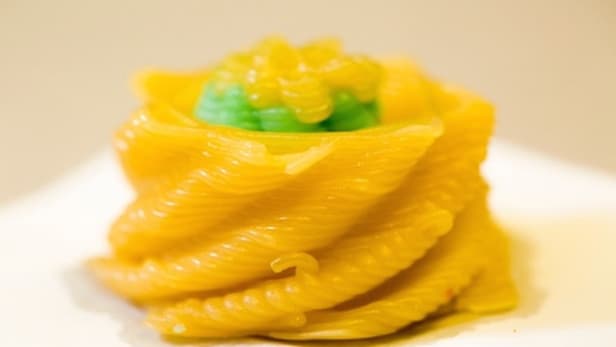 Lipson is a roboticist working with artificial intelligence and digital manufacturing. He says the team’s invention probably won’t replace conventional cooking because it won’t be able to replace all human nutritional needs, “But they will produce an infinite variety of customized fresh, nutritional foods on demand, transforming digital recipes and basic ingredients supplied in frozen cartridges into healthy dishes that can supplement our daily intake. I think this is the missing link that will bring the benefits of personalized data-driven health to our kitchen tables—it’s the ‘killer app’ of 3D printing.”

Right now, the team is working on how to cook the machine-made food within the system. The 3D printer has a robotic arm capable of holding eight slots for frozen food cartridges, with the research team trying to determine how to place an  infrared heating element into the arm.

The Columbia University team is working with the International Culinary Center, a top culinary school located in New York—specifically with the school’s director of food technology and culinary coordinator Chef Hervé Malivert to create new kinds of foods with new textures, combinations, and even spatial arrangements of basic ingredients that chefs cannot currently put together.

Via a series of lectures by Lipson and his team, the food school and Mailvert had a chance to design new dishes with computer software—to create the future of food with new shapes and geometry—with students easily 3D printing edible cream cheese.

There are currently other 3D food printers already in the wind, such as Foodini and ChefJet and others, but none cook the food within the same printing system.

Columbia University’s idea will allow the 3D printer to not merely cook the food, but to cook the different ingredients at different temperatures for different amounts of time… but it’s still in the prototype stage.

To hear what Lipson has to say about the project, watch the YouTube video below: