If you are in Silicon Valley, Ca., the next time you get the munchies you might want to try getting your pizza from Zume (pronounced ‘zoom’), a company that has created two unique manners of constructing a pizza and getting it to you in nearly half the time as conventional pizza deliveries.

Founded by Julia Collins and Alex Garden, Zume is focused on the home-delivery aspect.

With customers now ordering more pizza on-line than in-store—a growth of over 300 percent over the in-store—Zume believes its speed, quality and price-points will make it a winner.

Zume’s first foray into speed is its use of robotics to construct a pizza pie.

After a human worker places the flatten pizza dough on a conveyor, a robot Zume calls Pepe dispenses sauce at the optimal point thanks to a camera system that ensures it hits the mark in the center of the pie base.

Maria, a sauce-spreading robot, moves the sauce in a circular motion to provide a consistent and even spread across the pizza dough.

A human worker then has 22 seconds to load the pizza toppings before Bruno, the six-axis ABB robot (see image at very top) picks up and gently places the pie into the oven.

When cooked, the pizza is placed into a protective pizza box manufactured out of sugar cane to help it maintain its freshness through delivery to the consumer.

According to Zume, the robots help reduce the amount of time required to manufacture each pizza, while ensuring product consistency. It has also allowed it to cut labor costs in half even while paying its employees a higher than average wage.

Zume says that from the moment the pizza order is placed electronically to the exact moment it reaches the customer’s door, delivery is in an average of 22 minutes, just slightly under half of what the competition offers industry-wide.

Delivery is still made by people in a car, but Zume also has another concept on the go.

Pizza To Go
And then there’s the new concept of BOTW (Baked On The Way), whereby after a pizza order is placed, the pizza is made at the Zume facility par-baked at 800F, and then loaded (hot!-hot! hot!) into a pizza delivery truck: 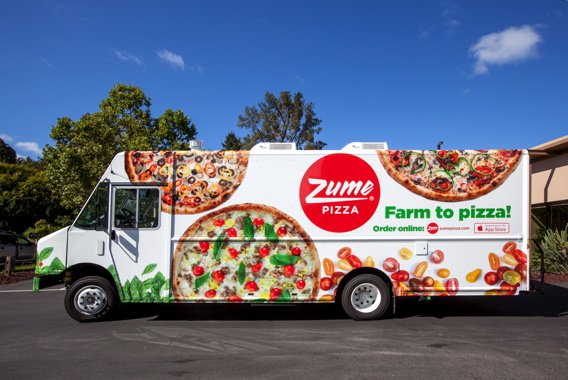 Inside the truck, the pizza is placed into one of 56 proprietary mobile ovens to finish cooking the pizza while it is being delivered to the consumer who just can’t wait.

The ovens in the pizza trucks are fully automated, so there is no need for anyone to be jostled around in front of the ovens, meaning the driver just has to drive until arriving and then needing to package the pizza.

Canadian Packaging isn’t sure how this mobile oven will really work when 20 orders come in at once, meaning 20 pizza are made and are cooked at different times, meaning 20 different final bake times in the truck, along with 20 different delivery locations.  And that’s just with 20 pizzas. Note that there are 56 ovens in the truck. How will that affect delivery time?

Canadian Packaging does like the robots making the pizza, however.