The Bird Is The Word 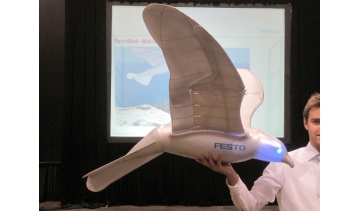 Well, everybody knows that the bird is the word, but Festo has taken things to a whole new level with its bionic SmartBird.

Demonstrated for the first time in Canada at the Canadian Manufacturing Technology Show (CMTS) in Toronto at the International Center from September 30 – October 3, 2013, Festo flew its seagull in circles around the tradeshow floor demonstrating how nature can provide inspiration for advanced automation technology.

Weighing a scant 450 grams, the Festo SmartBird is two meters long with a flapping wing span of 1.6 meters. Able to achieve a flight speed of between 25 – 30 kilometers per hour, the radio-controlled bionic bird has a flight range of about 15 minutes and two kilometers. Festo has been looking at nature for about seven years now, debuting an soft gripping elephant’s trunk, an aqua jelly fish and an air penguin. It has even recently completed work on a dragonfly that offers hovering ability—and has VTOL (vertical take-off and landing)… but that has only been seen by European audiences at this time.

Demonstration flights of the Festo SmartBird are scheduled throughout the show, but in case you are unable to visit the CMTS event, Canadian Packaging magazine did take a video for your entertainment:

Testing of the wings:

Festo is a global leader in automation etchnology with pneumatic and electric drive technology for industrial and process automation. Company information can be found at www.festo.com.